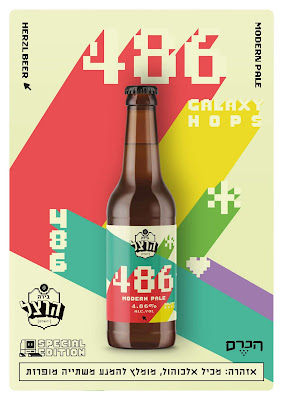 From Herzl Beer (brewed at the Malka Brewery in the Tefen Industrial Area) has come another seasonal pale ale for the Israeli summer.  It's named 486, which happens to be the exact alcohol by volume: 4.86%.  In fact, 486 doesn't hesitate to call itself "modern and exact."  Let every reader decide for him/herself what that means.  It also calls itself an American Pale Ale, which it is.

Maor Helfman, one of the founders of Herzl Beer and now Israeli beer brands manager for Hacarem Spirits Ltd., told me that 486 is brewed with oats (in addition to malted barley) and Galaxy hops from Australia.

The beer is a hazy, light orange color with a really nice creamy head.  Through the head, you get aromas of grapefruit, guava, and some pineapple.  With the first sip, you experience some strong bitterness, but this is what an American Pale Ale is all about.  There are also flavors of white grapefruit and the rind, other fruity esters and malt.

The finish is dry and bitter, enhanced by tingly carbonation in a light body.  A crisp, refreshing and flavorful beer that you should enjoy while our summer -- and the beer -- are still here.

Shmuel ("Schmulz") Naky will soon be leaving Birateinu, The Jerusalem Beer Center, following a seven year run as a partner and brewer extraordinaire.  In that time, he's brewed umpteen "Baroque" beers under the Birateinu label, and a few even more extreme bearing his own "Brewed by the Beard" label.

Schmulz's latest beer is called SCHNEIPA - Yellow Snowcone IPA, made at the Hatch Brewery in Jerusalem.  The first three letters are probably for SCHmulz, while the last five stand for New England IPA, a beer style known for its fruit juicy flavors, low bitterness, hazy color, and smooth, full body.  There have been other Israeli NEIPA's which don't exactly match these criteria.

Schmulz says that this beer represents his "vision and technique on steroids."  In addition to pale malt, he used unmalted oats and flaked wheat in the mash bill.  This was to give the beer both its haziness and creamy consistency.  He then dry-hopped the beer with plentiful amounts of Centennial, Citra, Mosaic and Taiheke -- to give intense flavor without much bitterness.

Let's see how this played out.

SCHNEIPA pours out promisingly: A murky, yellow-orange color with a small head.  There are pleasant aromas of grapefruit, peach and mango, with some background pine.  The taste is also on-style. The bitterness is mild enough to let the flavors shine through.  We're talking about more citrus, tropical fruit and fresh grass.  Throughout the drink, you get a light crispness and a medium body.  Alcohol by volume is 6.5%.

SCHNEIPA is as close to an NEIPA as I have ever had.  (About the Yellow Snowcone part, that's just Schmulz's very strained sense of humor!  The intriguing label by Nir Kleinman gives you two pudgy angels pissing on the snow.  What else?)

Black Lotus, the latest Super Heroine, is a sweet stout

I love these Super Heroes beers -- not only for the intriguing marketing concept but also because there are really tasty beers behind the concept.  Joining the first four Super Heroes, and the second female, is Black Lotus, a 6% ABV sweet stout, brewed with caramel syrup.

(The first heroine is named Sun Blaze, and she is made with maple syrup.  Could this be a pattern to keep the women "sweet"?  Refresh your memory about Sun Blaze here.)

Super Heroes, also known as Six Pack Beer, are brewed at the BeerBazaar Brewery in Kiryat Gat.  The owners and brewers are brothers Meidad Ram and Eyal Noam.

Black Lotus is not really black, but a very dark, opaque brown, topped by rapidly dissipating foam.  The aromas are unmistakably stout: Roasted malt and grain, caramel, some dark bread and light booze.

The taste is bitter with some sweet malt in the background. You get notes of dark chocolate, coffee grounds and caramel -- flavors from the malt, not from the hops. The finish is long and bittersweet. The body is medium to full, with a pleasant tingliness on the tongue.

Black Lotus is not a smooth beer -- but not sharp either.  It's not crisp -- but very thirst quenching.

All-in-all, a welcome addition to the Super Heroes team.

The Shapiro Brewery in Beit Shemesh and the HaGibor Brewery in Carmiel chose the recent Jerusalem Beer Festival ("Ir HaBira") as the venue to unveil their new IPAs for the summer.  Both of these beers are tantalizingly fruity, crisp and refreshing.  Although many people think of light lagers as traditional summertime beers, these IPAs are delicious alternatives.

To do them justice, the abbreviated IBAV Tasting Team convened to give their report especially for you, dear readers.  We chose the Eliyahu Hummus restaurant in Jerusalem's Machane Yehuda market as the location to drink the beers, eat some wonderful hummus and express our colorful opinions.

Let's begin with the Summer IPA from HaGibor ("The Hero").  Brewery partner Eran Grunwald told me that it is hopped with Citra, Magnum and Mosaic -- American hops all of which are known for their juicy fruity aromas and flavors.

Summer IPA pours out a hazy amber color, with a full, foamy head.  The aromas open with strong fruit scents, while allowing some malt sweetness to permeate through.  Mike picked up on pomelo, grapefruit and retsina (pine).  We couldn't wait to drink it.  We all tasted the fruits -- though each tongue perceived them differently.  Mike thought the grapefruit flavor,"startles the palate: I was expecting something softer.  It reminds me of the orchards along the Yarkon River, where I would go and pick the grapefruits."

Manny called attention to the tropical fruit tastes, and also peach and pear.  "I love the dry taste and finish, interacting with the fruit," he said.  "I don't necessarily consider this a summer beer; it's not lite.  [In fact, alcohol by volume is a hearty 5.9%.]  You don't gulp this beer down."

I loved the Summer IPA for its mild bitterness, which let the fruit flavors shine through.  We all enjoyed this beer and gave it a unanimous "thumbs up."

The beer from Shapiro is called Session IPA, which simply means that the low ABV (4.3%) is going to let you have more than one -- a drinking "session," if you will.

Right before we tasted it, I asked Dani Shapiro, one of the brewery's partner-brothers, how this beer was different from Shapiro's excellent regular IPA.

"Our regular IPA is darker, sweeter and with a fuller body," he explained.  "The hops we use are citrusy hops.  For our Session IPA, we use only pale malts such as Pilsner, Carahell and wheat.  The hop selection gives aromas of citrus and tropical fruits: Mosaic, Amarillo and Citra."

Session IPA is a slightly hazy, pale straw color.  "It's fizzy like a soda," said Mike, though this produced only a thin head.  We got aromas of citrus fruits and melon.  The taste was very bitter, with notes of grapefruit and undefined topical fruits.

"The bitterness hits you immediately," proffered Manny, "even before you take a swallow."  The body is light and the finish short and bitter.

If this would have been a head-to-head showdown, we would say that we preferred the HaGibor.  The hop flavors were brighter and stronger, and the beer more balanced.  But since it wasn't, we say that both of these IPAs were thoroughly enjoyable and excellent summer refreshers.