One of the many hats I wear is that of chairman of the Kiddush Club in my synagogue.  We are a small but dedicated group of serious drinkers who meet after Sabbath services for some good booze and a light repast.  Since one of my other hats is a reputable beer lover, I sometimes bring along an interesting beer or two to share with my fellows.

This past week, I wanted to express Israel's officially neutral stance regarding the Russian invasion of the Ukraine.  Israel has sensitive relations with both of these countries and simply cannot allow either one to deteriorate.  They say it's like walking between the raindrops.

So I brought a bottle of Andriivskiy Golden Ale from the Radomyshl Brewery in the Ukraine, and a can of Baltika Premium Export Lager from Russia.

"Drink the beer that suits your taste and your sympathy," I announced to the Kiddush Club members.

Within a few moments, the Ukrainian beer was drained, and the Russian beer remained untouched until I had to bring it back home with me.

You should not read too much into this.

Posted by Doug Greener at Sunday, February 27, 2022 No comments:

This year's BeerBazaar OMG is a barrel-aged Baltic Porter

Over the past few months, there's been a run of barrel-aged beers from Israeli craft breweries.

Putting beer to sleep in wooden barrels is not something new – European breweries have been doing it for centuries – but it is a practice that has been renewed by the resurgence of craft brewing around the world.

Maturing a strong-style beer in a used barrel adds depth and complexity to the aroma and flavor, and may also have an effect on the alcoholic content. The beer absorbs the flavors of the wood (normally oak) as well as of the former occupants (normally whiskey or wine).  Beers can pick up flavors such as the wood itself, and chemical compounds that duplicate floral aromas, caramel and vanilla.  The color can also darken.

Since most of the beers chosen for maturing are high alcohol by volume anyway, the barrel aging makes them even more dark, flavorful and boozy.

The BeerBazaar Brewery in Kiryat Gat, with brewpubs in Jerusalem and Tel Aviv–Jaffa, has released the fifth annual edition of its OMG, a series of strong, barrel-aged beers of different styles.  This year's version is a Baltic Porter, a stronger cousin to the traditional English-style Porter.  It was aged in whisky and rum barrels (from the Golan Distillery) for five months, and is 7.9% ABV.  It is sold in 750 ml bottles, each one numbered and only about 1,000 were released.

The Baltic Porter is a clear deep ruby color, and if poured correctly has a large rocky beige head.  The aromas are not especially complex: I got roasted malt, alcohol and oak wood.  The bitterness comes not only from the hops, but also from the roasted malt, which carries flavors of chocolate and dried fruits.  There is also the taste of oak and booze with a sour note.  You end with alcoholic warmth, spice on the tongue and a long, dry finish.

Posted by Doug Greener at Friday, February 18, 2022 No comments:

The Shapiro Brewery in Beit Shemesh recently launched its first Barrel Aged Jack's Winter Ale (Special Edition).  Although Jack's Winter Ale has been appearing regularly every winter for 11 years, this is the first time a barrel-aged version was produced.

Earlier, Shapiro issued its regular Jack's Winter Ale for 2022.  [Read about that excellent beer here.]  But don't confuse them.  That was not barrel-aged.  The barrel-aged version has the words right on the label.  In fact, it is last winter's (2021) edition that slept for 11 months in ex-whisky barrels from the Milk & Honey Distillery in Tel Aviv.  While it slept, some of the liquid evaporated through the barrel, boosting the alcoholic volume from 8.5% to 10.2%.

This powerful beer pours out a dark ruby color with a thin head and no visible carbonation.  You're overwhelmed by sweet aromas of whisky, caramel, vanilla, and of course, oak wood.  On the palate, there is a balance between the whisky bitterness and the sweet caramel from the hops, backed with flavors of molasses, prunes, raisins, and who knows what other dried fruits.  As the beer warms up in your glass, expect more flavors to emerge.

The mouthfeel brings a medium body, still carbonation and alcoholic warmth, fading to a lingering, smooth, whisky-bitter finish.  People tasting this beer for the first time may find it inexplicable, but it is to our pride that such beers are now made in Israel.

Posted by Doug Greener at Thursday, February 17, 2022 No comments: 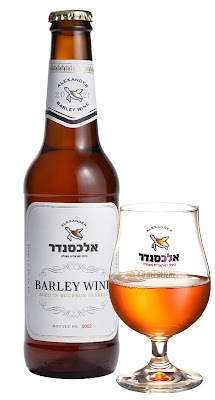 From the Alexander Brewery in Emek Hefer comes the 2021 edition of their Barley Wine, among the strongest beer styles known.  This one is 11.2% alcohol by volume, indeed similar to the alcoholic content of wine.

This is the fourth annual edition of Alexander's Barley Wine, and the first to be aged in barrels.  It slept for six months in ex-bourbon barrels, and 3,900 numbered bottles were released.

It pours out a slightly hazy reddish-copper color, with no head and no visible bubbles.  The aromas and flavors are full and complex.  You get the bitter and the sweet in good balance, with oak wood, whisky, coconut, vanilla, dark fruits and dark chocolate.  The texture is full body and creamy, heated by the alcohol.

This is a beer you should drink in little snifter glasses like brandy, and at room temperature.  It should go well with especially robust foods, strong cheeses and even creamy desserts.

The Malka Brewery in the Tefen Industrial Area, in the north of Israel, is home to three brands: Malka, Negev and Herzl.  The brewery just marked the 100th anniversary of        Hacarem Spirits Ltd. by issuing three different barrel-aged beers, each bearing the name of one of those brands.

(Hacarem is a major importer and marketer of beer, wine, spirits and food, as well as holding interests in Malka.  During the past year, Hacarem's centenary was also marked by two collaboration beers: Negev with Denmark's Mikkeller, and Malka with Belgium's Achouffe.)

All three of the beers were aged in oak barrels that previously held Glenfiddich Single Malt Scotch Whisky.  The beers were aged in the barrels for five months and were bottled by hand in numbered 750 ml bottles, before packaging in specially designed cartons.  Only 2,200 bottles of each beer were produced.  All three are powerful beers, both in taste and in alcohol by volume, which is 10%.  The strength and the style of each one make them suitable for aging.

I tasted these three beautiful beers with Manny and Mike, members of the IBAV Tasting Team and upholders of popular tastes.

The beer from Malka is a Strong Scotch Ale, a style where the malt aromas and flavors far outweigh the hops.

The color is a clear dark amber with crimson highlites; the head is thin and the bubbles are fine.  We smelled the whisky and strong chocolate and caramel from the malts.  "An inviting scent; it's certainly been in the barrel" said Mike.  Manny detected not only the Scotch, but also an aroma of Port wine.

The malts also controlled the sweetness in the taste, alongside flavors of whisky, caramel and raisins.  Manny also tasted chocolate.  The barrel aging was evident from the oak taste.  A full body completed the picture.

"A very drinkable beer," Mike concluded.  "Even Whoopi Goldberg would enjoy it."

The Negev beer is an Imperial Porter, also among the strongest beer styles, with high bitterness and flavors of roasted malt.

The beer is the blackest opaque black topped with a thin brown head.  I let the aromas and the flavors blend into a rich symphony.  Alcohol was conspicuous, of course, but also some oak, dark chocolate, caramel, roasty malt and molasses.  It is full-bodied with a long and bitter aftertaste.

Manny appreciated the beer's "freshness," but found it too boozy for his taste.  Mike had only praise for this Porter, a beer style born in and associated with his native London.  "I must have had some Porter in my baby bottle," he laughed.  "It's a shame I don't have enough British friends here to drink it with."

Herzl Beers' contribution to the trio is an American Barley Wine, hoppier and more bitter than the original English version, combined with sweetness from the malt.

This Barley Wine is an attractive hazy copper color, also with a skimpy head and bubbles slowly rising.  You get aromas of malt, dried fruits, whisky and sugar/caramel.  Like most Barley Wines, the initial taste is sweet (in this case, with flavors of caramel, raisins and alcohol), before ending in a bitter, whisky finish.

"This would be great with a hearty cholent," said Manny.  We all agreed that this was our favorite of the three -- at least during this tasting!