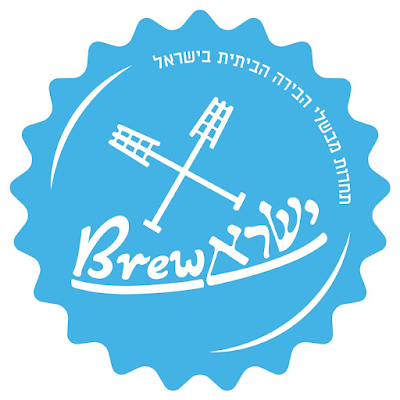 Israel used to have five or six competitions which recognized the talents and efforts of the country's home-brewers.  Last year, with the onset of the coronavirus, only one was held: Isra-Brew.  All of the entry bottles were collected and shipped to judging panels in different locations around the country.  After the entries were evaluated and the winners were chosen, the award ceremony was held on a Facebook live broadcast.

This year, Isra-Brew 2021 was held under similar circumstances, although better organized for remote judging.  Fifty-six brewers submitted their entries, and judging was again done by separate panels.  The award ceremony, however, was held live at the Beer & Beyond store in Tel Aviv.  Thirty-five prizes were awarded in the Beer categories, including Best of Show and Champion Brewer.

Prizes were also awarded in the Mead and Cider categories.  In recent years, one of Isra-Brew's chief judges, Omer Basha, has been actively promoting the production and judging of mead and cider, and that was reflected in their inclusion in the competition.

Isra-Brew is organized by the Home-Brewers of Israel community, and sanctioned by the worldwide Beer Judge Certification Program (BJCP).  All of the judges are BJCP certified to ensure a comprehensive evaluation and proper feedback to all of the entrants.

Omer, Israel's only BJCP judge with a Master ranking, was one of the judge directors.  He told me a little more about this year's Isra-Brew judging procedure.  All of the 163 entries were gathered at the Hatch Brewery in Jerusalem.  They were divided into 20 categories (16 for beer, three for mead and one for cider) and distributed to six judging locations throughout the country.

"Some of the 31 judges did the evaluation at the locations," Omer continued.  "Others, who were more cautious, took the bottles home and evaluated them via video conference.  For the first time, we typed up all the judging sheets so they could be easily read, and distributed to all of the participants.  Complete sensory evaluation and feedback is a very important aspect of the judging procedure."

The winners in all categories were decided more than a month before they were announced at the ceremony.  There was a reason for this, I learned from Omer.  "We decided to do something very different this year: To commercially brew the entries of the Best of Show and the Champion Brewer so the public would be able to taste them.

The winner of the Best of Show was an American Porter by Sabresa Brewery from Kibbutz Ein HaShlosha in the Negev.  Sabresa is a team of talented brewers that includes Nitai Leffler, Yogev Nathan, Ofer Pekerman and Meital Leffler.

The version made by HaDubim is called Mara Shchora ("Bitter Black"), a Black English IPA.  It was developed jointly by Sabresa and the Bar Ilan brothers.  I understand it is hoppier than Nitai's winning beer, made with Chinook and East Kent Golding hops, at 6% alcohol by volume.

I would call the color a clear red amber, with a thin off-white head.  The aromas were earthy: Caramel and spiced bread if I had to be more specific.  With the tastes, you get a nice play-off between the hop bitterness (citrus and grassy) and the roasted malt (dark bread, caramel and dark fruits), which is what you expect in a Black IPA.  I also found a bit of sour fruit.  The body is medium, but also what I would call "chewable."  I had the feeling this is a beer you can sink your teeth into, figuratively speaking of course.

Mara Shchora is an enjoyable enough beer, with good attributes for a Black IPA -- but here's the thing that bothers me:  It's not anywhere near Sabresa's American Porter.  Different recipe, different preparation, different style.  If the purpose of this exercise was to give the public a taste of the winning home-brewed beers, why include a beer whose only connection was the involvement of the same brewing team?

It reminded me of the museum that was displaying George Washington's original ax, you know, the one he chopped down the cherry tree with.  (Apologies to those who never learned this important piece of American history.)  The card said, "This is the original ax.  It's only had seven new handles and three new heads since then."

The title of Champion Brewer was awarded to Michael Van Straten from Moshav Klachim in the northwestern Negev, where he works as a veterinarian.  The Champion Brewer is the one whose beers amass the most awards in the competition.  Michael's Belgian Blond and Belgian Tripel took gold medals, and his German Pils a silver.

Michael has been home-brewing for eight years, specializing in Belgian-style ales. He calls his brewery Duchifat ("Hoopoe Bird"). It was his Belgian Blond that the Hatch Brewery produced commercially, labeling it Duchifat Blond.
And now it's time to test with the eyes, nose and palate. Duchifat Blond is a hazy beer, in the mid-range of pale, actively carbonated although the head doesn't hold very long. The aroma is spicy hops and a little bit of peach. A sweet taste greets you, separating into spice, malt and lemon-lime. The mouthfeel is tingly and astringent, with a dry finish. It is very delicious and refreshing. ABV is 5.7%.

If this is an accurate recreation of Michael's Belgian Blond, I can see why it came in First Place in the Belgian Strong Ale category, and why he was named Champion Brewer.