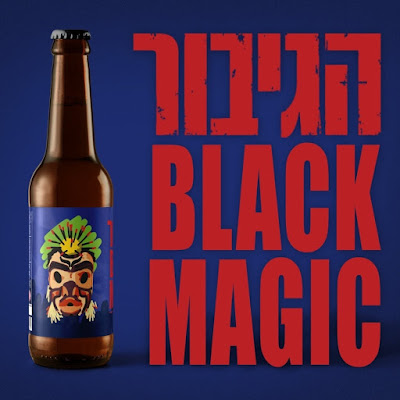 Sometimes you just have to listen and a headline writes itself.  The dream of every copywriter and blogger.

And so we have two new beers from HaGibor ("The Hero") Brewery and from Six-Pack Brewery, also known as Super Heroes Beer.  Like I said.

From The Hero we get Black Magic Stout, a traditional stout, though on the sweeter side of the street, at 6.6% alcohol.  Right off the top, let me say how much I enjoyed this beer, as I do several of the brews from HaGibor.  The brewery is located in Carmiel.

Black Magic very dark opaque brown, almost black, with a beige head.  The aromas brought to mind sweet spice like nutmeg, a little smokiness, and yeast.  The taste has stout roastiness, brown sugar sweetness, some coffee, chocolate and fruit, and that spicy background.  I've started to use the word "drinkable" to describe beers, meaning if I would buy more -- and the answer is yes.

It's a medium- to full-bodied beer with a roasty finish.  Stout is not my favorite beer style, but Black Magic does the best with what it has, and that works for me.

From the Super Heroes comes their fourth beer, Brute IPA.  It's a play on names, since Brut India Pale Ale (which itself is named after Brut Champagne) is a four-year-old beer style, born in San Francisco, with a very dry finish.  This is Israel's first Brut-style IPA.  It is made, like the other Super Heroes beers, at the BeerBazaar Brewery in Kiryat Gat. 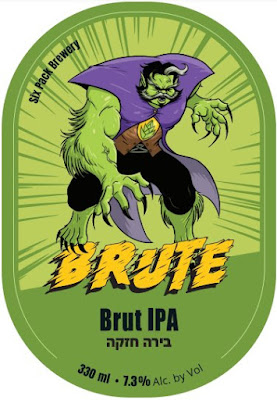 Eyal Noam, a brother-partner of Six-Pack Brewery, told me that Brute IPA is brewed with the enzyme amyloglucosidase (lucky me that I just have to write it and not say it), which is an ingredient in all Brut-style IPAs.

"This enzyme," he explains, "breaks down complex sugars in the malt into simple sugars which can then be more easily fermented by the yeast. This results is a less sweet -- or more dry -- beer. We add this enzyme in the mash, when the malted grain is mixed with hot water. We replaced some of the malt with flaked corn, which makes the beer even drier and crispier. The hops we used in Brute IPA are Citra and Nelson Souvin.

"Of all of our beers, we have gotten the best feedback from Brute IPA."

Eyal and his brother Meidad Ram are (as you might have guessed) big fans of super hero comics, which is why all of their four beers have their own super hero on the label.  He adds: "But Brute is the first one who is a villain, an anti-hero.  Notice that the symbol on his chest is upside down.  He's up to no good."

Although Brute IPA is the first commercial beer of its style in Israel, Eyal acknowledges that his friend Nir Croudo earlier home-brewed a Brut-style IPA and helped him to translate the recipe into commercial proportions.

So let's pour a glass of the Brute.  I would put its color at one shade darker than pale, very slightly hazy, with a foamy white head.  Lovely hop aromas greet your nose: citrus, pine, pineapple, as well as yeast.  The taste is bitter -- bitter fruit -- pineapple, lemon and guava.  The mouthfeel is tangy, with a dry and bitter finish.  Even though the alcohol is a sturdy 7.3%, there's no sensing it in the taste or the mouthfeel.  That comes when you stand up.

I must admit that I've never had an American Brut IPA, but the Six-Pack Brute IPA seems to have all the characteristics of the style.  It's aromatic, bitter and dry.  I thought it was delicious.  It's not the first time that an anti-hero did something right.