Who's afraid of BeerBazaar Scary Pumpkin?

Who's afraid of pumpkin ale?  Not me!

Pumpkin ales have been an American tradition for many years.  Hardly a brewery exists that doesn't make a pumpkin beer of some kind.  Those are not just brewed with added pumpkin, but they put in the whole pie -- pumpkin pie that is.  The spices that give pumpkin pie its distinctive taste are added to the beer as well: cinnamon, nutmeg, allspice, cloves and/or ginger.

From what I understand, beer drinkers either love them or hate them.  They are the butt of more beer snob barbs than any other style except industrial light lager.

BeerBazaar's Scary Pumpkin Ale is, by my count, Israel's third entry into the pumpkin beer ocean.  The Galil Brewery on Kibbutz Moran has brewed a seasonal pumpkin beer since its earliest days.  Like the other Israeli pumpkin beers, it's made with the Israeli version of the orange pumpkin, called dla'at.  The Sheeta Brewery in Arad made a seasonal pumpkin ale last year.

From the label, you learn that Scary Pumpkin is brewed from dla'at, cinnamon, ginger, nutmeg and allspice.  Alcohol by volume is a moderate 5.3%.

Let's see what comes through.

First thing, a lot of light comes through this mid-amber, crystal clear brew.  The head was thin, but that was probably because we poured it so gently.

The next thing that comes through is the aroma of pumpkin pie spices, specifically ginger and cinnamon sticks, with a bready malt background.  The first sip brings cinnamon, nutmeg, ginger and bread (or maybe that's a pie crust!).

Getting a little more technical, my drinking partner Daniël Boerstra noted that you get the full pumpkin pie effect as a retro-nasal aroma, that is, when you breathe out.

As the beer warms up, the cinnamon, nutmeg and other spices become more distinct.  "It reminds me of a Glühwein," said Daniël.  (That's about the same as a mulled wine.)

The bitterness level is low, and the mouthfeel reveals a medium body and a subtle carbonation.

We both agreed that Scary Pumpkin fulfills the role of what they call abroad a "holiday ale" or a "winter ale," giving us flavor and strength during the colder, darker months ahead.

Those readers with sharp eyes might have noticed that some of the newer beer labels from BeerBazaar state that the beers are from the HaGibor Brewery in Carmiel.  In fact, they are HaGibor core beers wearing the label of BeerBazaar.

[You can read more about the HaGibor Brewery and its beers by clicking here.]

"This is a temporary solution for us until we expand our brewing capacity," he answered.  "We simply cannot make enough beer to keep up with the demand for it.  We have a good working relationship with Eran Grunwald of HaGibor and we are marketing some of his beers under our own label."

Avi stressed, however, that BeerBazaar is maintaining its own creativity and is introducing new beers at a rate of one or two a month -- far more than any other Israeli brewery.

"Most recently," he added, "we have launched HaGanan ("The Gardener"), a rye IPA, Calamansi, our third beer using rare lemons from the Klotzman Orchards, and a Hard Apple Cider.  And we are continuing with our new beers and other beverages in spite of the many COVID-19 restrictions."

In addition, the second coming of the Nomads Saison de Zion is being sold under the Nomads own label and as the BeerBazaar Za'atar Beer.

In this case, the brewing Nomads, Yonah Rubin and Jacob Mogerman, have simply reached an agreement with the BeerBazaar (which is where they brew their beers) to market the beer under the two labels.

[Read more about the Nomads and their za'atar beer here.]

The bottom line is this:  The BeerBazaar's customer base is growing so fast, and its online ordering and home-delivery systems are so efficient, that it cannot meet the demand for beer.  By co-marketing beers with other brewers, BeerBazaar has taken a step to solve this problem, as Avi Moskowits says, on a temporary basis.

"We are working now to expand our capacity," Avi adds, "so that our beers will be available to be ordered and enjoyed by all those who want them."

Posted by Doug Greener at Monday, December 14, 2020 No comments:

Sheeta Chardonnay: "Waiter, there's a grape in my beer!" 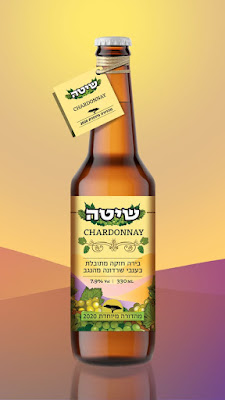 The Sheeta Brewery in Arad, founded by Jean Torgovitsky and his wife Neta, has been brewing beer with wine grapes for several years.  In 2018, they used Grenache grapes to produce a Special Edition beer which surprised and delighted aficionados of Israeli craft beer.  A year later, they brewed beers with Grenache, Pinot Noir and Shiraz grapes.  They remain the only Israeli brewery to do so.

[Refresh your memory about that beer and read some valuable background information here.]

Beer-wine hybrids have a small following in the U.S, and Europe, where innovative brewers have been adding grapes or actual wine to their fermenting beer.  Some vintners return the favor and have been adding hops to their wine.

This year, Sheeta once again collaborated with the Midbar ("Desert") Winery in using Chardonnay grapes grown near Mitzpe Ramon in the Negev.

"Chardonnay grapes are used in making some Champagne wines," Jean explained.  "They give our beer a deep yellowish color.  We planned the base beer to blend well with the Chardonnay flavor.  What we get is a raisin-sweetness and a balancing sourness." 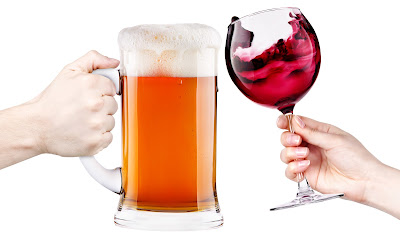 The Sheeta Chardonnay begins with a reddish-glowing copper color, hazy, and an off-white foamy head.  A nice start.  On the nose you get some yeasty white wine aromas, raisins and a hint of sweetness.  My drinking partner Daniël Boestra noticed some orange notes, which passed me by.

We both got the taste of strong malt, definite fruity grapes and alcohol.  (ABV is a solid 7.9% -- something you would expect when the grapes are adding their own alcohol to the malt fermentation.)  Even though the hops are in the background, they are just enough to balance the sweetness of the grapes.  Like with many other beers, as the beer warms up, some flavors become more noticeable.  In this case, the grapes add a dry, wine-like finish.

Daniël also expressed his admiration for the label art: a colorful pastoral scene, well designed, and a small flyer around the neck of the bottle with more information, signed by Jean.

Sheeta Chardonnay is a class act in many ways.  As you enjoy it, you should know you're giving support to one of Israel's finest micro-breweries and encouraging innovation in our craft beer industry.

Posted by Doug Greener at Wednesday, December 09, 2020 No comments:

I simply have to tell myself not to get jaded or complacent.

For the eighth time, with surprising regularity, the Alexander Brewery in Emek Hefer has won a medal in the internationally prestigious European Beer Star competition.  This time, once again, the winner was Alexander Black.  While described as a Porter, it took the Silver Medal in the Sweet Stout category.

We can safely describe that as an "award-winning beer"!  And now here's the deal (as Joe Biden would say):  It's a flagship beer of the Alexander Brewery and you can go out and buy it wherever Alexander Beers are sold.  It's brewed afresh before the winter and is almost always available.

"To use an analogy with sports," he added, "only the best compete, only the very best win medals, and very few win medals more than once.  This competition draws the best breweries in the world.  Beers are judged by professionals in a pure blind tasting, and there are only three winners in each style."

This was the 16th consecutive European Beer Star.  2,036 beers from 42 countries were entered.  Because of the coronvirus, there were no live events.  A 72-member judging panel, made up of master brewers, beer sommeliers and European beer connoisseurs, blind-tasted all the beers over two-and-a-half days, and awarded gold, silver and bronze medals for 70 different beer styles.

Instead of the usual award ceremony, the winners were announced over the internet.

[You can read about Alexander Brewery's earlier achievements at the European Beer Star here.  Follow the links back to read about 2017 and 2014 as well.]

So congratulations again to Ori Sagy and Alexander Beer for having the ambition and daring for entering international contests, and the excellent beers for winning them!

Technically a Porter, Alexander Black is brewed every year for the winter months.  It's perfect for this season, dark brown and warming (alcohol volume is a high 7%), rich in flavors of bitter chocolate, coffee and roasted malt.  This year's version is now on the shelves, so go get some if you want to taste an international prize-winning beer.