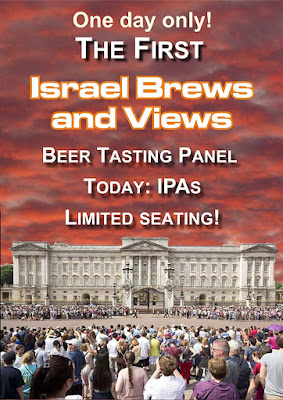 Here are two new Israeli IPAs (India Pale Ales) that I can call delicious.  Not just true to their styles with strong hop aromas and flavors, enhanced bitterness, and balancing malt -- but are also genuinely delicious.  They are made by two smaller contract brewers who are known for their highly personal and excellent craftsmanship:

HaDubim (The Bears"), owned by the brew brothers Rotem and Dagan Bar-Ilan, brewed at the BeerBazaar Brewery in Kiryat Gat,

Chalutz Chadash ("New Pioneer"), the beers of Gilad Ne-Eman, brewed at the Sheeta Brewery in Arad.

From HaDubim comes VMASH Mosaic, a rather complicated name which was explained to me by Dagan Bar-Ilan.  "This is the first in our series of Session IPAs," he said, "each one made with Vienna malt but with a different hop variety.  So VMASH stands for Vienna Malt And Single Hop.  For this first one, the hop is Mosaic, known for its tropical fruit aromas and flavors. 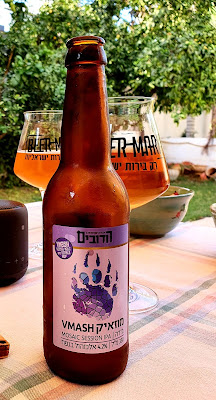 "We chose Vienna malt as the constant because, well, it's my favorite.  It's rich in flavor and brings a perfect balance of biscuit flavor and malt toastiness, with a clean, dry and medium-light body.

"By the way, 'Session' simply means that the beer is low in alcohol so you can have more than one in a 'session.'  VMASH Mosaic is 4.2% alcohol by volume."

I tasted VMASH Mosaic with my drinking partner Moshe via Zoom.  It pours out a cloudy, deep golden color with a creamy head.  The aroma is hoppy with a clean, citrus character.  The taste is bitter, less citrus, more floral and nondescript fruit, with toasted malt.  It's complex, with several different flavors coming together, but not blending, and even a little sourness in the background.  I would call the body medium and the finish dry and bitter.  All of this makes it very refreshing.  "Dew on wheat" is what Moshe thought of it.  Me, I enjoyed the flavors and the easy-drinking.

The new IPA from Chalutz Chadash is named Made in Israel, reflecting Gilad Ne-Eman's belief that all of us should now be supporting Israeli-made products.  "This beer uses the same recipe as my IPA that was awarded Best-in-Show at the London and South East Brewing Competition in 2015," Gilad explains.  "That beer was named Avodah Ivrit ("Hebrew Labor"), and I brewed it myself under home conditions.  I was fearful that the results would not be the same when we made it in commercial quantities, but the Sheeta Brewery did an excellent job.

"Made in Israel is an American West Coast IPA.  I tried to emphasize the maltiness in order to balance the hop bitterness.  But we also didn't hold back on the hops for aroma and flavor.  Since the alcohol by volume is only 5.9%, you can enjoy drinking this beer without fear of having too much alcohol."

[You can read more about Gilad's win in the London beer competition here.] 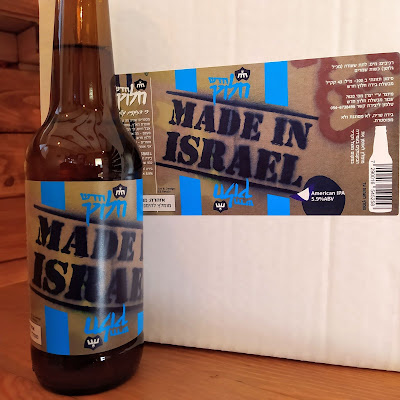 Made in Israel is a hazy, dark orange color with a thin head of foam (when we poured it).  The aroma had nice notes of grapefruit, which I always like in an IPA, and other tropical fruits and pine -- Moshe smelled "sweet apricots."  Whatever.  When we took a swig, there was indeed a strong maltiness, with red grapefruit, tropical fruits, maybe apricot or peach.  The flavor of the fruit was not quashed by the bitterness.  In fact, it shone through.  This made for a commendable balance between the bitter and the sweet of the fruit.  The body is medium and the finish is mid-bitter.  A very satisfying and flavorful drink.

These are two IPAs which are made for you to enjoy and not to overly analyze.  It's time to buy Israeli-made beer and be proud of Israeli brewing.