Amit Meltzer: From beer salesman to beer collector to brewer

The beer is Amit Meltzer's, but the picture on his bottle, coaster and glass is not.  It's his father, Ilan, to whom Amit has dedicated his entire brewing enterprise.

"He's not just my father," Amit told me. "He's my mentor and best friend."  On the bottle and the coaster, Amit writes [my translation from the Hebrew]: "Beer for me is culture, tradition, feeling and love.  My father symbolizes everything that my beer and I want to be.  Daddy -- this is for you.  Amit"

Be that as it may, Amit first became interested in beer around a decade ago when he was 26.  A chance meeting in a local bar with an agent from the Norman Premium import agency (now a part of Hacarem Spirits Ltd.) resulted in Amit being offered a very welcome job.  He began to sell imported beers across a wide swath of Israel.  He learned all he could about the beers: the brewing, the marketing, the popular tastes.

Amit also began to collect beer memorabilia.  In fact, it became a passion.  He never stopped.  His house is now bursting with over 37,000 beer coasters, hundreds of branded beer glasses, and signs, mirrors and towels from bars around the world.

Later, after he was hired to manage two restaurants in Rishon LeZion, he began to brew his own beer, using the kitchens of the restaurants after hours.  "We would offer the beer, not sell it, to customers and I saw from their reactions that they really loved it," explains Amit.

It wasn't long before Amit turned his amateur brewing into a commercial enterprise.  He now contract brews his Meltzer Beer at the Sheeta Brewery in Arad, owned and operated by Jean and Neta Torgovitsky.  "I'm brewing 3,000 liters a month," he says proudly.  "I distribute my own beer and Sheeta Beer to selling points around the country.  Meltzer Beer can now be purchased in 72 locations, and I also do home deliveries -- like I'm doing to you now."

It's true.  Amit himself delivered his popular Pale Ale directly to my home, also agreeing to sit and talk with me about his brewing and plans for the future.  "I want to brew a seasonal beer every quarter," he adds.  "Last summer, for example, I made a Special Edition Summer Ale which was very well received.

"But the Pale Ale is my steady beer and the most popular.  There is nothing unusual about it; I try to keep it a solid and faithful American Pale Ale.  I use Pale Ale, Vienna and Munich malts, and hop and dry-hop with Cascade and Citra."

The proof is in the drinking.  Meltzer Pale Ale is a semi-cloudy, dark orange color with a small but stable head of foam.  We got the aromas of different fruits, or maybe fruit syrups: citrus, apricot, peach, and berries, along with sweet malt.  The taste was moderately bitter with more fruit (couldn't detect any real citrus) and a strong malty backbone.  The finish is bitter. 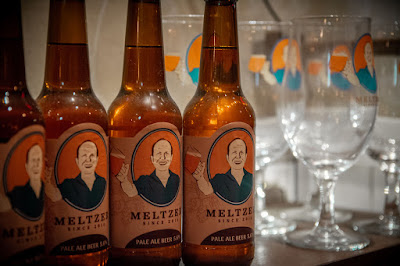 We're talking a pale ale that is solid and refined and pushes all the right buttons.  These kinds of beers are growing on me, I must tell you, staking out a middle territory that brings together the craft beer taste experience with the simple kick-back pleasure of having a cold brewski.

So thank you, Amit, for ending up a brewer.  I hope you fulfill your dream of having your own brewery, with space for a taproom and restaurant, and for a beer museum to house your growing collection of memorabilia.  Remember to invite me to the opening.