I don't know of any other brewery in Israel that is introducing new beers at the rate of BeerBazaar.  They may not last long on the shelves or in the online store, but they seem to always be making a comeback, with new ones added all the time.  If this is a marketing ploy, I think it's a good one.  Craft beer fans are always on the lookout for new experiences, new beers.  They appreciate the golden oldies, but new beers are something to talk about and share on social media and with real friends. 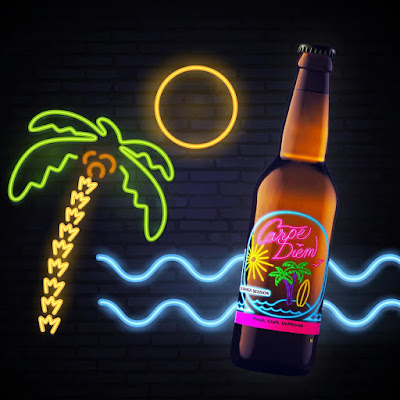 Two of the newer beers from BeerBazaar are Carpe Diem, a Summer Session Pale Ale, and Double Bhindi, a double version of their popular Bhindi IPA.  I'm not certain if they will be available at the time you read this, but if they're not, they will be back eventually.

Pouring out one shade darker and just as clear as ginger ale, Carpe Diem looks the part for a summer ale.  The 4.5% alcohol by volume makes it a "session" beer, when you want more than one.  We got lively fresh hop aromas: apricots, lemon, lychee.  The taste is mild and mid-bitter, with a touch of sour and citrus, yeast and even more apricot.  The taste gets richer as you drink it, that is, as it warms up a little bit.  American Pale Ale is a style I appreciate just to get away from the more aggressive IPAs from time to time.  And Carpe Diem fills the bill, perhaps best for summer, but welcome anytime. 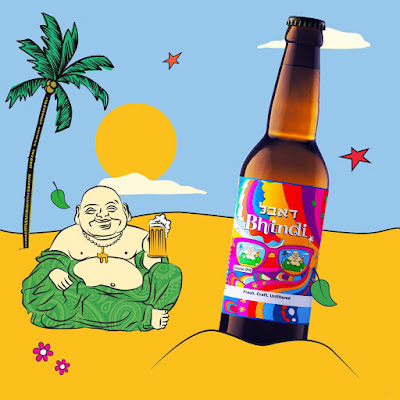 Don't think from the above that I don't enjoy strong and bitter IPAs as much as anyone else.  A good one is the second BeerBazaar offering in this write-up: Double Bhindi.  As they say on the label: "Double the hops, double the body, double the alcohol [not exactly double: 7.5%, against regular Bhindi's 5.5%]."  The colorful psychedelic label shows two of the Bhindi Bhuddas as seen through two eyeglass lenses.  Nice.

This is a semi-hazy IPA, light-copper color with a thin head.  Lots of fruit and even sweet malt is in the aroma: grapefruit, mango, passion fruit.  But when it hits your tongue, you get the powerful bitterness, although tempered by the citrus and tropical fruits, along with some caramel and dark bread.  Crispy carbonation and full-bodied in the mouthfeel.  As you get used to the flavors, the warmth from the alcohol comes in, with a short, bitter finish.

I waxed kind of poetic there, but this beer encouraged it.  My drinking partner Moshe and I felt that this Double Bhindi should be the BeerBazaar's regular Bhindi.

The Shevet Brewstillery in Pardes Hanna has come out with yet another beer in its Small Batch series.  This time a Blonde Ale.
At the start of the year, Shevet entered three of its beers in the London Beer Competition -- and in the summer (the delay was because of the severe corona epidemic in England) all of them won medals in their categories!  More about this later. 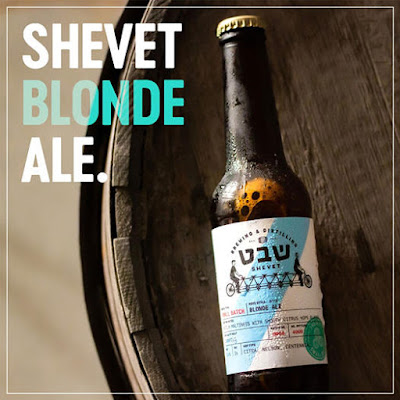 The Blonde Ale also came out earlier this year.  It may not be easy to find on the shelves, but I've been assured that it will be making a comeback.
I love the amount of information that's given on the Blonde Ale label (as with all of the Small Batch series):
●4.9% alcohol by volume
●IBU (International Bitterness Units):  26 [moderate]
●Number of bottles produced: 4,000
●Specialty malt: Carapils
●Hops: Citra, Nelson, Centennial
●Tasting notes: Medium maltiness with smooth citrus hops flavor.
Thus should it be with all beer labels!
American blonde ales, as this one is, are easy-drinking, with neither the hops nor the malt dominating, and some mild flavors in the families of grain, bread and fruit. 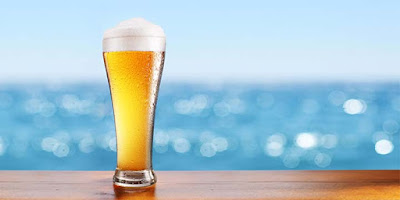 At least that's what the textbooks say.  Let's see how the Shevet Blonde Ale matches up.
It pours out a very clear light amber, lively bubbles rising but only a thin head.  The aroma is bready with some grass, spice (on the peppery side) and citrus (on the limey side).  You get a mid-bitter taste, low hop bitterness and some sweetness from the malt, also in an envelope of bread and yeast.  A thin body, active carbonation and a dry finish complete the picture.
Lior Balmas, the former Brewmaster of Shevet, under whose auspices the Small Batch Blonde Ale was made, explained that the three hop varieties used for the beer contributed aroma and flavor, but not bitterness.  This is because they were introduced in the fermenting stage ("dry-hopped"), and not in the boiling stage, which would have absorbed the bitter acids.
Lior also proudly told me about Shevet's three medals in the London Beer Competition.  "We sent our beers to London at the start of the year," he began.  "The judging was supposed to be at the end of March, but because if the corona crisis in England, it was only held in June.  That means our beers won even though they were sitting around in London for five months!  There was no public ceremony held, so we got our prizes by mail."
The London Beer Competition judges beers by their ability to identify and target a specific beer drinker, beers that are marketable and consumer driven.  Quite naturally, then, the judges are importers, store owners, pub owners, and others in the profession who have their finger on the market pulse.
"Our awards put Shevet on the same line with the best breweries in the world," Lior continued, "and Israel on the map of world beers."
◊Shevet's Small Batch IPA won the Silver Medal in the IPA category.
◊Wee Laddie won the Bronze for Scottish Ales.
◊Ice Mann, a Helles Lager, took the Bronze Medal in the category of Pale Malty European Lager.
Congratulations to the Shevet Brewstillery on continuing the excellent Small Batch series, and on three prize-winning beers.
Posted by Doug Greener at Thursday, October 22, 2020 No comments:

In a normal year, Israel has a few competitions to recognize and award talented and dedicated home-brewers.  Actually, quite a few.
But this isn't a normal year, is it?  Almost all of the competitions were cancelled because the coronavirus keeps people apart.  No tasting beer together, no award ceremonies, no shaking hands.
However, one competition, Isra-Brew, found a way to do everything according to the health guidelines, did the tasting and judging, and awarded 32 prizes to some of the country's best home-brewers.

Isra-Brew is organized by the Home-Brewers of Israel community.  It is sanctioned by the world-wide Beer Judge Certification Program (BJCP), and all of the judges are BJCP members to ensure a comprehensive evaluation and proper feedback to all of the entrants.
"This year, all of the competing bottles were delivered just before the country went on lockdown," explains Omer Basha, a competition organizer and Israel's only BJCP Master Judge.  "When things loosened up a bit, we sent the bottles to judging panels in different locations around the country.  Within a week, all of the judging was completed, we collected all of the scoresheets, scanned them and declared the winners on a Facebook live broadcast. 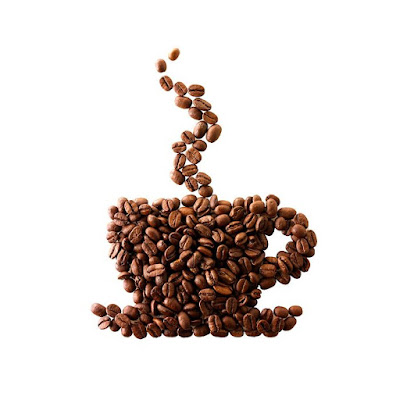 Whatever the reason, two Israeli breweries have recently brought out beers that are:
✔ Both made in collaboration with coffee roasters;
✔ Both fermented with cold-brew coffee infusion;
✔ And both, in my humble opinion, excellently crafted.
But they are very different beers.
First out was Cold Brew from the BeerBazaar Brewery in Kiryat Gat.  The base beer here is a stout, a style already known for having roasty and coffee characteristics from the malt.  The beer was brewed with the collaboration of Caffe Tamati in Tel Aviv's Carmel Market, which supplied the cold-brew infusion (as well as daily cups of coffee for the BeerBazaar staff in the Carmel Market!).
The beer is very dark brown and allows no light to pass through; headless when we poured it from the bottle. Beautiful aromas of very dark roast coffee. This stays in the flavor, along with dark chocolate. It doesn't have to be said, but because of the cold-brew liquid, this beer is much more flavorful than stouts which rely just on the malt to get their coffee character. The mouthfeel is mid-body with no alcohol warmth from the low 4.7% ABV. We felt a beer like this should have a fuller and creamier body, but that's really picking nits. Cold Brew is a fine, enjoyable beer -- especially if you love the aroma and taste of good coffee.

A while later, the Shapiro Brewery in Beit Shemesh introduced Barista Beer, a "special edition" brewed in collaboration with Coffee Shop 51 in Tel Aviv.  The base beer here is, surprisingly, a pale ale, 4% alcohol, whose malt and hop flavors blend elegantly with the coffee.
"Our challenge was to find the right 'match' between two good friends: beer and coffee," says Danny Shapiro, a sibling/partner in the Shapiro Brewery.  "Using stout would have been combining two things very similar.  So our Brewmaster, Yochai Kudler, suggested that we use a pale ale.

"The cold-brew infusion that we got from Coffee Shop 51 is brewed with Aricha washed coffee beans from the Yirgacheffe region in southern Ethiopia.  These are among the most highly-regarded coffee beans in the world, and their flavor is less on the roasty side and more fruity and sweet.  This was perfect for our pale ale base."
Tipping a hat to its origins, Barista is the first Israeli craft beer to have Amharic on the label!  If you have trouble reading it, let me help you.  It says, "Shapiro Beer."
Shapiro Chief Brewer Ory Sofer reminds us that we shouldn't ignore the interplay of alcohol and caffeine in coffee beer.  "The caffeine level is quite high because of the cold-brew infusion," he says, "and it gives you an energy kick that cancels out the drowsiness you feel from the alcohol.

"A beer like this is perfect for a day when you wake up late and can't decide whether to have your regular cup of coffee or go straight to having a beer!"
Let's go straight to having a Barista.  It pours out an appealing hazy amber color with an off-white head.  There are intertwining aromas of very fresh dark roast coffee and citrusy pale ale hops.  The taste is mildly bitter, or better yet, bittersweet with the coffee and the fruit.  You feel a crisp citrus on the tongue, backed by more coffee, nuts and orange peel.  The body is medium and smooth.
Dive into the realm of coffee beers with Cold Brew and Barista and you'll taste what all the shouting is about.  These beers pair beautifully with sweet desserts, of course (think chocolate truffles or lemon meringue pie), but also foods you would have a cup of coffee with: eggs, macaroni & cheese, a grilled cheese sandwich and even bagel & cheese.  Enjoy!
Posted by Doug Greener at Sunday, October 04, 2020 7 comments: