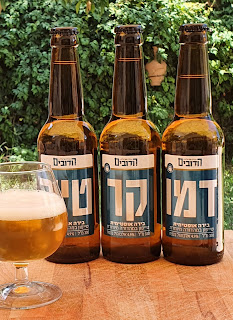 Israelis are talking a lot about democracy these days.  Is it under attack?  Is it being whittled away?  Is it as strong as ever?

Rotem and Dagan Bar-Ilan, the brother-brewers of HaDubim ("The Bears") Beer, have made a personal statement by printing three new labels for their beer which, when placed side-by-side, spell out Demo-cra-cy in Hebrew.

"Some people might object to us mixing beer and politics," says Dagan, "but for us beer is more than just a product we make.  It comes from the heart and expresses our ideals and values.

"We felt that we needed to say that democracy is one of the most important things we have, and we believe that we are starting to lose it." 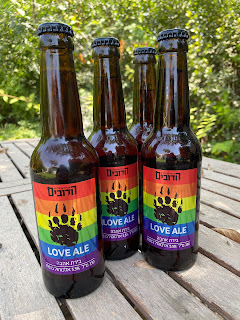 HaDubim beers are contract brewed at the BeerBazaar Brewery in Kiryat Gat.  The beer in the Demo-cra-cy bottles is Typhoon, HaDubim's very popular American Pale Ale.

This isn't the first time that the Bar-Ilan brothers have used their beers to express personal opinions.  In 2018, they brewed a Love Ale with the rainbow colors on the label, in support of the LGBT community.  Only one batch was made and it was soon sold out, but Dagan has informed me that it is now available again.  It's described as a hybrid between a pale ale and an amber ale.  [Read more about Love Ale here.]

"When we do beers like these, we try to express values that all of us can share, that unite us rather than divide us," explains Dagan.
Most of the reactions to the Demo-cra-cy labels were positive, although there were some people who didn't like the idea of mixing beer with political statements.

"We don't see any problem with this," concludes Dagan.  "Rotem and I are not just people who make beer.  The beer we brew is a reflection of who we are – as it should be for all brewers.  In fact, if a brewer from the other side of the political map would make a beer reflecting his values, I would appreciate it very much."
Posted by Doug Greener at Saturday, September 12, 2020