The new owners of the Buster's Brewery in Beit Shemesh (Noham Industrial Area) have added a new brand to their line of beverages: Good Stuff Brewing.  This is in addition to the Buster's brand of hard ciders and lemonades, Oak & Ash barrel-aged beers, and Free Spirits strong alcoholic drinks.

"Our four new beers are not only 'good stuff ' to drink," says partner and brewer Asher Zimble, "but we also do 'good stuff ' with a portion of all the sales.  We contribute to causes which are active in the fields of health, education, clean beaches, and social needs."

More about this later.

At the same time, Asher and his partner Leiby Chapler have opened a mini-pub in Jerusalem's Machane Yehuda market, called Good Stuff Pub & People (3 HeCharuv Street).  "We have a taproom at the Buster's Brewery," continues Asher, "but we wanted a place which was centrally located where more people can experience our products.  We negotiated with the owners of the Beer Market, which was at this location.  In the end, we reached a collaboration agreement, with one of the partners of the Beer Market, Alex Lobanov, joining us.  He agreed that we could change the name to Good Stuff Pub & People."

On tap at the pub are the Good Stuff beers as well as Buster's ciders and/or lemonades.  There is also a rotating tap that will have occasional beers from other breweries.  You can drink the beers at the bar or take them home in sealed liter bottles (49 shekels).  There are also kegged cocktails on tap, including lemon arak, pink lemonade and gin, and chili lime and vodka.  Take-home liters of these cost 95 shekels.  There are also at least 10 different bottles of spirits on sale.

Getting back to giving back, Asher explains that each of the first four beers is linked to a different good cause.

Let's begin with the pale and move into the dark:

Education is a Double Dry-Hopped IPA, 6.5% alcohol, brewed with pineapple, mango, and fresh hops.  A portion of the profits from this beer will go to educational projects.  One of the first, according to Asher, is contributing books in the popular Pajama Library series to Israeli elementary schools (kindergarten to second grade).  "Quench your thirst for beer," says the label, "spark someone else's thirst for learning!"

Education is a clear, pale liquid with a foamy white head.  I'm a sucker for aromatic hops, and when you combine this with real fruit, my knees buckle.  A nice mango smell, sweet tropical fruits, with plenty of citrus.  The pineapple is revealed in the taste, along with the strong bitterness, sourdough bread and pine resin.  The active carbonation dominates the mouthfeel.  A good summer beer; not to be chugged down but to be enjoyed. 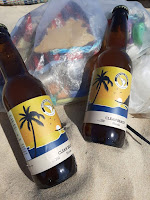 Clean Beach Blonde, as the name implies, encourages the cleaning up of Israeli beaches.  For the first project, Good Stuff ran a Facebook campaign asking readers to grab a garbage bag, go and collect trash on the beach, and send in a photo.  One of these was picked to win a case of Clean Beach Blonde.  You can keep up with new projects by following the Facebook page:
https://www.facebook.com/goodstuffpub/

Clean Beach Blonde pours out a very hazy yellow color (I'd even call it "dirty blonde") with a compact white head.  The aroma has sour notes, but more dominant are yeast, grass, and cereal grains.  Really not much from the hops.  The taste envelope is mildly bitter, holding flavors of citrus fruit, green apples, dried apricot and yeast.  The body is light, easy drinking at 5% alcohol.  A good beer to take to the beach -- but be sure to bring back the empty bottles.

A portion of the profits from the sale of First Aid Amber Ale will go to medical first reponders.  In this time of the COVID-19 pandemic, they play an even more crucial role, putting themselves in danger on a daily basis.  The first project sponsored by the beer was the distribution of 500 masks to hospitals.

First Aid Amber is a hazy mid-brown color with an off-white head.  It's on the more balanced side of the amber ale range, with aromas of both malt and hops, bread, yeast and some floral.  The taste brings more malt and grain, and light citrus.  This may not sound very exciting, but it's fine for a tasty amber ale.  The body is mid-full and smooth.  Alcohol by volume: 5%.

Warmth is a hefty Imperial Stout, 9.2% alcohol, brewed with additions of oats and brown sugar.  The warmth it refers to is not global warming, as I first thought, but providing people with emotional warmth, as Asher says, "giving people what they lack."  The first project was in support of Leket, an organization which fights food insecurity by "rescuing" surplus food from fields and restaurants, and distributing it to those in need.

As you would expect, Warmth is very dark brown, topped with a bubbly beige head that holds for few minutes.  Aromas assaulted my nose fast and furious: Roasted malt, coffee and chocolate, molasses, licorice, dark fruits and whiffs of alcohol.  Same thing with the tastes -- not easy to keep track: Chocolate liqueur, caramel, coffee and raisins.  This imperial stout was not very bitter, indicating a nice balance between the hops and malt.  As to mouthfeel, there was a pleasant alcoholic warmth, but the body was thin for this style of beer.

In general, I was impressed with the first four Good Stuff beers.  This is not the first time Israeli craft brewers have designated a portion of their sales for a good cause.  (Off hand, I can think of the Shapiro Brewery, next door neighbors to Good Stuff, which has an excellent record of helping different charities.)  But it's the first time that an entire brand has been built on this concept.

How nice to be able to put good beer in your belly while giving your conscience some nutrition as well.  It doesn't happen very often.

[The Good Stuff website is at:  www.goodstuffbrews.com ]
Posted by Doug Greener at Thursday, August 06, 2020