A visit to the Sparrow Brewery

Perhaps the most pleasant side effect of the Israeli craft beer efflorescence is the growth of taprooms or beer gardens adjacent to breweries.  Besides bringing direct, single-tier income to the breweries, they are great places to hang out with friends, enjoy good food and drink some of the best beer in Israel.

There are big beer gardens that can accommodate hundreds of visitors, and there are smaller ones that have tables and chairs for a few dozen.

On one Friday morning before the corona struck, I drove up with Israel Brews and Views Tasters Yitzchak Miskin and Mike Horton to the cozy beer park of the Sparrow Brewery on Moshav Magshimim near Petach Tikva.  I went again just a few weeks ago under very different conditions.

Before we arrived at the moshav we took short hikes in the area, carefully planned by Yitzchak, an experienced and enthusiastic hiker.  Sure they were fun, but the underlying reason was to get us even thirstier for the beer!

Owner and brewer Dror Sapir (whose first name means "sparrow" in Hebrew) has kept his beer park open through most of the shut-down period since the tables and chairs are all outdoors and well-spaced from each other.  He's open most every Friday morning (except when it's extremely hot or extremely cold), and the menu is simple: Besides Dror's own excellent beers, there is home-made hummus and malabi (milk pudding with rice and rose syrup).  The beer park is a family affair, with Dror's parents and wife pitching in.

The beers on the menu alternate depending on what Dror is brewing at the time.  My favorite is his Zythos Wheat IPA.  In fact, when I first had it several years ago, it became my favorite Israeli craft beer.  Since then, quite a few others have competed for this position, but I still recommend it highly.  [Read that early review here.]

Sparrow's other standard beers include a Summer Wheat (an easy drinking hefeweizen), a classic IPA (aromatic and fruity), Sparrowheat (a strong wheat at 6.2% alcohol), and a dry-hopped West Coast IPA.

As we feasted on his beer and hummus, Dror explained that he opened his beer park on Sapir family property on Magshimim around four years ago.

"I've been brewing Sparrow beers since 2013," he added.  "I was gypsy brewing and bringing my beers to stores and restaurants by myself.  Besides the low profit margins, I was unhappy that I didn't get to see and hear the customers' reactions to my beer.

"Here in the beer park, I cut out the middleman and sell directly to the public, and I love to get their reactions when they drink my beer."

You can occasionally find bottles of Sparrow beer at the Beer Bazaar pubs, depending on the quantity that Dror brews!

People travel to Sparrow for the Friday morning beer and hummus from miles away --Tel Aviv, Jerusalem, Rehovot -- though Dror says that 70% of his regular customers are from the moshav.  These are lucky people.  If I lived closer I would probably make the Sparrow beer park my regular Friday morning routine.
Posted by Doug Greener at Monday, July 27, 2020 2 comments:

Six-Pack Brewery, makers of the popular Super Hero beers, have introduced their first Super Heroine.  Her name is Sun Blaze, and she is a strong (7% alcohol by volume) "summer ale," enhanced with Canadian maple syrup.

Six-Pack was founded over two years ago by brothers Meidad Ram and Eyal Noam (yes, I know, they have different last names, but that's another story).  The other beers they brew now (at the BeerBazaar Brewery in Kiryat Gat) are SMASH, a single malt and single hop IPA, and Ultimus Amber Ale.

(Six-Pack beers were mentioned in earlier articles here and here.)

At the Jerusalem launch of Sun Blaze at Beerateinu, they told me that they had all but ceased brewing after their father had open-heart surgery last year and was in a coma for two months.  After he recovered, the brothers were meeting in their parents' home and discussing a new beer to begin their brewing once again.

"We mentioned a few ingredients that we could use," said Meidad, "but other Israeli brewers were doing the same thing.  Then we saw the answer on the plate in front of us: maple cookies."

They began experimenting with maple syrup, trying different recipes for their beer.  The final product was Sun Blaze, an ale containing 25 liters of Canadian maple syrup in every 1,000 liter batch, and a mix of Hüll Melon hops (also known as Hallertau Melon) from Europe and Sabro hops from Washington State.  Both hop strains are aroma hops, with Hüll Melon adding honeydew melon, strawberry and apricot characteristics, and Sabro (a very new variety) known for tangerine and coconut flavors.

Eyal continued:  "You can achieve a 7% ABV from any fermentable sugars.  But the sugars from maple syrup will give you a lighter body than the sugars from malted grain.  And that's what we wanted: a strong beer with a light body."

So after all that explanation, let's see how this works out.

Sun Blaze pours out of the bottle a hazy dark amber color.  At least that's what it was in the dim light of Beerateinu.  I was joined by two other tasters, and between us we got aromas of tropical fruit, caramel, coconut, hazelnut and some wood.  The tastes were a delicious blend of these in a  mild bitter envelope.  The mouthfeel was mid-field -- in the body, the carbonation and the alcohol "warmth."

Yet we felt that something was missing.  Oh yes, the maple.  I know.  It's not called a maple beer, and the syrup itself was used to add sugars rather than as a flavor.  But we all were hoping for at least a hint of maple.

It's a good thing we didn't give up.  As the beer diminished and warmed up in our glass, the maple aroma rose up.  Just a little bit, but enough to make itself felt.

Even without the maple, we thought that Sun Blaze is a tasty, well crafted brew.  Perhaps not a light summer beer, but a heroine nevertheless who packs a rich, flavorful punch.
Posted by Doug Greener at Monday, July 20, 2020 No comments: 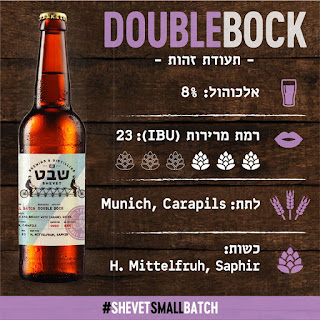 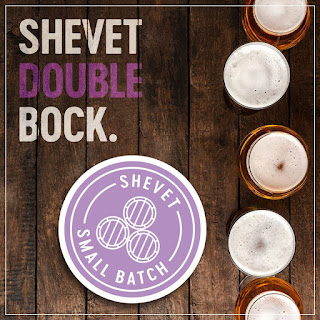 A beer for every season: Eli Ale Winter Forest

Under the banner of "new brewers and new beers," the Israeli craft scene welcomes Louis (Eli) Jay, 31, formerly from Owings Mills, Maryland, who is brewing and selling beer behind the Eli Ale label.  Louis brews his beers at the Oak & Ash (Good Stuff) Brewery in the Noham industrial area near Beit Shemesh.
It was especially appropriate that Louis presented me with his Winter Forest Oak & Hazelnut Porter on the last wintry day in Jerusalem.  After we sought shelter, he outlined his plans for Eli Ale.
"I want to introduce a new beer for every season," he explained.  "This summer, for example, we're bringing back our Summer Breeze, a light Belgian Witbier, 4% alcohol, made with orange peel and coriander seeds.  For the fall, we'd like to have an Irish Red, and then a Maibock for the spring."
Louis, who began as a home-brewer in 2012, keeps his equipment at the Oak & Ash Brewery, but insists on doing his own brewing.  "I need to be on top of all the stages: the mashing, the boiling, adding the ingredients, etc.  It's a very delicate dance that I don't want others to do for me."
Of special importance to him is achieving consistency with every batch.  "Before I started brewing commercially," he added, "the biggest obstacle was consistency.  I aimed at getting ten consistent batches before I took a beer to the commercial level."
Winter Forest is based on a recipe from Louis' home-brew days.  "We were brewing the porter at 6% ABV, but one day by mistake hit 8%.  It was so good we decided to keep it."
Winter forest is brewed with hazelnuts and aged with oak chips.  It pours out a dark opaque brown with lacy tan foam.  There's no missing the tantalizing aromas: roasted malt, dark chocolate, yeast and a little coffee.  With the taste, you get oak, nuts and chocolate in a sweet and dry package.
The mouthfeel is medium bodied, creamy, light alcohol warmth, and a little tingly from the carbonation.  Moshe, my tasting partner (we were sharing the beer via Zoom) found an "oatmeal" quality to the mouthfeel. 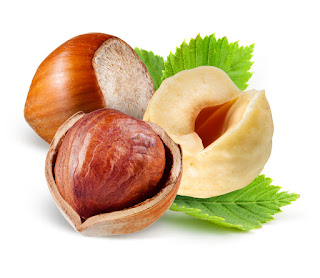 We both agreed that this was a carefully made, delicious beer.  Have it with chocolate candy, cakes or desserts to kick the flavor intensity up a few notches, or with chargrilled veggies or rich, nutty cheeses.
Winter Forest is on sale in various beer stores in Israel, and final details are being worked out for exporting several cases to the state of Maryland.
I missed Eli Ale's Summer Breeze last year, but based on the Winter Forest, I'm looking forward to trying it as soon as it appears later this year.
Posted by Doug Greener at Sunday, July 05, 2020 1 comment: