Two new beers from the BeerBazaar Brewery in Kiryat Gat helped us greet the spring -- and then promptly sold out.  I was informed they should be back in less than a month on store shelves and on the BeerBazaar's own online ordering site. 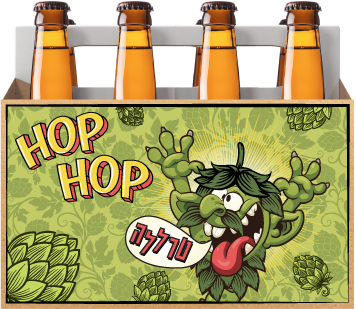 Hop Hop is a New England IPA (NEIPA), an American craft beer style that has probably already peaked in popularity, especially in these days when so many American micro-breweries are fighting for survival.

New England IPA is characterized by a very hazy to opaque color, massive fruit aroma and flavors from the hops (tropical fruits are favorites), juicy, smooth mouthfeel and low bitterness.

By my count, this is the fifth commercial Israeli NEIPA (although not all of them are still around): Alexander's Holy Fruit (read about it here), Oak & Ash NEIPA (here), Joya Gorgeous IPA (here) and Dancing Camel's The Seven C's. 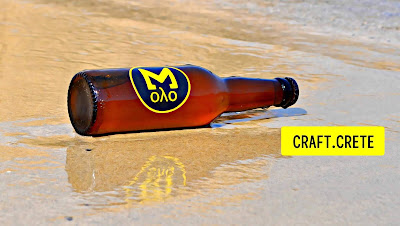 Hop Hop was brewed in collaboration with the Solo Brewery on the Greek island of Crete.  According to its website, Solo. "rather than brewing for the sake of profit, . . . comes into existence
through people, togetherness, friendship and sharing of ideas, emotions and everything that makes our moments worth living for."

Solo has a history of collaboration with brewers in Greece and other countries, including the Wuhan No. 18 Brewing Co. in China.  Just pointing that out.

Getting back to Hop Hop, it pours out a very cloudy orange color -- not surprising for an NEIPA.  Immediately there are wonderful fresh hop aromas of pineapple, grapefruit and pine; maybe some lychee fruit.  We could not detect any malt aromas, such as bready, caramel or roasted.

From what I know about NEIPAs, they should not be as bitter as this one.  Hidden behind Hop Hop's bitterness is more pine, grapefruit, tropical fruits and grass.

The mouthfeel is pleasant and well constructed: Smooth, medium-body, active carbonation and low alcohol warmth (alcohol by volume is 6.2%).  The finish is bitter pine, and it stays with you for a while.

Hop Hop is a beer that demands your attention.  You can't drink it and be thinking of something else.  Even though it defies some characteristics of an NEIPA, it's a juice bomb of a beer.  You can certainly understand why this style has become so popular.

Coming out along with Hop Hop is Honey Time, an Amber Ale brewed with Israeli honey.  Like other honey beers, the honey doesn't add much sweetness, since the yeast eat most of it, but it does make itself known in the aromas, flavors and body -- as well as a sweet note.

In the case of Honey Time, the color is mid-amber, clear but not sparkling, with a thin white head.  The aromas are faint.  Hops are not at all forward in this beer; malt and yeast do the job.  There are scents of sweet spice, honey, melon and some grass.  The taste is on the bitter side, with honey dominating but blanketed with a phenolic spice.  The mouthfeel is smooth, a little astringent, and prickly from the carbonation.  The ABV is 5.8% which is not felt at all.

I found Honey Time enjoyable and delicious.  As an amber ale with a honey taste and a dry finish, it should pair well with a wide range of foods, spicy dishes, tangy cheeses and fruity cakes and desserts.

Like I wrote earlier, Hop Hop and Honey Time are not currently available, but I'm assured by the BeerBazaar people that they will be back shortly.  Two unordinary beers from one of Israel's most innovative and market-forward breweries.