How Israeli breweries are coping with the shutdown

Israeli craft breweries are feeling the effects of the national shutdown like every other business -- but even more so!

With restaurants, bars and pubs closed to the public, beer sales are being made only through retail outlets like supermarkets and grocery stores.  Although some beer and liquor stores are open or doing home deliveries, foot traffic and sales are way down as customers are confined to their homes.

"All of our retail customers have shut down their businesses," bemoans Ofer Ronen, founder/partner of Srigim Brewery in Srigim (Li-On), brewers of Ronen and Emek Ha'ela beers.

"With all of our employees on 'vacation,' we have stopped brewing, of course, and are selling our bottled beer by direct home delivery, even though this is bringing in only about 5% of our regular revenue.  We have upgraded our website and are selling beer in 4-packs, 6-packs, and 24-bottle cartons.

"My partner Ohad Eilon and I do everything alone.  We prepare the shipments and then deliver them.  Sometimes we have to call a customer and ask if we can bring the beer late at night.  No one refuses.  When you bring beer to someone, they always have a smile on their face."

One brewery resisting the delivery trend is Malka Beer in the Tefen Industrial Area (where Negev and Herzl beer are also brewed).  Partner and brewer Assaf Lavi explains: "Our distributors and wholesalers cover enough supermarket chains and grocery stores to keep our beer moving, even in these difficult times.  Also, we think it's an ethical problem to be competing, even in a small way, with the retail outlets that are continuing to sell our beer.

"What we do on our new web page is to give a list of the retail outlets that are selling our beers by home delivery.  This seems to be a fair compromise."

Lavi noted that even if the retail sales are continuing (though much less than usual), the sale of Malka Beer in kegs to bars and restaurants accounted for 70% of turnover, and this is completely ended.  This figure appears to be the norm with all other breweries as well.

Nevertheless, Lavi is optimistic enough to believe that Israelis will be drinking their usual quantities of beer on this Independence Day (Yom Atzmaut).  For the second year in a row, Malka has prepared its beers in special bottles with caricatures of Jewish and Israeli leaders: Golda Meir, David Ben-Gurion, Menachem Begin, Chaim Weizmann and Theodore Herzl.

The Dancing Camel Brewery in Tel Aviv (Israel's first micro-brewery) is only delivering to "faithful local customers," according to owner David Cohen.  "We are now scheduling a wider distribution," he adds.

"The virus hit us at a very critical time.  Before Pesach, retail outlets order a lot less beer because they don't want to get stuck with it over the holiday.  And that's exactly when the shutdown began.  So even the recovery we were expecting after Pesach isn’t going to happen."

Cohen says that government support is now crucial if small breweries are to survive.  "We have some staying power, but it's not unlimited," he appeals.  "There is no plan in place that will save us if this continues even a little while longer.  The government has to adopt a program to help small businesses like us."

Ori Sagy, the owner of Alexander Brewery in Emek Hefer, has developed a policy of free home delivery to anywhere in Israel to keep his brewery in business.

"We advertise on social media," he explains, "asking for a minimum order of 12 bottles.  This costs 130 shekels.  Members of our Customer Club get a 10% discount, but you can join when you order and get the discount immediately."

For Israeli craft beer, this is considered a low price.  It is in line with all other breweries, who have also brought their prices down during this period.
"This is great time to buy Israeli craft beer online," Sagy declares.  "Prices are low and we will keep them low for Yom Atzmaut.  Now is the time for everyone to buy local and drink excellent Israeli beer!"

A version of this article appeared Friday, April 24, in
The Jerusalem Post local weekly, In Jerusalem.
Posted by Doug Greener at Thursday, April 23, 2020 3 comments:

The search for kosher-for-Passover beer in Israel (and throughout the Jewish world) has gone on for several years.  This year, the leading candidate is called Tipple Hop, a "Belgian Ginger IPA," brewed at the Oak & Ash (Buster's) Brewery in Beit Shemesh.

Tipple Hop was developed by Jeremy Sulzbacher, a brewer who live in Antwerp, Belgium, with family and business connections in Israel.  [Read more about Jeremy here.]

"We have been working on the recipes for these beers for five years," Jeremy said.  "Some of Belgium's leading brewers and beer experts have assisted me in making a gluten-zero and kosher-for-Passover beer.

"One of the early challenges was to convince the kashrut authorities to recognize hops as kosher-for-Passover, given their association with the beer industry."

Jeremy was able to do this to everybody's satisfaction, and Tipple Hop has been selling successfully this year in Belgium and London.  It was brewed in Israel later than planned because of the coronavirus, but is now available through the Buster's website and also at Beerateinu in Jerusalem and Beer & Beyond in Tel Aviv.

So what are we talking about?  Tipple Hop is brewed with water, hops (Cascade and Brewers Gold), fresh ginger, sugars, honey, lime juice and yeast.  It's a nice semi-hazy golden color with lively carbonation and a quickly dissipating head.  The dominant aroma and taste comes from the ginger, but you also get some hop citrus and floral notes.  The body is kind of thin, and the finish is very refreshing and satisfying.

My problem here is the same I have always had with non-malt "beers."  I put in the quotation marks after I ran back to my old Webster's New Collegiate Dictionary (1961) from my college days.  Here's what it says about "beer":


"A fermented liquor brewed . . . from malt or from a mixture of malt and malt substitutes and flavored with hops or other bitter."

In other words, without the malted grain -- or even a mixture of the grain and something else -- it's not beer.  Note, it doesn't have to contain hops, but it needs the malt.

So, Tipple Hop is a wonderful beverage, and I look forward to drinking it at my two-person Passover Seder on Tuesday and throughout the week-long holiday.  But did I feel that I was drinking a beer?  Very close, but no.

As I said, Tipple Hop is for sale on the Buster's website, and I believe if you order now, you can get your bottles before Passover.

Or this link for individual bottles (15 shekels each):

The other KfP beer that was available in Israel was Meadan Date Ale.  Though the Meadan Brewery itself ceased operation last year, the beers were brewed at the Oak & Ash (Buster's) Brewery in Beit Shemesh and were sold through the BeerBazaar home-delivery website.  These are now sold out.  [You can read more about that here, with links to earlier articles about Medan beer.]
Posted by Doug Greener at Saturday, April 04, 2020 1 comment: 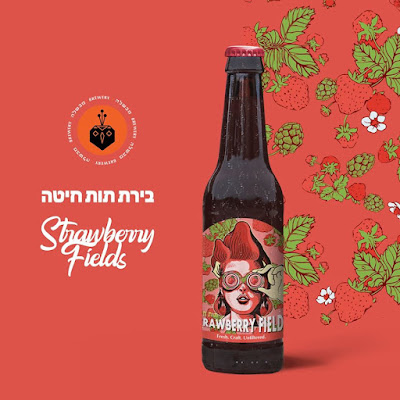 Unfortunately, there will be no more deliveries until after Pesach.  And as I said, there is no more Strawberry Fields until next winter.
Posted by Doug Greener at Thursday, April 02, 2020 No comments: