Gilad Ne-Eman of Beersheva has been brewing commercially since 2009.  He not only brews; he owns and operates the Beer House, a bar and beer garden which also sells bottled beers, and the Brew Shop, which sells ingredients for home-brewing, and offers courses, workshops and tasting sessions.  Gilad also is a founder and leader of the Home-Brewers Guild of Beersheva, one of the founders and organizers of the Isra-Brew home-brewing competition, and an organizer of the annual Beer7 Fest for home-brewers.  A very busy and entrepreneurial young man!

Gilad opened his first brewery, HeChalutz ("The Pioneer") in 2009 and introduced some very innovative beers.  In 2017, he joined with Tomer Ronen of HaDag HaLavan ("The White Fish") Brewery to form Tog. When they broke up last year, Gilad continued brewing at the BeerBazaar Brewery in Kiryat Gat under the new label, Chalutz Chadash ("New Pioneer").

Last, summer he brought out his first Chalutz Chadash beer, 4 by 4, a session IPA which is no longer brewed.

Chalutz Chadash now produces two beers which I recently had the pleasure to taste. 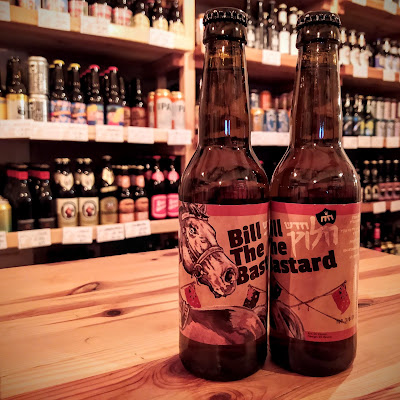 Bill the Bastard is called an Australian pale ale, mostly because the hops come from Australia (Galaxy) and New Zealand (Nelson Sauvin).  Gilad told me that the beer was made in cooperation with the Beersheva ANZAC Memorial Center which commemorates the Australian and New Zealand soldiers who defeated the Turks in Beersheva during World War I in 1917.

'Bill' was actually the name of one of the cavalry horses which took part in the battle.  "I give talks and do beer tastings for the center's staff and visitors," said Gilad, "so we thought it would be a good idea to do an Australian-style beer which has a connection with the ANZAC soldiers."

According to my research, Australian pale ales are much like the traditional British varieties.  Compared to American pale ales, they have a maltier flavor and contain less hops.

We found Bill the Bastard to be quite hoppy.  Although the label says it measures 10 IBUs (International Bitterness Units), it tasted more like 30.  It pours out a crystal clear golden color, not much carbonation.  The aroma is very fresh, yeasty, fruity and flowery -- really  conjuring up springtime and summer as we want them to be.  My drinking partner Moshe and I got tastes of citrus fruits, yeast, toasted malt, apricot and fresh cucumber.  The finish is bitter.  At 4.9% alcohol, we felt that this was the "ale" equivalent of a "summer lager."  I would certainly come back to this beer as the days get longer and warmer. 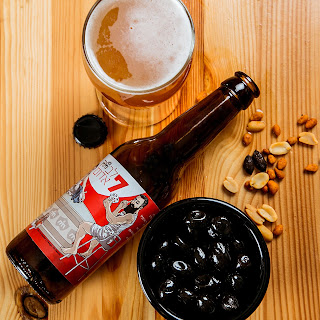 Chalutz Chadash's second beer is 7 Lev Adom ("Red 7 of Hearts"), in the style of an American red or amber ale.  Many people see this style as midway between the hoppier pale ales and the roasted malty porters or stouts.  It takes brewing skill to get that balance just right, and Gilad has done just that.

Pouring out a semi-hazy, dark amber color, 7 Lev Adom gives off refreshing aromas of grapefruit, caramel and grass, while carrying over to a dank taste of bitter citrus, malt and yeast, creamy mouthfeel, and bitter finish.  Its flavors are stronger and fuller than a pale ale, and the ABV, at 5.1%, a bit higher.

This is a good beer without novelty, refreshing and pairing well with many foods.

You can read these earlier posts on Gilad Ne-Eman and his beers:

The Isra-Brew Competition -- here and here.
Posted by Doug Greener at Tuesday, March 17, 2020