We may not be talking about earth-shaking exits, sales and mergers, but two recent events have tongues wagging in the Israeli craft beer industry.

The Buster's Beverage Company, founded by Denny Neilson, has been purchased by Oak & Ash, a craft brewery known for its innovative beers, including several aged with oak (hence its name).
Oak & Ash partners Asher Zimble and Leiby Chapler have been contract brewing their beers in different locations since they started in 2017. With the purchase of Buster's in the Noham (Sorek) Industrial Area near Beit Shemesh, they now have a permanent home. In addition, they have acquired the Buster's brand name, which includes three styles of apple cider, two flavors of hard lemonade, a line of craft beers, and spirits under the Pioneer label.

Denny Neilson -- winemaker, brewer, teacher, pioneer in the Israeli craft beverage movement, and founder of the Buster's Beverage Company -- first put out feelers to find a buyer several months ago.

"I have been working non-stop for the last 55 years, most of that time working two jobs," he told me.  "I've loved every minute of every year, but the time has come for me to be solely a husband, father, and saba (grandfather)."

His son Matt, who is heavily involved in the company's sales and marketing, would have been a natural for taking over the reins of Buster's.  But Matt has other plans for his future.

"This was a perfect opportunity for anyone interested in entering the craft beverage industry," says Denny.  "Oak & Ash were able to produce beverages and generate income from day one!  Starting from scratch would have taken 10-14 months, minimum, for anyone to reach the production level of a facility like Buster's."

Denny was looking for a buyer who was passionate about craft beverages and would make every effort to maintain the quality of the brand.  "I found this with Asher and Leiby," he asserts. 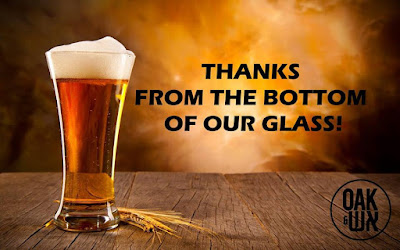 Asher says that he will continue to produce the full line of Buster's Beverages, while also expanding
the production of Oak & Ash's well-known beers.  "In fact, we just brewed 600 liters of our popular New England IPA," he continues.  "We have plans for new beers, some oak aged.  Since we are also a distillery, we have barrels which formerly held whisky that can be used for aging beer, creating, for example, bourbon barrel barley wine and stout.

"I advise you to keep your eyes open for our new beers and new liquors."

Last year, Denny exported his kosher-for Passover hard lemonade to the New York / New Jersey area.  [Read about that here.]  Asher revealed that he is now working on an order for 20,000 bottles which will be shipped to the same New York importer in time for Passover.

There is no doubt that the purchase of Buster's by Oak & Ash produces a synergy which will bring us very interesting and innovative beverages.  This perhaps is some compensation for the retirement of Denny Neilson, whose laid-back manner, friendliness and boundless knowledge of brewing helped make the Israeli craft beer industry what it is today.

Herzl Beer now being brewed (temporarily) at the Malka Brewery

Maor Helfman, owner of the Herzl Brewery in Jerusalem, has announced that his beer will now be brewed at the new Malka Brewery in Tefen, and distributed by Hacarem Spirits Ltd., which is a partner in the Malka Brewery.

"This arrangement is temporary until we find a new and bigger facility for Herzl in Jerusalem," says Maor. "Our problems have always been 1) having the capacity to brew enough beer to meet the demand, and 2) having the distribution resources to get our beer to markets all around Israel.  Brewing at the huge, modern Malka facility will enable Herzl to increase its output many times, and our distribution will be handled by the Hacarem network, which reaches all over the country."
During the time of this arrangement, Maor will serve as Beer Brands Manager within the HaCarem organization, replacing Gilad Dror, who becomes Director of the Malka Brewery.

"For me, It's like a homecoming," continues Maor.  "I worked for the Hacarem agency for four years before I opened the Herzl Brewery.  They are a very professional staff, and we have plans for new beers and logistical improvements for this year.  They also know about my chutzpa and knowledge of 'guerrilla marketing' which I hope will benefit everybody."
Posted by Doug Greener at Tuesday, January 14, 2020