News is a-poppin' at the BeerBazaar Brewery (Kiryat Gat) and chain of pubs.  Two new beers have been released, and a home-delivery project is in the beta stage. 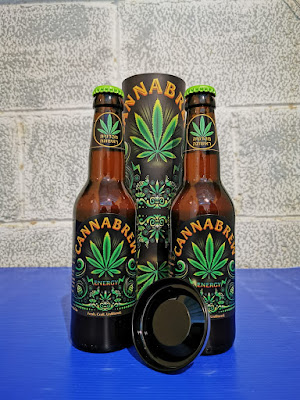 You can smell it; you can taste it -- but you can't get high on it.

"In Israel, it is not yet legal to use cannaboids, the psychoactive components of cannabis," explained Avi Moskowitz, CEO of BeerBazaar, "but the use of terpenes, the organic compounds which plants use for defense and communication, is legal."

BeerBazaar worked with a laboratory which succeeded in identifying the genetic profile of the Sativa cannabis plant and isolating those terpenes which had the qualities they were looking for.  Avi continued:  "We were able to replicate the exact components that contribute to energy and focus in the Sativa plant and from other non-cannabis plants.  Cannabrew is our first 'functional beer,' and we expect to continue to make other functional drinks leveraging this unique technology."

But there was another challenge that had to be met as well: How to get the oil-based and insoluble terpenes to blend with the beer?

"To overcome this," Avi explained, "we partnered with an Israeli start-up company that specializes in
cannabis and terpene emulsification.  Their patent-pending technology allows the terpenes in the beer to be combined into a uniform beverage.  There are no sediments; the different elements are fused into one.  You can actually smell and taste the terpenes in the brew."

I'm a beer blogger, not a chemical engineer (like my youngest son), but I was able to follow Avi's explanation and understand how very difficult this process was -- to produce a beer which has the aroma, taste and beneficial effects of the Sativa cannabis plant, and is legally permitted.

Bottles of Cannabrew will soon be available online on the new BeerBazaar website (see below).  When it goes on sale at the BeerBazaar stores sometime later, it will come in a cylinder gift package, including a special edition poster, magnet and "other goodies."

BeerBazaar plans to introduce other "functional beers" during the course of the year.  This is a new and exciting dimension in the world of craft beer, and we can hardly wait to hear more about it.

Beer from the Beer Bazaar direct to your home -- the same day!

Very shortly, you'll be able to buy Cannabrew through the new BeerBazaar home-delivery website.  The site is still taking its first steps, so not every function may be working, but in principle you should soon be able to surf over to www.beerbazaar.co.il and order Cannabrew as part of an 8-pack or 12-pack bundle.

You can already use the site to purchase other BeerBazaar beers (an 8-pack for 99 shekels; a 12-pack for 129 shekels), choosing from either pre-assorted packs or make up your own.  Currently, the site is only in Hebrew.

And here's the kicker -- delivery is free and if you order before noon, your beer arrives the same day!  BeerBazaar invested time and money in setting up a logistical network that gets the beer to you on the same day that you order.  This could be a game changer -- if all goes well.

For the third year in a row, BeerBazaar has brought out a new version of its winter super-beer, OMG.  [You can read about last year's version of OMG here.]

The year, the style is an Imperial Stout, 8.5% alcohol, aged for five months in barrels which held whisky and rum from the Golan Heights Distillery.  Only 500 numbered bottles were produced.  They are available only at the BeerBazaar pubs, where you can also buy the beer on tap.

Bottles cost 79 shekels for 750 milliliters.  Gift packages that include a cardboard cylinder, a special edition poster and a magnet sell for 104 shekels.  This is a very limited edition, so I suggest you get over to your nearest BeerBazaar as soon as possible if you want to buy a bottle or taste it from the tap.

I haven't tasted this beer yet, but I can say that it is pitch black and, according to the label, full-bodied and rich with flavors of roast and dried fruits.  It's recommended to pair with smoked cheeses or chocolate desserts.

OMG is a perfect beer for aging.  The brewers say that you can put your bottle away for up to five years and the beer will just get better.  Of course, there are those of us who can't or won't wait that long.

Stay tuned for my up and coming review of Cannabrew and this year's OMG.
Posted by Doug Greener at Wednesday, January 22, 2020