Israeli za'atar beer from the Nomads

When Yonah Rubin and Jacob Mogerman, two thirty-somethings, met a few years ago, they were brewing for other people.

"We were young kids looking to advance ourselves, and we both knew how to make beer," explains Yonah.  "So it was natural for us to think about brewing together."

Yonah had grown up in Sharon, Massachusetts (though he lived in Jerusalem as a young child) and returned to Israel in 2005.  Jacob, from St. Louis, Missouri, came to Israel in 2010.

The result of that partnership is the newest Israeli craft beer on the block -- Nomads (which they contract brew at the Beer Bazaar Brewery in Kiryat Gat).  Their first beer is made with za'atar, a Middle Eastern plant used to spice many dishes and baked goods.  It normally is not used straight, but mixed with other spices.

My internet search turned up only five other beers in the world that have been brewed with za'atar (which may or may not even exist anymore): Three in the U.S., one in Lebanon, and one from the Taybeh Brewery in the West Bank.

"The both of us thought about using za'atar at the same time," Jacob continues.  "It was amazing.  We wanted to use local ingredients in our beers, and za'atar is such an iconic and ubiquitous spice in Israel that we couldn't ignore it."

Yonah thanks David Cohen, owner of Israel's first craft brewery, Dancing Camel in Tel Aviv, for introducing him to the possibilities of using local ingredients in beer.

"When I worked at the Dancing Camel as head brewer," he recalls, "we made some of our beers more 'Israeli' by using local products."

Using za'atar, however, turned out to be a challenge. 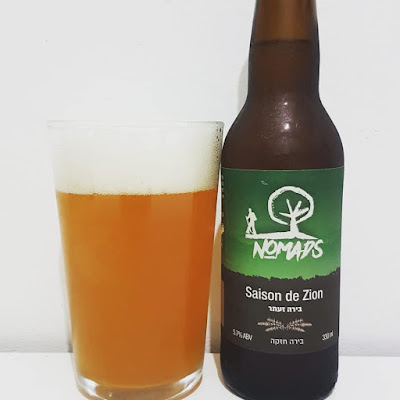 "Za'atar's oils and compounds are a lot like hops," explains Yonah.  "The flavor will dissipate if you add it during the boiling process, and all you're left with is the bitterness.  So we steep the za'atar in the beer during the fermentation stage, a process known as 'dry-hopping' -- even though we're using za'atar and not hops.  It took us three or four attempts before we got what we wanted."

This would be a good time for me to tell you about Nomads Saison de Zion (Za'atar Beer), so I will.

It pours out of the bottle a light amber color, quite clear, with strong carbonation and a large white head.  The za'atar is very present in the aroma, along with hay or grass, and yeast.  (The aroma and flavor of za'atar is something you can't mistake.)  In the taste, you get the za'atar and the typical spice from the Saison yeast -- spicy enough so that I actually felt a tingling over my tongue.  The sweet hints of the za'atar and the spice balance each other very nicely.  The beer is medium bodied and a little dry in the finish.

Since I am a big fan of za'atar on my salads and on my bread, I enjoyed this beer no end.  It begs to be drunk with foods which are enhanced by the za'atar spice -- especially hummus.

Yonah and Jacob plan to introduce more beers under the Nomad's label in 2020, also using local products, herbs and spices.

"In our age of instant and constant communication, you find the same beer styles being brewed all over the world," insists Jacob.  "We don't want to just take a foreign beer style and make it with Israeli ingredients.  We believe we are in a unique situation with all of our different immigrant groups bringing something to the table, combined with the native agricultural products that have always symbolized the Land of Israel.  We want to use this to develop a truly Israeli beer."
Posted by Doug Greener at Tuesday, November 19, 2019