An Israeli in the wonderland of American beer

First of all, I'm very happy with the variety of craft beers we have in Israel: our locally brewed beers, supplemented by some very fine imports.  What's available in Jerusalem stores, pubs and restaurants can keep me satisfied till the end of my days (whenever that is).

But on a recent trip to the U.S., I was awed by two visits with family members to a neighborhood beer hall and a brewery taproom, chosen completely arbitrarily, seeking no special or seasonal brews that get beer geeks traveling hundreds of miles.  No, that's not for me.  It was enough just to go local to experience some of the combinations and permutations of beer styles that is now the American craft beer scene.  Maybe the pessimists are right that it's ephemeral and unsustainable, but for now America is a Garden of Delights for the beer-loving visitor.

Let me give you two examples:

Our first stop was southern Florida to visit my mom and brother.  My son Ami from Washington, DC, joined us for a few days, and together with Trudy we visited the World of Beer in Coconut Creek.  WOB is a chain of 53 craft beer restaurants across the U.S., 15 or so in Florida alone.  We've been there before and thoroughly enjoyed ourselves.  [You can read about a previous visit here.]

Our attentive waiter (who also knew a thing or two about selling beer) offered us a flight of four beers.  Since we like to drink local whenever possible, we chose Florida breweries. 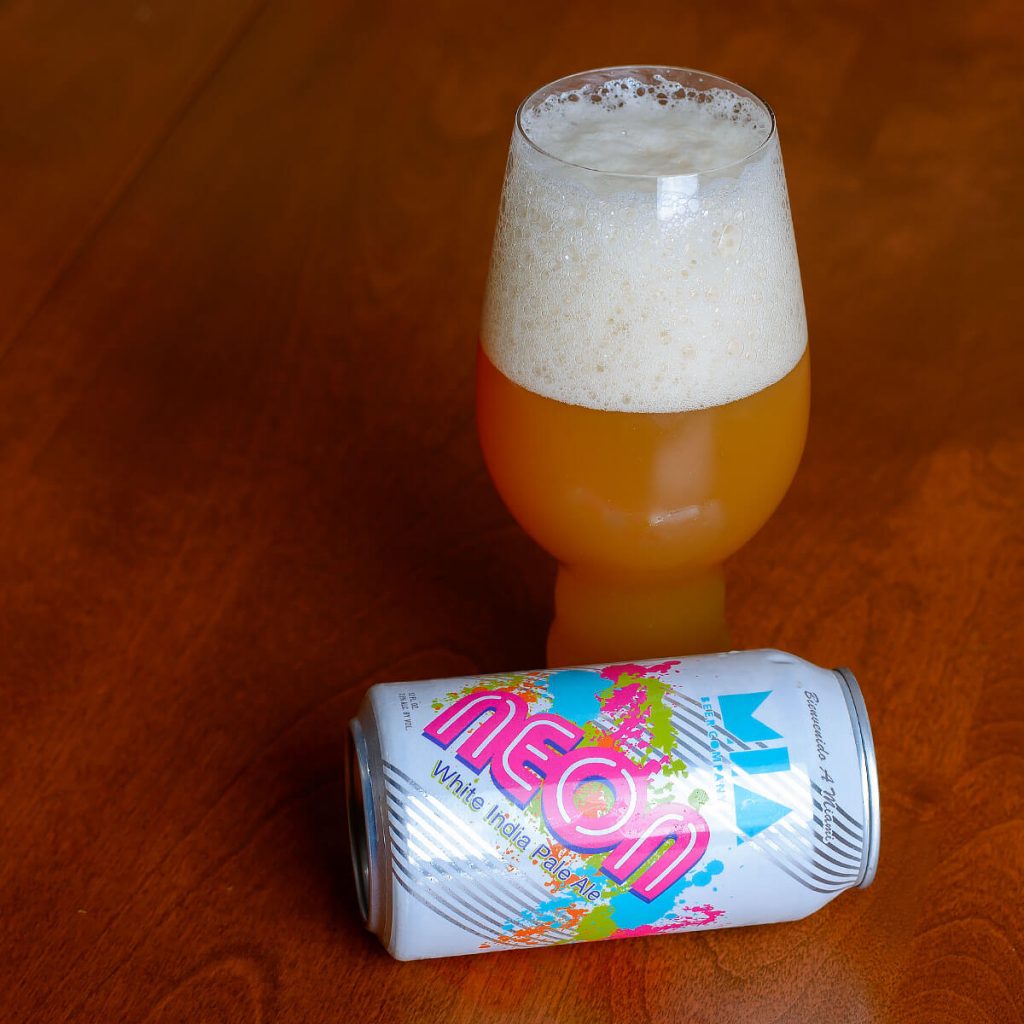 First up was Neon White IPA from the MIA Beer Company in Doral, Florida.  This is brewed with Pilsner malt and wheat, and hopped exclusively with Citra.  Alcohol by volume is 7.5%.  In our glass it was very hazy, orange juice colored, with a lovely white head.  The aroma is grapefruit and pineapple, with Ami also detecting some mango.  The strong bitterness was just right for me, but too much for Ami, who prefers his beers with lower level IBUs (International Bittering Units).

So he preferred our second glass: Bell Cow Milk Chocolate Porter from Jdub's Brewing Company in Sarasota.  An opaque dark brown with a tan head, this beer has aromas of chocolate and malt.  The taste reminded me of an old-fashion egg cream, although the lactose sweetness was kept in check by the dark malts.  ABV is 5.6%.

We ventured into different territory with Single in Havana, a Belgian Singel ale (not very commonly brewed outside of monasteries), brewed with pink guava pulp and juice.  The brewery, Barrel of Monks Brewing in Boca Raton, specializes in Belgian-style beers, and they chose this lightest of the style, with an ABV of only 4.2%, because of the Florida weather.  It's a semi-hazy, mid-amber color, and the aroma is sweet fruit and guava.  The sweetness disappears when it hits your tongue, with bitter and slightly sour guava on top.  The finish is very dry and it even left me a little breathless.  Ami was impressed with this light, refreshing and fruity beer.

Our last beer was also an "only in America" hybrid -- a Cucumber Berliner Weiss from the Florida Avenue Brewing Company in Tampa.  This is a traditional Berliner Weiss, a kettle-soured wheat ale, but flavored with a massive amount of fresh cucumbers.  As clear as ginger ale, with an aroma of sour funk, and a mildly sour taste with cucumber and crispy citrus.  This is a wonderful summer beer, and fortunately for us, it was summer in Florida.  Can't get any more summery than that!


From Florida we traveled north to the cooler climes of Cleveland, Ohio, to visit Trudy's brother Dan and his wife Carole.  Dan, a retired rabbi and psychologist, has been following my blog since its inception and was eager to take Trudy and me to a Cleveland craft brewery, of which there are about 25.  (What we didn't expect was Dan's growing enthusiasm when we began to taste the beers.)

We chose The Bottle House, a cozy brewery and taproom, because it was 1) conveniently located for Dan, and 2) was open when we wanted to go.

The brewer and co-owner, Brian Benchek, wasn't there, but the attendants were knowledgeable and helpful.  We ordered a flight of four beers, choosing them according to different styles.

First in line was Erie Coast IPA, hazy and pale and 6.3% ABV.  At the first sip, we all said "grapefruit and citrus" -- it was so dominant.  But then Dan ventured, "Maybe a little pine, right?"  Well, yeah, very good.  It was dank and very bitter, but without harshness and even a soft finish.  A well made and nicely balanced IPA.

Trudy never liked very bitter beers, but Dan and I agreed that Erie Coast got us off to a good start.

Next was La Tentadora, a 9% ABV Imperial Stout aged in Bourbon barrels with cherries and paprika.  (Who thinks of these things?)

Dark as black coffee, it had aromas of espresso and dark chocolate.  "Aren't there also cherries in the aroma?" asked Dan.  I guess so.  "Hey, this is fun.  Is this what you do?"

Well, it isn't all I do.  I do have my advertising work, and my children and grandchildren, and other hobbies.  But, yes, this is the gist of beer tasting and sharing your opinions with other people.

The taste was rich with cocoa and malt, on the sweet side, and full bodied.  Hard to detect any bourbon or oak, but that was okay.  La Tentadora is a delicious and complex Imperial Stout -- a sipping beer -- we all agreed.

What followed were two "wild," "spontaneous," or "sour" beers, whatever you want to call them.

Nova Raspberry, named a "Wild Ale," with 6.9% ABV, aged in wine barrels with raspberries and Brettanomyces yeast.  It's a lovely crimson color, like cranberry juice.  We all took dainty whiffs and voiced our associations: "berries," "sour berries," "dankness," "wet cardboard."  (This last one was from Dan, who was really getting into the flow.)  The taste was tart raspberry preserves; sour like yogurt.  Dan noted that the carbonation sharpened the sourness.  We all agreed this beer would go well with crackers and cheese, like goat cheese and mild cheddar.  As we took our final sips, we noticed that the "oomph" was gone; the tastes were not
as prominent.

We ended our flight with Duality #1, a spontaneous sour golden ale, 6.8% alcohol.  The aroma was sour and funky with bread from the malts.  There was almost no carbonation.  The taste was less sour than the Nova Raspberry, but devoid of fruit, spice or vegetable flavors.  "Rain forest green," was Dan's contribution, and "flat and not interesting."


We had gone into The Bottle House a family, and walked out a beer tasting team!  It was a great pleasure for me to see my brother-in-law Dan get turned on to the finer points of craft beer.  He always enjoyed good beer, and I'm sure this experience will make him appreciate it even more.

We thank Dan and Carole for being such wonderful hosts, for showing us around their home city, and for taking me, the old blogger, on their daily visits to the gym.  I used the occasion to show the colors for Israeli beer.

Trudy and I soon afterwards left Cleveland and returned to Israel.  We both brought back a bunch of new memories and new tastes.
Posted by Doug Greener at Monday, November 25, 2019