The 3 new beers from BEERS

When I visited the BEERS 2019 Exhibit in Tel Aviv a little earlier this year, I found three beers from commercial craft breweries being unveiled to the public.  I mentioned them in my blog post here and I promised to give more detailed reviews a little more down the line.

As I say, if I remember I made a promise, I try to keep it. 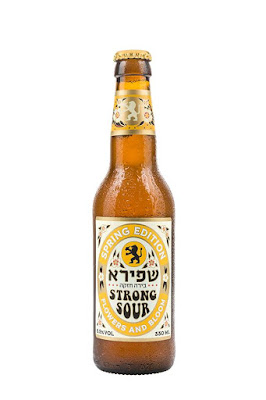 From the Shapiro Brewery in Beit Shemesh comes Israel first commercial sour beer.  They call it Strong Sour because of the alcoholic content -- 8.5% -- not because of the sourness.  It's a "kettle-soured" beer because the souring takes place in the mash kettle before the boil.  In this case, Brewmaster Yochai Kudler and Head Brewer Ory Sofer used a wild yeast which they collected from almond blossoms blooming around Jerusalem in the early spring.  (Sounds like a theme song from a 1950s movie.)

The wild yeast and accompanying microbes are what give the beer its sour taste.  When the wort is boiled, the single-cell organisms die and the souring ceases.  Afterwards, domesticated Saison yeast is added for a second fermentation.

On to our tasting:


Strong Sour pours out a hazy, orange-amber color.  The sourness is immediately felt in the aroma as sour fruit, along with citrus, floral and yeast.  It makes you want to taste what this is all about -- and what you find are more sour fruits and fruit juice.  My drinking partner Moshe and I detected flavors of apple, grapefruit and peach.  The sourness was always balanced by the malt sweetness, even as the final pourings give you a cloudier beer.  The mouthfeel is light, and the finish tart and refreshing.

When I wrote about this beer for the first time, I called it an "entry-level sour," implying that you can and should "advance" to even sourer beers.  Well, that wasn't quite fair.

If you taste and enjoy beers more sour than Strong Sour, by all means go for it.  But if you don't, if Strong Sour is the most sour you want to go, then you're in no way deficient if that's where you stop.

The same is true if you find no pleasure in any sour beer.  You shouldn't have to force yourself to like something just because it's popular or "trending."  They're your taste buds.  Listen to them. 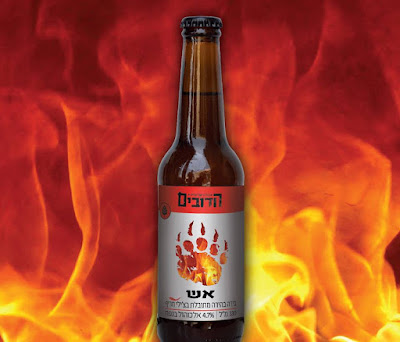 From sour to hot.  Esh ("Fire") is the new beer from HaDubim ("The Bears") Beer (contract brewed at the Beer Bazaar Brewery in Kiryat Gat).  It's a hoppy and bitter pale ale brewed with shati red peppers.

At the BEERS Exhibit, HaDubim partner and brewer Rotem Bar Ilan was offering to make Esh even hotter by adding drops of shati pepper distillate; the beer straight from the bottle is certainly not the hottest of chili beers I've ever tasted.

The hops used in this pale ale are Chinook, Amarillo, Cascade and Citra, all American craft beer hops which together add bitterness and intense floral, citrus and spice flavors.  Alcohol by volume is 4.7%.

The beer is a cloudy, mid-amber color with almost no head when we poured it.  The aroma was rich and fruity, with strong citrus scents and already wafts of pepper.  The taste is very bitter (the label gives the number of IBUs -- International Bittering Units -- as 63, quite high), with fruit flavors, notably orange and grapefruit.

Only at the end of the swallow do you feel the pepper in your throat.  It's competing with the bitterness and it really doesn't matter which wins.  Esh is a well constructed hoppy pale ale -- with a surprising hot twist at the finish.

Also introduced at BEERS is a new "single-malt and single-hop" (SMASH) India Pale Ale from the Six-Pack Brewery, the Super Hero Beers (made at the Beer Bazaar Brewery in Kiryat Gat).  SMASH IPA is brewed with Maris Otter malt and Columbus hops, very popular in IPAs for their intense bitterness and herbal-lemon undertones.  Alcohol by volume is 6%.

The Six-Pack SMASH IPA is a hazy, mid-amber color with aromas of flowers, grass and sweet fruit, including apricot.  The taste is mid-bitter, and as the beer warms up, you tend to get different flavors with every sip.  The body is full, and the finish is dry, bitter and refreshing.

Six-Pack's one other beer on the market now is Ultimus, an amber ale.  Their Heavy Hitter, a Belgian trippel ale, is no longer produced.