Shevet Brewery comes out of the shadows

I first heard of a new brewery being built in Pardes Hanna about a year ago.  People were whispering, "major investment," "ultra-modern," "nothing like it in Israel."  Curious, I tried to track it down but didn't get very far.

Then, around seven months ago, I began seeing notices on social media about a new beer brand – Shevet (Hebrew for "Tribe") – being sold in a few locations in the north of Israel.  I was able to make contact with one of the partners, Neil Wasserman, but every time I suggested that I write about the brewery, he politely told me, "Not yet.  We're still not ready."

Well, they just became without a doubt ready.  After Wasserman told me the time has come, I rode to Pardes Hanna with Mike ("Have camera, will travel") Horton and found a brewery that lived up to all the rumors about it.

Only, it's not just a brewery.  Wasserman's background (in addition to being a retired NYC police officer) is distilling.  He is a whisky collector and connoisseur, with a wide knowledge of the distilling sciences.  A few years back, even before he came on Aliya in 2015, Wasserman thought that if countries like Japan, Denmark and India could make quality whiskies, there's no reason Israel could not be doing the same.  This idea has motivated him until today.
"You're standing in Israel's first 'brewstillery,'" he proudly told Mike and me.  "We brew beer and distill whisky under one roof – and benefit from the synergy they generate.  For example, after we finish with wooden barrels for aging our whisky, we can use them for barrel-aging some of our beers.  The beer picks up added layers of aromas and flavors from the whisky and the oak.  Then these same barrels can be used to give some of our whiskies the delicious notes of quality beer.  It's a two-way street."

Wasserman introduced us to his partner Lior Balmas, a 17-year veteran of craft brewing abroad and in Israel, with a brewing diploma from Germany.  The brewstillery is the natural result of the two partners' expertise.

We admired the custom-made copper stills which were works of art in themselves, but the first aged whisky, under the Ruach label, won't be ready until at least September – and anyway, we were here for the beer.

The Shevet Brewery is visually stunning, shiny, modern and fully automated.  From the time the malted grain arrives in one-ton sacks until the beer bottles are packed, hands are only needed to press the buttons.  Conveyor tubes and piping suck the malt to the mash tun, to the kettle, mixing in the hops, to the centrifuge, to the fermentation tanks where the yeast is added and the wort magically becomes beer.

All of the tanks and equipment are self-cleaning.  The bottling line can fill and cap 5,000 bottles an hour.  I thought I heard that wrong, but Balmas repeated it: "Yes, 5,000."

There are cold storage rooms for the hops and yeast, and for holding the full bottles and kegs before they are shipped out.

Balmas didn’t want to reveal the brewing output or the total capacity of the fermentation tanks, but my impression was that Shevet is now the largest and most modern craft brewery in Israel.

Building a brewstillery of this size and quality took a major investment in property and equipment.  Wasserman was able to obtain this from a U.S.-based investment group which has other real estate interests in Israel.

"Our business plan was very calculated and methodical," Wasserman says, explaining why I and other Israeli beer lovers had to wait such a long time for Shevet to reach us.

"We introduced our beers first in stores and restaurants around Pardes Hanna," he continues, "gradually expanding the area of distribution."  Balmas adds: "We wanted to make sure everything was running well before we rolled out."

Overseeing this plan is Yotam Baras, the former owner and brewer of The Dictator beer, now in charge of marketing and sales for Shevet.

Wasserman himself gave special attention to branding the Shevet beers.  The labels are similar in typeface and style, though each beer has its own color, logo and symbol.  The first two beers are The Wee Laddie, a Scottish Ale, symbolized by a strong Scotsman in a kilt with a puppy on his shoulder, and The Ice Mann, a Helles Lager, with a hipster speed skater.  All labels share a sketch of a tandem bicycle, but each beer has its symbol interacting with the bicycle differently. 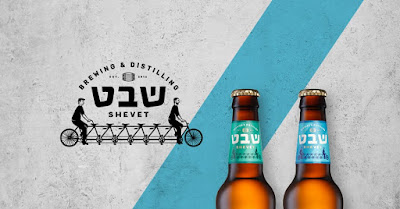 I noticed that the logo, symbols and slogans have no Jewish or Israeli associations, though there is Hebrew on the label.  This was done deliberately to give the labels an international look and feel, something that could facilitate plans to export their beers in the future.

"Our slogan is 'Hop On,'" Wasserman explains.  "There's room on our bicycle for all the tribe – and everyone can be a member of it."

After our tour of the brewery, we sat down for the serious business of tasting Shevet's two beers.  Both of them are styles which, as far as I know, are not made by other Israeli craft breweries.  "We want to highlight original beer styles that exist around the world," Balmas said.  "We can produce in Israel any beer style from any country." 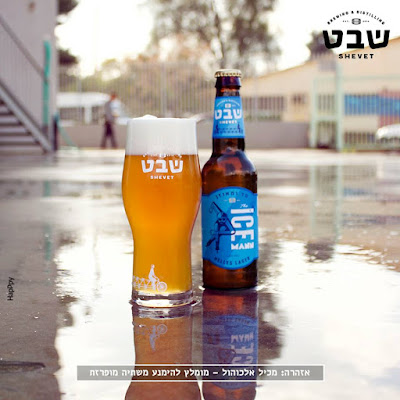 The Ice Mann, at 5.2% alcohol by volume, is a Helles lager beer that pours out a clear light amber color with a foamy but fast dissipating head.  The noble German hops, in the case Hallertauer, give the beer a sparkling aroma of spice and grass.  There are flavors of grain, malt and honey, and the finish is bitter and peppery on the tongue and in the throat.

The differences between a Helles and a Pilsner lager are very subtle.  Helles tend to be less hoppy, while stronger on the malty taste and a bit sweeter.  Obviously, there is a lot of overlapping.

(Several Israeli craft breweries make a Pilsner beer, and we reviewed some of them here.) 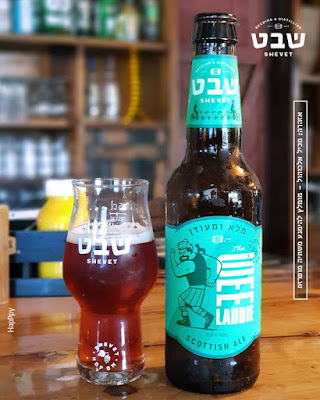 The Wee Laddie Scottish Ale (5.5% ABV) is in a different league altogether.  Its clear, dark amber color reminds you of whisky.  Malt predominates in the aroma, along with caramel.  It has a full, rich taste – sweet malt, caramel and vanilla.  As the beer warms up, the flavors are enhanced, yet remain balanced between bitter and sweet.  A very enjoyable drink.

Scotch Ale is also known as "Wee Heavy," and the name Wee Laddie was chosen to show that, although it's in the same family, it's not as strong as its big cousin.

For the future, Wasserman says that Shevet will slowly expand its distribution throughout Israel, as well as add more beers to its repertoire.  "These may be more of our flagship beers," he explains, "or seasonal beers, limited edition beers, and premium barrel-aged beers.  In addition, our first Ruach whiskies should be hitting the market later this year.  We're also developing our facilities to include a Visitors' Center, and a separate building for barrel storage and whisky tasting.

"Wait until we're done.  There will be no other place like this in Israel."

There's no doubt that Shevet is out of the shadows for good.

A version of this article is appearing Friday, August 2, in
The Jerusalem Post Magazine.
Posted by Doug Greener at Tuesday, July 09, 2019