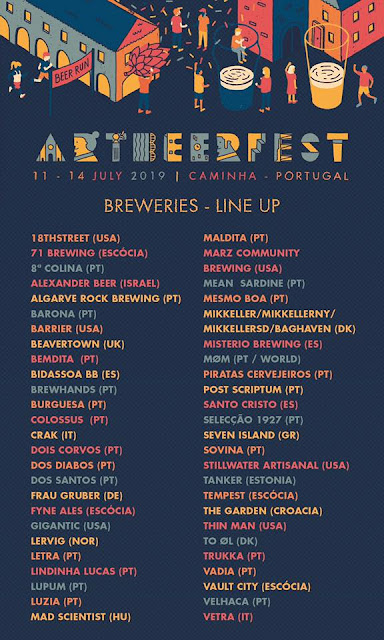 Mr. & Mrs. Old Blogger are taking time off from the hectic schedule of retirement and traveling to Portugal for a week, and thence to the U.S. for two more.

While in Portugal, we will visit Lisbon, Porto and Caminha.  This last little city, snug on the northern border with Spain, is home to the huge ARTBEERFEST, which we will attend on the last night, July 14.  The organizers have lined up 50 participating breweries -- mostly from Portugal, but also other European countries, the U.S. and, for the first time, Israel.  Yes, the Alexander Brewery from Emek Hefer will be representing Israeli craft beer.  I'll be meeting owner and brewer Ori Sagy there and reporting back to you how the Europeans are reacting to Alexander beer.

I understand there might be other exciting news for me to report about, so stay tuned.

I'm also meeting the indefatigable Octavio Costa, whose event organizing company is responsible not only for the ARTBEERFEST, but for at least five other beer festivals in Portugal, and Mario Beltran from the Lervig Brewery in Norway, whom I became acquainted with a few years back via my blog.

My wife Trudy thinks we're taking a vacation in Portugal.  I think that we're going to a big European beer festival.