Lots of beer festivals coming up this week (and for the rest of the summer, natch!), and as I find out about them, I'll try to pass them on here.

Don't know much about this one at all.  Just a pretty advertisement without any connections for further information.

We're talking about Tuesday, July 2, at the Ami Amphitheater in Dimona.  Dozens of different beers, food stands and live appearances including the famous Pablo Rosenberg.  The gate opens at 6:30 p.m. and admission is free.

The Arava Brewery from Tzukim (practically a neighbor of Dimona) will be launching a new beer, tentatively called 001. 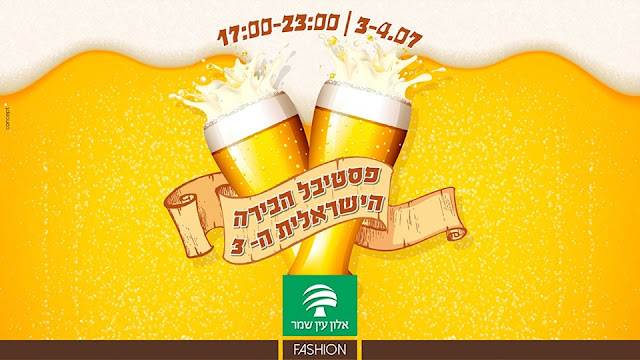 It takes a special kind of Israeli chutzpah ("brazenness") to call a local beer festival, "The Israeli Beer Festival."  But they say that's what makes us who we are, so who am I to argue.

Actually, this sounds like a pretty well thought out beer festival.  It's taking place Wednesday and Thursday, July 3 and 4, at the Alon Ein Shemer Fashion Mall at the Karkom Intersection.  Doors open every day at 5:00 p.m. and close at 11:00.  Admission is free.

Also, lots of varied food trucks will be on hand, including Numa selling vegan specialties.  There will be live music from The Paz Band, OSOG, and Sivan Talmor.  A lane of stores will be offering jewelry, crafts and other products while street performances go on.

The fifth annual Tekoa Beer Festival is taking place this Thursday, July 4, in the courtyard of the Arts Center in Tekoa (Gush Etzion).  Doors open at 8:00 p.m.

There will be food, of course, and music by Knesiyat Hasechel (The Mind Church).  There is an entrance fee of 70 shekels at the door, or 60 shekels if you pre-order the ticket (which you can do here).  The first beer is free.

As far as I understand, all the exhibiting brewers at the Tekoa festivals are home-brewers from the area.  This makes the festival a lot more curious and interesting than others.  Down-right homey.  I haven't been able to attend the previous ones, but I'm going to try for this one.
Posted by Doug Greener at Sunday, June 30, 2019 No comments:

This year, the Isra-Brew home-brewing competition drew 101 entries, and awards were given in nine categories, plus Best-in-Show and Champion Brewer.  The organizer was Dvir Flom of the Home-Brewers Guild of Beersheva.  The award ceremony was held at the Dancing Camel brewery and restaurant in Tel Aviv, with Dvir acting as the MC.


The organizing committee was thoughtful enough to have brought to the ceremony all of the left-over bottles of beer that were entered into the competition -- and they were cold!  After the ceremony, all of the participants were able to help themselves to whichever beers were available.  So we not only met the winners, but in many cases, drank them.

Here is the official list of winners, with the "names" and styles of the beers (where available).  Some categories received less than three prizes; some received honorable mentions.

Champion Brewer (with all prizes taken into account)
Tony Fall

Readers of my blog will recognize the names of some of the winners, who have been collecting prizes for several years now.  Other names are newcomers.

One of these took the Best-in-Show and Champion Brewer prizes, Tony Fall.  Earlier, Tony won prizes in the Mivshalim competition in Beersheva, the HaDubim Clone contest, and the first-ever BeerYamina home-brew competition. (Read about that here.)

Tony wasn't able to be at the award ceremony, but I did get a chance to interview him on the phone.  Alas, his Best-in-Show American IPA was all gone, so no special tasting for the old blogger.  I'll certainly try to be around the next time Tony enters one of his home-brews in a competition.

Tony is 52 and from Blackpool, England.  He came to Israel as a volunteer on a kibbutz in 1987, where he met an Israeli girl.  Tony stayed with her and with Israel.  They live in Jerusalem and have two grown sons.

Although Tony managed pubs and restaurants in England for many years, he only started home-brewing here in Israel around two years ago.

"My wife was against it because of the smell," he admits, "so I found a way to hide it from her.  I would brew when she wasn't home, then aerated the kitchen and used a deodorizing spray.  One day I gave her the beer, and she liked it so much she agreed that I could continue brewing."

He started entering competitions after receiving a lot of positive feedback from his early brews.  Tony today brews on his balcony using electric heating and the all-grain system.

"I have a good day job in hi-tech," he says, "so I'm not rushing to become a professional brewer.  But I think all of us dream about having our own brewery one day.  Who knows?"

Tony's success across several competitions has very rapidly elevated him to one of the top home-brewers in Israel.  As I've written before, home-brewing provides the broad base of a country's craft beer culture, and it's built on the skill and inspiration of folks like Tony Fall. 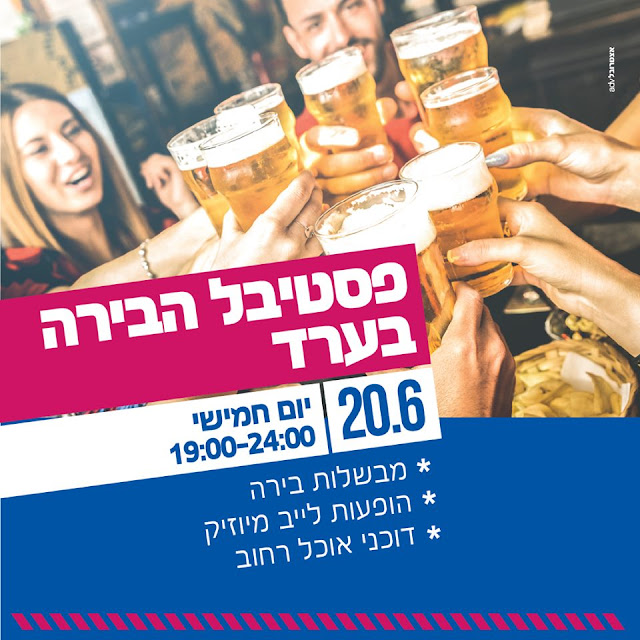 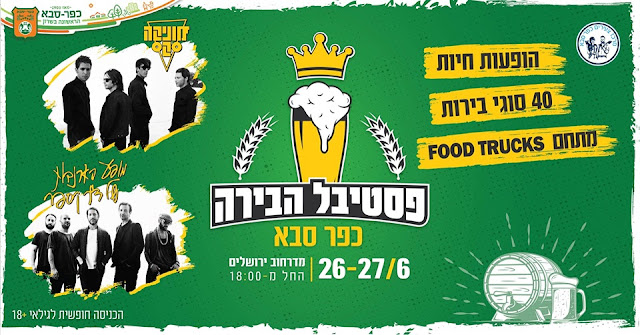 Kfar Saba Beer Festival Wednesday, Thursday, June 26-27
The Kfar Saba Beer Festival has been around for quite a few summers, and it's back this year on Wednesday and Thursday, June 26-27, opening each day at 6:00 p.m.  It's taking place on the Jerusalem Pedestrian Mall and entrance is free for those over 18.  Children under the age of 10 are allowed in only when accompanied by an adult.

Of course, there will be "dozens" of beers from local and overseas breweries, food stands, places to sit, drink and eat, and live performances including Monica Sex and Dr. Caspar.

If you sign up here (in Hebrew) before the festival -- https://www.eventer.co.il/ys4h3 -- you can buy three glasses (250 milliliters each) of beer for 55 shekels, and five glasses for 89 shekels.  The first fifty to sign up will also get a free branded gift!

I get the feeling this is going to be a good one.  I'm sorry I won't be able to be there, but I'd love to hear about it if anybody wants to report.
Posted by Doug Greener at Wednesday, June 19, 2019 No comments:

Home-brewers! Use your talent to support a great cause!

I'm sure you all remember that last year I wrote about an amazing day care center in Jerusalem for adults with cerebral palsy and other severe physical disabilities.  It's called Tsad Kadima ("A Step Forward") and once a week, the center is turned into a brewery which is operated by the participants themselves.  Their beer, Kadima Beer, is sold to help support the center.

(If your memory needs a little refreshing, please take a few moments to go back and read "The most unusual brewery.")

Tsad Kadima is doing wonderful work for the community.  It's a project worth everyone's support.  And the fact that they have chosen to make craft beer one of their activities -- well, that just brings it close to perfection!

If you're a home-brewer, you have a great opportunity to help Tsad Kadima and in the process bring your beer to the attention of thousands of Jerusalemites.

On July 11, Tsad Kadima is holding a Kadima Beer Festival at the First Station, the old Turkish railroad station on David Remez Street.  Avi Colodner, the head of the Adult Day Center, is calling on home-brewers to contribute their brews at the festival.  "The beers will be sold by Tsad Kadima," explains Avi, "and all the proceeds will be used to support our activities.  Every home-brewer will be given a table, plenty of ice, and a chance to interact with the thousands of visitors we expect at the festival."

If you would like to take part in this very worthwhile project, please call Avi Colodner today at 050-990-9179, or e-mail him at colodner@gmail.com.  You can tell him the old blogger sent you.  Your beer will thank you for it.  Where else can it not only taste good, but also do good? 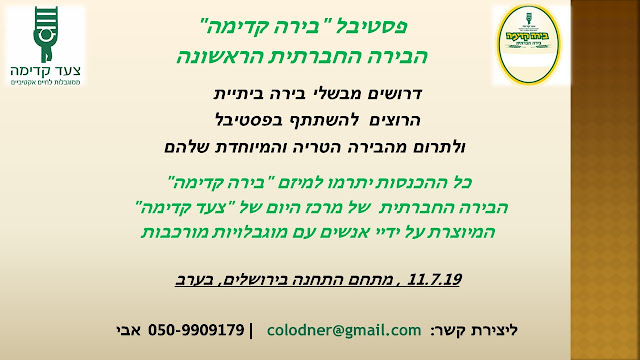 The first Yavne Beer Festival Thursday, June 6
According to this, the central city of Yavne (between Tel Aviv and Ashdod) will have its first beer festival on Thursday, June 6, in the courtyard of the Municipality (50 Duani Boulevard), from 6:00 p.m. to 11:00 p.m. Entrance is free.

The publicity promises that there will be over 45 different beers from local and foreign breweries. Food trucks will be on site with dishes suitable for vegans, vegetarians and even carnivores. Live entertainment will be provided by Jane Bordeaux and the Overtone Band. Discount tickets will be available for buying three, four and five glasses of beer.

It appears that this festival has been organized by Alechko Neznansky, a young entrepreneur who has organized other beer festivals and non-beer festivals, including Modi'in. If you have any questions, you can write to Alechko at: alechkopro@gmail.com

It's called the Beer Create Community, but in effect it's the very excellent beer festival organized in Beersheva by the Brew Shop Israel, owned and operated by Gilad Ne-Eman. It's taking place this Friday, June 7, at the Brew Shop, 32 Herzl Street, from 11:00 a.m. until 3:00 p.m. Home-brewers from Beersheva and the Negev area will be pouring their beers, and there are always superb choices. Works of art by local artists will also be on display.

Entrance is free -- but if you want to drink beer (why else would you come?), you have to buy a tasting glass for 10 shekels, and then pay 15 shekels for every 200 milliliter taste. Having been there more than once, I can tell you that it's worth it.