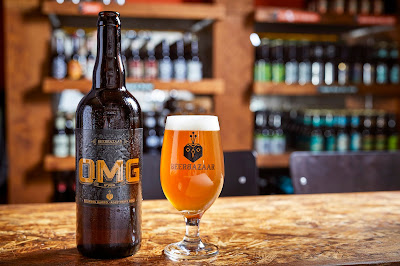 For the second winter in a row, the Beer Bazaar Brewery in Kiryat Gat (and with six pubs in Jerusalem and Tel Aviv-Jaffa), has brought out its winter superstar, OMG (Oh My Goodness).  Last year, it was an English Strong Ale, aged in whiskey barrels.

This year, it's a Doppelbock lager aged in American oak bourbon barrels for four months.  Alcohol by volume is 7%.  OMG is available only at the Beer Bazaar pubs, either on tap or in 750 ml bottles.  Only 498 numbered bottles were produced, and they cost 69 shekels each.

I tasted the 2019 OMG from the tap at the Beer Bazaar in Jerusalem's Machane Yehuda market.  It was dark amber in color, thin-headed and fizzy.  There were enticing aromas of apples, vanilla and honey liqueur.  The taste was sweet with rich malt, vanilla, butter scotch candy, and burnt caramel.  There is a nice ending of some sourness and bourbon flavor, but without the alcohol feel.  For such a strong beer, it is very well balanced.

For me, it's a stand-alone beer accompanied maybe by a few munchies.  The label suggests that it would pair well with "winter casseroles" and other strong flavored dishes, but I am skeptical.

OMG is a big, beautiful beer, and Israelis should be proud that we're making it.  Okay, so it's not the same as landing on the moon, but kudos to brewmaster Lior Weiss and his team in Kiryat Gat for OMG.
Posted by Doug Greener at Wednesday, February 27, 2019 2 comments: