Two really excellent beers have arrived in time to keep us warm on these winter days.  They're both rich in flavor and strong in alcohol – the two things we're looking for when the temperature drops.  Keeping warm is just a matter of using the right fuel.  Put your "light, crisp and refreshing" beers aside until at least April. 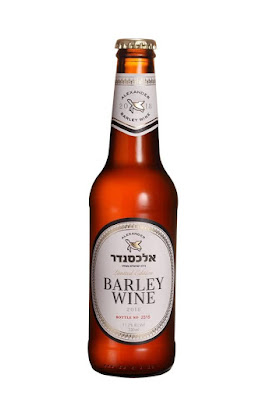 From the Alexander Brewery in Emek Hefer is Israel's first Barley Wine.

Born in England and adopted and adapted by U.S. breweries, the barley wine style of beer has an alcohol by volume (ABV) more commonly associated with wine than with beer (8-12%).  Also like wine, barley wines can be aged, with expected changes in the complexity of aromas and flavors.  Barley malt and alcohol are dominant in barley wines, with hops playing a distant third fiddle.  The American versions of barley wine, however, have stronger hop characters.

Alexander owner and brewmaster Ori Sagy said that the Israeli public is continuing to demand different beers of higher quality, and the decision to brew a barley wine "expands the boundaries of experience for Israeli beer lovers."

"In honor of our tenth anniversary, we decided the celebrate with barley wine, one of the oldest styles of beer that dates back to the fifteenth century in England, and is a kind of bridge between the world of beer and the world of wine.  We just brewed a limited edition of about 2,230 bottles and each bottle is numbered."

My bottle of Alexander Barley Wine was number 1469, and it poured a light copper color with a thin white halo of foam.  It dispersed a rainbow of aromas.  My drinking partner Moshe and I detected caramel, malt, alcohol and honey candy.  The first sip also brought a range of tastes as if they were all steeped in alcohol: caramel, toffee, vanilla and spice – finishing dry and bitter.  Alcohol by volume is a powerful 11.2%.

For Moshe, the tastes conjured up visions of "oatmeal with butter and brown sugar."

There is nothing skimpy or weak about Israel's first barley wine.  It's a great beer to sip on a cold day or night.  If you must have it with food, strong cheeses or rich, intense desserts are best.  It easily overpowers most main dishes. The 2019 edition of Jack's Winter Ale has also arrived in time for the cold.  The Shapiro Brewery in Beit Shemesh has been producing this seasonal beer every winter since 2012.  The recipe has been finessed here and there over the years, but the basics have remained the same: a strong (8.5% ABV) malt-forward ale, aged with oak chips steeped in Jack Daniel's Tennessee Whisky.  This is not a "holiday" or "Christmas" ale filled with festive spices.  All of the intense flavors come from the skillful blending of specialty malts, hops and yeast – and the whisky-imbued wood aging.

This season's pouring brought back memories of winters past.  A dark, reddish copper color, with aromas of sweet malt, caramel, vanilla and some whisky.  The mouthfeel is creamy, full-bodied ("chewy"), with rich, sweet tastes of alcohol, caramel toffee, cocoa and a little vanilla.  The tastes stay with you for a long and sweet finish.

As in year's past, I didn’t get any real taste of bourbon, or wood for that matter, but I must assume that those whisky-soaked chips added something to the flavor background.  However it works, it succeeds.

I just enjoyed a bottle of Jack's Winter Ale with a Shabbat meal of a hearty cholent, a thick stew of barley, beans and potatoes.  It would go swimmingly with any full and flavorful winter meal.

Jack's Winter Ale continues to be a winner year after year; something Israeli beer drinkers can look forward to as winter approaches.  I know I do.