The Israeli "Queen of Beer"

Not a week goes by without seeing an article or two on women brewers.  It may be North America, Europe or Asia, but the subject of women who make beer seems to captivate readers around the world.

Maybe it's because the industry has such a masculine image.  Say "brewer" and most people think of a burly dude, woolly bearded, tattoos covering both arms (and maybe more), unencumbered belly, hefting a beer keg on each shoulder.  I definitely know a few like that.

But historically, women have been the brewers of beer.  Beginning in ancient Egypt and Mesopotamia, beer was a family staple brewed in the kitchen the same as bread was baked in the kitchen.  As brewing became more industrialized to meet the growing demand, men began to be the workers in the breweries.

Then again, in medieval Europe, beer was brewed and sold by "alewives" or "brewsters," some of whom became quite famous and prosperous. Brewing once again moved into masculine hands due to economic pressures and the church's demonization of women brewers and the taverns which they ran.
The craft beer resurgence in the U.S. has helped restore some balance, with roughly a third of all brewery workers being women.  But here in Israel, women in the business are almost entirely invisible.

Meet Na'ama Ashkenazi, the self-styled "Queen of Beer" from Karkur, a woman who brews and sells craft beer commercially in Israel.

"I think it's pretty cool being a woman in a masculine business," she declares.  "What I can't do so easily is move around heavy stuff – like the cases of bottles, the sacks of malted grain and the brew kettles.  Okay, so I get help with this.  I'm currently contract brewing at the Sheeta Brewery in Arad, where the workers do all the heavy lifting.  When I brew at home, I use the mini-mash system, which is only five liters, maximum."

Is this the only problem you face as a woman in the industry? I ask.

"Yes," Ashkenazi answers.  "Men brewers have never treated me any differently because I am a woman."

Ashkenazi reminds me that there are other women in the craft beer industry in Israel who are working in administration, accounting, marketing, and teaching. 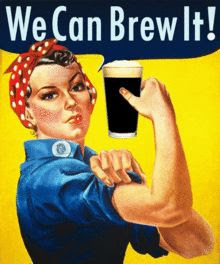 (In addition, there are at least three other women who are professional brewers in Israel.  Israel's two industrial breweries both have women brewmasters working for them: Anat Meir is the head brewer for Carlsberg, a mass-brewed lager from the Israel Beer Breweries Ltd. in Ashkelon.  And Marina Zeltzer is the chief beer technician for Tempo Beer Industries in Netanya.  Hadas Karmazin in Moshav Talmei Yaffe near Ashkelon, runs home-brewing courses, workshops and beer events, as well as a store for home-brewing equipment and supplies.  She brews her own beers under the Karmazina label for use at her events.)
Ashkenazi got into brewing without much planning aforethought, in short, like almost every other brewer I have ever spoken to!

"My husband saw an ad for a course in home-brewing and thought I would like it," she relates.  "That was in 2010.  He was (still is) a career army officer and we had two young daughters.

"Brewing opened up a whole new world for me.  I loved the first ale we made and I wanted to find out more."

Ashkenazi began attending lectures on beer, tasting session, brewpubs – anything to increase her knowledge of this captivating beverage.  At one of the tasting sessions, she thought, "I can do this much better.  I can make it multi-sensory with video presentations and sound."

She chose "Klara" as the brand name for her beer.  "It's a strong name and the name of my grandmother, who was a strong woman, one of the founders of Kibbutz Ma'abarot."

After a few more months of planning, Ashkenazi emerged as the "Beer Queen of Israel," ready to put herself on the map.

She started to organize and conduct beer tastings, workshops and lectures, home-brewing seminars, and special parties and events in workplaces and restaurants.

"I love to speak in front of people, to share my love of beer," she admits.  "The emphasis is always on entertainment.  I try to bring other Israeli craft beers into the tastings, not only mine, and also foreign beers.  For some events when I speak to tourists, I use only Israeli craft beers.  I go into the different styles, the ingredients, the brewing process, and even some background about the breweries themselves."

The big push came when she entered a home-brew competition and her beers won gold and silver medals – and Klara was crowned "the best small brewery in Israel."
"I was hooked then," she confesses.

Today, Ashkenazi's professional life revolves around craft beer, which she started brewing commercially in 2012.  After trying contract brewing in several locations, she now makes Klara beers at the Sheeta Brewery in Arad.

India Pale Ale – One of the few beers in Israel brewed with Sorachi Ace hops, originating in Japan and now grown in the U.S.  It has a very fruity aroma and flavor with citrus (lemon) and mango.  Made with Israeli tastes in mind ("We really don't like things too bitter," according to Ashkenazi), it has the lowest level of bitterness that can still be called an IPA.  Alcoholic level is 6%.

Stout – A dark and sweet beer with flavors of coffee and roasted malt.  4.5% alcohol.

Belgian Tripel – A classic style, brewed with Belgian yeast for its distinctive taste.  Sweet and strong (8% alcohol), it is not a widely brewed style in Israel.

A very welcome feature of Klara beers is their very informative labels.  In addition to a written explanation of the style, each label includes color-coded infographics which show the beer's bitterness, sweetness and color.  Wouldn’t it be great if all beers had this on their labels?

Much of the beer that Ashkenazi brews goes to her own events. 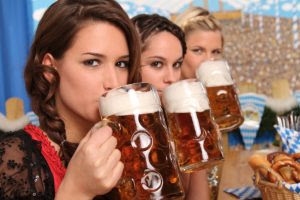 She adds: "I am very pleased to see that more and more women are attending these events.  This empowers women to reach their own decisions and speak their minds about craft beer."

"In order to sell my beer in more places, I need to have a distributor, but that would leave me without any profit," Ashkenazi reveals.  "So it seems most of my efforts will continue towards what I love doing – being Israel's Queen of Beer and introducing people to the fantastic experience of craft beer through my seminars and tastings."

[A similar version of this article appeared in
The Jerusalem Post Friday Magazine.]
Posted by Doug Greener at Saturday, January 12, 2019