Two beers "for the record" -- Gagarin and Freedom IPA

A few months ago I tasted two exciting beers, really quite extraordinary, which by now, alas, might be hard to find in stores.  The brewers say that these were one-off beers and will not be made again.  However, a few bottles are still around.

The first is Gagarin, a Russian-style Imperial Stout named after (who else?) Yuri Gagarin, the first Soviet cosmonaut.  It was made by the brewing team of Basha-Flom (Omer Basha and Dvir Flom) and contract brewed at the Sheeta Brewery in Arad.  About 400 bottles were made.

Gagarin is one of the most impressive Israeli beers ever brewed.  A true Imperial Stout such as was brewed in England for the Russian nobility back in the 18th century.  Apparently those Russians liked their beer powerful (high in alcohol), flavorful and nourishing.

Before I tell you what I think of the beer now, let me add that Omer Basha recommends that Gagarin is "intended for aging and will probably reach its peak in about a year or two."  Since I have an extra bottle, I will try to do that -- if I can resist drinking it sooner!

Without aging, Gagarin pours out an ultra-dark brown color with very little carbonation and a small halo of foam.  The alcohol by volume is a hefty 9.5%, and you sense this immediately in the aroma, along with toasted bread, coffee, chocolate, licorice and some carob.
The first thing you feel on your tongue is the pleasurable creaminess and moderate sweetness of this beer, which fades into a very bitter finish.  The taste of alcohol is also very strong, with malt, dried fruit, licorice, caramel and dark chocolate.  It seems that every mouthful brings on different flavors.  I can see where aging will mellow the strong alcohol taste and the bitter finish.

This full-bodied beer should be poured and sipped like a fine wine.  By no means should you drink it ice cold.  Very few foods have the intensity to pair with Gagarin.  However, desserts with rich chocolate flavor, cheesecake, and oozy or smelly cheeses would be scrumptious with any Imperial Stout.

The second disappearing beer is Freedom IPA from Oak & Ash, brewed at the Dancing Camel Brewery in Tel Aviv.

As much as Gagarin stands out among Israeli stouts, Freedom is a remarkable IPA.  Hopped with Citra and Simcoe, which impart fruity and piney esters (and some citrus), Freedom is also fortified with real mango and pineapple.  In fact, you can see the flecks of fruit floating in the beer.

A lovely cloudy and golden copper color, Freedom is blessed with rich aromas of fruit and a hint of citrus.  Since you know there's mango and pineapple inside, that's what your nose is looking for, and that's what you find.

The taste is an inspired combination of malt sweetness and piercing hop bitterness (100 International Bitterness Units), with flavors of fruit salad (mango, banana and other tropical fruits).  The huge 10% alcohol is not at all aggressive, and the finish is bitter and fruity.  You could describe Freedom as a Belgian strong ale with IPA hops.  Not too shabby a combination.
Posted by Doug Greener at Sunday, December 23, 2018 1 comment:

A few weeks ago, the sixth branch of the Beer Bazaar opened in the Jaffa Flea Market (7 Olei Zion Street), known in Hebrew as the Shuk Hapishpeshim.  At the invitation of the branch owner, Avi Moskowitz, photographer Mike Horton and I descended from Jerusalem to attend the opening.

We arrived early in the evening, but within an hour-and-a-half, the new pub+store was packed with beer-thirsty Tel Avivians eager for another place to enjoy their favorite beverage.  Of course it didn't hurt that the Beer Bazaar was offering free tastes of any of the 100+ Israeli craft beers lining their shelves.

These shelves, by the way, are dramatically backlit to put the bottles in the spotlight, as it were.  Circular indentations are cut into the shelves to hold each individual bottle.  "This is how we give respect to the beer," Avi explains.

In an adjacent small barroom, Yarden Rivlin, manager of the Beer Bazaar in Jerusalem's Machane Yehuda market, was giving continuous orientation sessions on beer styles, while participants were treated to free bottles of beer.

The menu for opening night was only hot dogs and French fries, but now the restaurant has the same kosher menu as the Beer Bazaar in Jerusalem.  It also has 20 taps for draft beers -- eight or so are the Beer Bazaar's own brand, made at their brewery in Kiryat Gat, while the others are from different craft brewers around the country.

Avi, who is also an owner of the Jerusalem Beer Bazaar, explains: "Even though this is the sixth Beer Bazaar branch, it is only the second one that is kosher.  The feedback from many people was that there was a need for a kosher restaurant in the Jaffa Flea Market."

Avi also said that the Flea Market is undergoing the same process of gentrification as Machane Yehuda: Stalls that were once full of antiques are now fancy restaurants and bars.  In fact, Mike and I took a walk around the area of the Beer Bazaar and saw a number of exclusive shops and restaurants, yet couldn't find a place to buy a simple pita bread with hummus!

"For the market to stay interesting, it has to change and adjust," says Avi.  "By introducing Israeli craft beer, we're not only supporting the local economy but also helping other businesses in the market.  In Machane Yehuda, for example, the produce stalls around Beer Bazaar stay open late and sell because of the increased traffic that the restaurants and bars bring."

The staff of the new Beer Bazaar were trained at the Machane Yehuda store, learning the background of beer and brewing in general, and Israeli craft beer in particular.  Avi calls this the "Beer Bazaar University," and every member of the staff has to graduate it.  "They are representing Israeli craft beer," Avi claims, "a very important assignment."

"Craft beer reflects what is going on in this country.  People are developing a greater appreciation for hand-crafted food, wine and beer.  They are demanding more and getting more.  And we are very proud that Beer Bazaar can be a part of that." 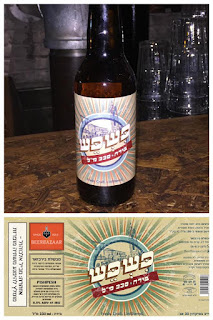 I left the Beer Bazaar with a bottle of the most recent addition to their own line of beers.  It's named Pishpesh, which in Hebrew means "flea," in honor of the new store's location.  It's a light ale (5.5% alcohol by volume), not completely pale but light amber.  It's brewed with four kinds of hops, but there are no distinguishing aromas, except perhaps a little hay.  The taste is a clean bitterness which balances the malt nicely but adds no real flavors.  I think its neutral bitter taste will pair well with a wide range of foods, for example, spicy and salty dishes, curries, pizza, aged cheeses, and sweet desserts.

Posted by Doug Greener at Sunday, December 16, 2018 No comments: