Six beers to try from Alexander, Six-Pack and HaDubim 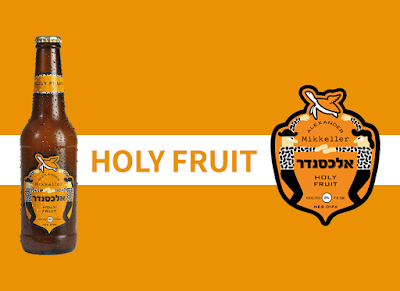 Yet another trend from the U.S. is a new beer style: New England IPA. Israel's entry into this field is Holy Fruit, brewed collaboratively by Alexander Brewery in Emek Hefer and Mikkeller in Denmark.

(Actually, Mikkeller is not a brick-and-mortar brewery at all. The owner, Mikkel Borg, makes collaborative beers with brewers all over the world. This is the second beer he's brewed in collaboration with Alexander.  Read about the first one, Milk & Honey, here.)

New England IPA is characterized by a very hazy to opaque color, massive fruit aroma and flavors from the hops (tropical fruits are favorites), juicy, creamy mouthfeel and low bitterness.

Since Holy Fruit calls itself a New England Double IPA, it can allow itself to be even more hopped than the regular style. If this sounds good to you, then Holy Fruit is a great beer.

Its color is a cloudy grey orange, and the aromas hit you as soon as it's poured: grapefruit, tropical fruit shake, mango and grass. You can't miss the peach in the taste, along with bitter citrus fruit, herbs and onion. The long bitter finish is very citrusy. Alcohol by volume is a hefty 8%.

Alexander and Mikkeller deserve our thanks for introducing New England IPA into Israel – and for doing it with such a delicious version. 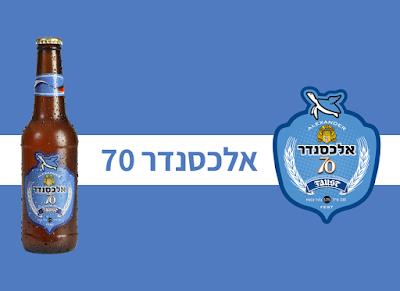 This is not the only collaborative beer that we got this summer from Alexander. Brewery owner Ori Sagy loves these joint ventures. At the same time that Holy Fruit was coming to market, he introduced 70, brewed in collaboration with the Faust Brewery in Miltenberg, Germany, to mark Israel's 70th anniversary. The idea was initiated and supported by the German Embassy in Israel.

70 is a German-style festbier, a lager style made popular by being served at the Munich Oktoberfest, the world's loudest and glitziest beer festival.

Festbiers are unapologetically malty, with very little hop flavors or bitterness. For this collaboration, says Ori Sagy, a basic German festbier was augmented with Israeli wheat, not a usual ingredient in this style of beer.

70 is a good, solid example of the festbier style, with no surprises. The color is mid-amber under a small head. The aroma is solidly malt with some banana and vanilla. A medium and smooth body and mild bitterness complete 70's simple yet stylish profile. Alcohol by volume is 5.7%.

Also new this summer on the Israeli scene is Six Pack Brewing, owned by Eyal Noam, a former barman and writer on alcoholic beverages.

Around three years ago, Noam came up with the idea to combine his love of beer and super hero comics. He began home-brewing with several friends and developed beer recipes and brands based on super heroes. More recently, he took the decision to go commercial by contract brewing at the Mosco Brewery on Moshav Zanuach.

"We are working now to expand our distribution to more stores and pubs," says Noam, "and to brew additional beer styles." Today, Six Pack has two beers on the market:

Ultimus is an amber ale, 5% alcohol by volume, which pours out a lovely copper amber color, semi-hazy.  The dominant aroma is fruity hops, specifically
pineapple, and yeast. In the taste, you get less citrus, but several sweet flavors – caramel and butterscotch candy – ending with a refreshing dry finish. Ultimus is well balanced between bitter and sweet, and is just fun to drink.


The second beer from Six Pack is named Heavy Hitter Strong Beer, a 7% alcohol "Belgian trippel."  Although roasty and sweet malt aromas were prevalent, and there was some malt in the taste (along with vegetables and caramel), I felt the malt presence wasn't strong enough for the Belgian trippel style.  The body was also quite thin.

What was powerful was the aroma and taste of the yeast. Like some other Belgian trippels, there was a lot of yeast waiting at the bottom of the bottle. You're allowed to gently roll the bottle and mix in this yeast. This will add bitterness to the beer, but since it is very sweet to begin with, that's not a bad thing.

And finally, two new beers have been launched by HaDubim ("The Bears), the brewing team of brothers Rotem and Dagan Bar Ilan. They use the facilities of the Beer Bazaar Brewery in Kiryat Gat. Rotem and Dagan brew some of the most interesting and sophisticated beers in Israel, and beer lovers eagerly await their new creations.

Introduced during the recent LGBT demonstration and parade is HaDubim's Love Ale, which began as a pilot project between a pale ale and an amber ale. "We express ourselves through making beer," Rotem told me. "That's how we talk. We wanted to make a statement in support of the LGBT community, so we dedicated this beer to them. We just made one batch. When it's gone, it's gone."

Love Ale, with its distinctive rainbow colored label, is still available in beer specialty shops and some liquor stores. It pours out a hazy red-amber color with a large white head and active carbonation. Take a sniff and you get citrus and pine from the Citra and Cascade hops, and some caramel and toasted malt. The first tastes are sweet fruit, mostly peach, citrus and caramel, but as you drink more, the bitterness increases. The second pour is much cloudier, and leads to a bitter, refreshing finish. Alcoholic strength is 5.5%. Leave politics and religion aside and just enjoy this tasty and satisfying beer.

Taking a walk on the much wilder side is HaDubim's Grizzly Double IPA (2018), a hop-bomb that assaults your nose and tongue with sensations from every direction. Clear yellow-gold in color, the grapefruit aroma is powerful enough to start your saliva flowing. There are also whiffs of tropical fruits and caramel. The tastes we conjured were bitter chocolate-covered grapefruit, toffee, juicy fruit, malt and some bazooka bubble gum. The mouthfeel is full and the finish is bitter and tasty.

Although the alcoholic content is 9%, you don't really feel it. And although the International Bitterness Units are measured at a whopping 100, the tastes are not overwhelmed by the bitterness. HaDubim has brewed at least three other versions of Grizzly IPA in the past, and this one maintains and even raises the standard of their excellence. It's not a beer for everybody, but if you are a fan of India Pale Ale, don't miss this one.


[A similar version of this article is appearing in
The Jerusalem Post Friday Magazine.]
Posted by Doug Greener at Thursday, October 11, 2018