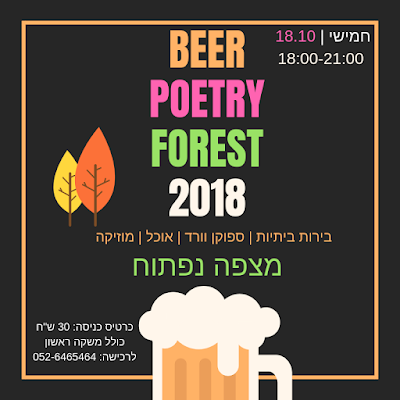 One of the wooded areas within Jerusalem, this one in the Ramot neighborhood, is threatened by
urban development.  Now, being against all building within the city is silly and hypocritical.  But we should expect the authorities to seek a balance between the needs of a growing city and the touches of nature within it.

Ramot for the Environment, a citizens' committee, an NGO, has been fighting to preserve a portion of the Ramot Forest known as Mitzpe Naftoach, which is full of beautiful plants and wildlife.  They hold events which bring people to the forest where they can appreciate and learn about its unique contribution to Jerusalem.

Someone on the committee had an idea, perhaps to attract a younger crowd, to include home-brewers and beer at the next event.  They asked the old blogger if he could help out -- and thus was born a planned evening of Home-Brewers and Poets on Thursday, October 18, beginning at 6:00 p.m. 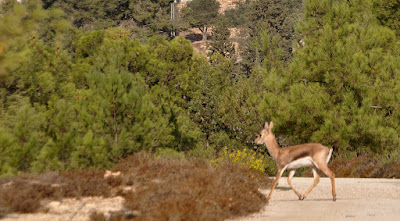 As the name says, alongside the beer there will be a poetry slam with the following witty wordsmiths (in Hebrew): Tchelet Zohar, Yael Chetz, Iftach Leibowitz and Ido Nitzan.  Food and music are also part of the program.

Entrance is 30 shekels and that includes your first cup (250 ml) of beer.  Additional beers are 10 shekels each.  All proceeds go towards promoting and preserving the Ramot Forest (Mitzpe Naftoach), home to over 1,000 plant species, Jerusalem's largest gazelle population and many other wild animals.

If you're coming by car, put
דרך החורש 90
in your WAZE apparatus.  Park your car when you get there and walk right in through Gan HaKipod.

If you're coming by bus, take line 31, 32 or 72 to Tzondek/Aliyat Hanoar.  Walk down to the nearest traffic circle and take a right turn on Even Shmuel Street. Walk to Maale Oranim Street and turn left.  Walk down the entire street, then take a right onto Derech HaChoresh until you reach a small shopping center on your right (90 Derech HaChoresh). Across the street, on your left, is a park called Gan HaKipod. Guides and signs will be waiting for you there!

The walk shouldn't take any longer than 10 minutes.  Here is a map which shows you the way:  https://goo.gl/maps/i577awVcSgC2

For further information, visit their Facebook page: Save the Jerusalem Forest, or call 052-646-5464.

So come out and have a good time while you're doing some good.  I'll be there to (try to) answer any questions about Israeli craft beer, to say hello and to join you in selfies.  Remember: This Thursday, October 18, starting at 6:00 p.m.
Posted by Doug Greener at Sunday, October 14, 2018