"Beer smells like a goat": Opus Brewing and Julian the Apostate

Shortly after the invisible Dr. Scott visited me (read about that episode here), another pilgrim came to Jerusalem to present me with his beer and his story.

He started home-brewing around five years ago because he loved good beer but found it expensive to buy in stores.  His answer: Make your own at home.  It's better than industrial beers, and costs a fraction of the price of craft beers.

Jason quickly got hooked on the whole "passion for brewing" thing.  So much so, that he left the administrative world of non-profit organizations to take a job as assistant brewer/cleaner/delivery guy at the Dancing Camel Brewery in Tel Aviv.

"Even then," he adds, "I knew that I would have my own brewery some day.  While I was working at the Camel, people asked me if I could tell them more about beer and help them start home-brewing.  So I began to organize brewing workshops in people's homes.  As the demand for these skyrocketed, I decided to leave my day job and do it full-time."

Jason now runs home-brew workshops, beer tastings and lectures, and other beer events wherever he can.  These are held in private homes, offices or public venues: Birthday parties, bachelor parties, office perks, anything.

Jason can organize his own parties when asked, but also works closely with Sipscene, which runs alcoholic-based events in the Tel Aviv area, and with organizations such as Nefesh B'Nefesh and Lone Soldiers.

He named his business Opus Brewing because that is the Latin word for "work."  "That's been my philosophy from the time I started home-brewing.  When you have a problem and you want to change things, put your head down and get to work."

The goat logo comes from a poem written by the Roman emperor Julian the Apostate (330-363).  Wine is the drink of the gods, he wrote, while beer smells like a goat.  I guess Julian never really had any good beer.  At any rate, Jason commemorated the emperor by naming his logo goat Julian.

The Sunset Amber Ale is a dark, semi-clear amber, very carbonated out of the bottle, with a huge long-lasting head.  I got aromas of pineapple, resin (also called "dank") and a little soap.  The taste is bitter fruit, maybe lemon, but then as it warms, some bread and strong alcohol.  I found this to be a refreshing beer, but I would have preferred the alcohol taste to be less aggressive.  This was strange since the beer is only 5.8% alcohol by volume.

With the Burn the Barn Farmhouse Ale, we returned to the dark amber color and high carbonation, but the aroma was brown sugar and, yes, farmhouse funk.  One of my drinking partners was less polite and compared the funk to "reflux," while another called it a "beautiful beer which waters your tongue," i.e., causes salivation.  At any rate, this beer delivers what a farmhouse ale should, and is a good example of the style.  Alcoholic content is a strong 8.4%.

The Opus Kölsch also brings this style of beer to the fore.  Originating in Cologne, Germany, in the early 20th century, Kölsch is a light, session (low alcoholic) ale which rivals lagers for balance and crispness.  In fact, traditional Kölsch beers were fermented at warm temperatures with ale yeast, yet lagered (matured) at cold temperatures.

Opus Kölsch pours out a golden amber color with a large frothy head that I called "explosive."  The aroma was similar to a wheat beer, with herbs, spice and aromatic hops.  The taste was of sweet spice, malt and subdued hops.  As we reached the bottom of the bottle, the beer became thicker with an opaque copper color, approaching the taste of a Belgian ale.  The finish was a little sweet and very refreshing.  Alcohol by volume is 5.4%, on the high side for a Kölsch, but just right for me.

Jason is a home-brewer, so his beers are only available at his own events (lectures, workshops, tastings).  In the longer term, however, he would like to sell his beers commercially and perhaps even open a neighborhood bar.  He has the talent, he has the determination and he certainly is not afraid of hard work.  So I suspect we'll be hearing more of Opus beer in the not-too-distant future.

[You can read more about Opus Brewing on their website here.]
Posted by Doug Greener at Sunday, September 23, 2018 No comments:

Just as there are trends in fashion, food, celebrity status and google searches, so are there trends in craft beer.  One such trend now in North America and Europe is getting back to the basics; brewing a beer to achieve a clean, unadulterated taste. 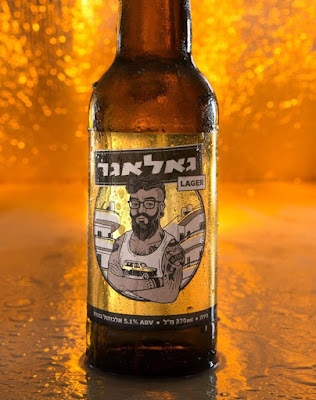 This trend has reached the Beer Bazaar Brewery in Kiryat Gat (also known as Mivshelet Ha'aretz).  They have brought out a basic lager beer named Gallagher.  Nice touch, that: the name contains the style.

To explain what makes a lager a lager while standing on one leg, let me say this.  Lagers are beers fermented at lower temperatures than ales, and lager yeasts tend to aggregate at the bottom of the tank, while ale yeasts prefer the surface of the liquid.  I have no idea how the little fungi know to do this.

Because of the different yeasts and the cooler fermentation temperatures, lagers are generally more mellowed out than ales.  They also tend to be crisp, smooth and light tasting.  Ales are more robust tasting, fruity, aromatic and bitter.  Almost all of the mass industrial beers brewed in the world today are lagers.  That's what most people like.  A crisp, cold brewski.  Color, aroma and taste are secondary.

The only thing Gallagher shares with these industrial giants is the name.  It's simply called a lager; no adjectives, no hyphens.  When we poured it from the bottle, it was a red amber color with almost no head, but with active carbonation.  It has a full malt aroma, but almost nothing from the hops.  The taste is what sets it apart from the industrial lagers.  There's caramel and peaches, or more generally, cooked summer fruit.  The finish is sweet and slightly fruity.

Gallagher is a very drinkable beer, meaning you can gulp it down to quench a mighty thirst.  The moderate 5.1% alcohol by volume won't stand in your way.

Light lagers pair well with bold and spicy dishes which they cool off (stir-fries, pizza and salsas, for example) as well as mild food which they do not overwhelm (such as fruit salads, light appetizers and grain dishes).

Another trend seeping into Israel from abroad is beer-grape or beer-wine hybrids.  Actually, since many early beers -- and I really mean ancient -- were flavored with grapes, this is not such a modern idea.

It made its comeback in the U.S. during the last five years or so.  Craft brewers began experimenting with adding grape juice (sometimes including the grape must: skin, pits and stems) to the fermentation stage.  Obviously, the grape juice begins fermenting into wine as the wort (pre-beer liquid made from malted grain) ferments into beer.  The result is a true hybrid, combining taste characteristics of wine and beer.  And, to tell the truth, they go well together, as our ancient ancestors also knew.  Winemakers, too, have gotten caught up in the trend and are adding hops to their wine.  Are the resulting drinks wine that tastes like beer, or beer that tastes like wine?  Does it really matter?

Another phenomenon in America has been the ability of this beer-wine to reach across the aisle, as it were.  Bottles of it are appearing in wine stores and giving condescending wine drinkers a chance to try craft beer.

Israel's entry into this style is from the Sheeta Brewery in Arad, run by the husband and wife team of Jean and Neta Torgovitsky.  They call this their Special Edition Beer, made with grapes from the Midbar Winery in the Negev.

As you would guess, beer-wine hybrids are strong beers, and this one is no exception, at 8% alcohol by volume.  The beer's appearance is a cloudy dark amber.  The aroma is redolent with malt, yeast, caramel and raisins -- hinting at the fulsomeness to come.  The taste is sweet with caramel, dried fruit and alcohol, reminiscent of a fruit liqueur or grandma's thick home-made wine.  [They're talking about someone else's grandma, not mine.]  The full body fills your mouth with bitter-sweet spice.

Sheeta Special Edition is so strong and flavorful that only the most spicy and pungent foods can stand up to it.  It would go well with ratatouille vegetable stew, hot curries, goat cheese and even strong cream cheeses.

Sheeta Special Edition is the kind of strong, heavy beer best enjoyed during the colder months.  There might be a few more bottles still available now on the shelves of beer specialty stores and bottle shops, but brewer Jean Torgovitzky told me that he plans to brew another batch which will be ready for shipment in the fall.  Look for it.  In Israel, it's sui generis.
Posted by Doug Greener at Monday, September 17, 2018 2 comments: