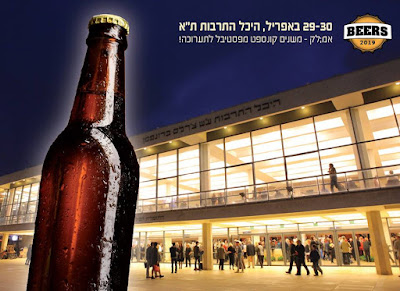 The organizers of the BEERS Exhibition, the Ben Ami Agency, have announced that it will take place April 29-30, 2019, in the Heichal Tarbut (Charles Bronfman Auditorium) in Tel Aviv.  As I reported to you here, this year's BEERS festival, originally scheduled for August 7-9, 2018, was canceled.

In their announcement, the Ben Ami Agency first praised beer festivals for the enjoyment they bring to so many people and for their importance in building a beer culture in Israel.  However, the announcement continued, this decision by the organizers to hold an "exhibition" instead of a "festival" will take it to a "much higher place."  The event will "meet the professional needs of the restaurant and bar industry in Israel (before the start of the 2019 beer season), along with a very high level beer experience for the general public."  More information will be provided as it becomes available.

From the comments I have seen on social media, opinions seem pretty evenly divided between those who welcome the change to an indoor exhibition in the spring, and those who would prefer the enjoyment of an outdoor festival in the summer.
Posted by Doug Greener at Sunday, August 05, 2018