What's brewing in the Galilee?

From where I sit in Jerusalem, beer news from other parts of the country are but faint echoes.  It's easy to ignore them, but then I miss out on some of the best stories.

For example, word reached me about changes in the Meadan Brewery in Carmiel in the central Galilee: a new owner is now producing a new brand of beers there that are not Meadan's traditional gluten-free, kosher-for-Passover beers.  [See background on Meadan's beers here and here.]

Clearly, it was time for me to get off my perch and get up to the Galilee.

With Mike Horton at my side for capturing digital images, I rode due north to Carmiel, now a bustling town in the Galilee mountains, founded a little more than 50 years ago.  Bryan Meadan chose Carmiel for his brewery partly because it's near his home in Har Halutz.

"We're located in a hi-tech building that has a brewery," Meadan joked as he greeted us.

Meadan shook up the Jewish world two years ago when he introduced kosher-for-Passover beer, long thought to be an oxymoron.  The gluten-free beer that Meadan was brewing for celiac patients (himself included) was also able to be certified as kosher-for-Passover.  It's brewed without any malted grain, relying on date syrup (silan) and brown sugar to supply the fermentable sugars.

For this last Passover, Meadan brewed about 40,000 bottles which were sold in Israel and exported to California.  Sales were also made via the Liquorama website.

"This was quite a bit less than last year," explains Meadan.  "We had issues with the distribution.  Things should be much better next year."

Amber Date Ale – Similar to the Special Date, but less hop bitterness and more fruity.  It's moving closer to what you would expect from a cider.

Some gluten-free beers use an enzyme which destroys the gluten in the malted grain.  Meadan has refused to use this method since he spurns the overuse of chemicals.  However, this means that he has chosen to forego on the malt aromas and flavors which many associate with beer.

Several months ago, Meadan sold a major share of his brewery to an entrepreneur who has begun brewing regular (read "gluten-full") beers under the brand name of Hagibor ("The Hero").

These beers will soon be available to the public, primarily in bars and restaurants in the north of the country.  But while I was in the brewery, I had a chance to taste them direct from the fermentation tanks – and I liked what I tasted.

These beers are being brewed by Meadan himself.  However, since he is a celiac, he is in the unenviable position of being able to smell the fruits of his labor, but not to taste them.  I compare this to the aging Beethoven, who was not able to hear his divine symphonies.

Nevertheless, Meadan was very enthusiastic about offering Mike and me tastes of the new Hagibor beers.

The India Pale Ale (7.2% alcohol) was exceptionally smooth, full of fruit esters from the hops, but not overly bitter.

The Wheat Ale (5.2%) is in the German hefeweizen style, with aromas of cloves and flowers.

For the Brown Ale (5.5%), I would have liked stronger nutty flavors and a body approaching that of a stout.  But it had a nice malty taste, a little tart and thirst quenching.

The Stout, at 5.6% alcohol, shared the same smoothness of the other Hagibor beers.  It was strong and flavorful, with more coffee taste than chocolate.

The Blond Ale was the lightest of the lot with 4.2% alcohol, light bitterness and flavors of malt and yeast.

After we had this tasty and very diverse assortment of beers, Meadan led us over to another fermentation tank where he tapped some pale, quiescent liquid – mead. 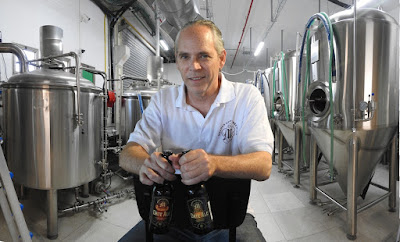 "We made this just with water and honey from Kibbutz Ayelet Hashachar.  It's an experimental batch and I'm not sure what we'll do with it."

It was dry, bitter and potent (7% alcohol), and even though mead is growing in popularity worldwide, I wonder if Israeli tastes are ready for this medieval super-drink.

From what I tasted of the Hagibor beers, I'm looking forward to their introduction, and I hope the brewery finds a way to reach country-wide distribution.

Meadan graciously invited Mike and me to spend the night at his home in Har Halutz.  In the morning, we continued north to Tefen and the new Malka Brewery, opened just a few months ago.

Partner and brewer Assaf Lavi greeted us and showed us around the still sparkling 2,000 square meter facility.

"We are now the largest Israeli craft brewer," said Lavi matter-of-factly.  "We are currently producing 70,000 liters of beer a month.  I wouldn't have even dreamed of this just a couple of years ago."

The brewery also produces Negev Beer (which for several years has not been brewed in the Negev!).  Both brands are partially owned by the Hacarem Spirits Ltd., one of Israel's leading importers and distributors of alcoholic beverages.
The Malka facility is certainly the most modern and automated craft brewery I have seen in Israel.  We joined Lavi for a tour of several of the rooms.

The huge storage room for malted grain includes a mill which can handle a one-ton sack at a time, with conveying tubes to send the milled malt directly to the mash tun.

A room for the mash tuns, kettles and fermenters with the capacity to brew four batches of 4,000 liters a day – a total of 16,000 liters.

A packing material room for bottles, kegs and cases.

A refrigerator room for storing hops and dry yeast.

A machine room which includes:

A nitrogen separator which extracts nitrogen from the air, which is used to propel the beer and other material through the pipes.  Normally, carbon dioxide is used, but carbon dioxide has to be purchased.

A recycling machine for steam and condensate.

A water purifier operated by reverse osmosis.  "The local water is high in calcium," explains Lavi.  "The purifier enables us to achieve the same quality of water we had on Kibbutz Yechiam when we brewed there."

Another piece of equipment was stationed among the fermenters.  "That's out 'hop gun,'" Lavi pointed out.  "It's used mostly for dry hopping.  Instead of putting hops into the fermenters with the beer, the beer is circulated through the hops in the hop gun.  It's much more efficient and gives stronger flavors."

The hop gun also has another purpose.  One of the Negev beers is an oak-aged porter.  Until now, oak chips were added to the beer during fermentation to give it the distinctive "wood-aged" flavor.  "Now, we put the oak chips in the hop gun and circulate the beer through it," says Lavi.

I tasted the Negev Oak Porter ("Porter Alon") that was made this way, and I was able to clearly distinguish for the first time, the oak and wood notes in this beer.  For me, a delightful discovery.

After the tour, Lavi explained Malka's rise from home-brewery to Israel's biggest craft brewery, in 12 years.

Assaf and his brother Dan began brewing in 2006 while they were owners of two bars in Tel Aviv.  They named their beer Malka (which means "queen" in Hebrew) because it's a feminine word, as is beer in Hebrew, projects royalty, and is connected to Israel's history.

They entered the beer in a competition and, although it didn’t win any prizes, the public loved it.  That was enough for Assaf and Dan, and they decided that brewing was what they wanted to do.

The first Malka Brewery was on Kibbutz Yechiam in Israel's northwest corner near the Lebanese border.  The excellent water was drawn from a well right under the brewery.  The brewpub and restaurant they opened adjacent to the brewery quickly became a popular weekend rendezvous.  [Read a description of the brewpub here.]

Still, the Lavi brothers were aiming higher.  With investment from their shareholders, they were able to open their new brewery in Tefen.

Today, the brewery produces four core beers, much as it did since the first brewery was opened.

The best seller has always been Malka Blond, a 6.5% ABV Belgian-style blond ale, rich in citrus and other fruit flavors.  Cascade hops are used, and orange peels and coriander seeds are added to the malt before boiling.  The result is a hazy, pale amber beer, with aromas of citrus, malt and spice.  The taste is also citrusy and tart, though not very bitter.

Malka Pale Ale (called in Hebrew "Admonit") is a reddish amber British-style pale ale (5.5% alcohol), brewed with coriander seeds.  The aromas I picked up were caramel and tropical fruits, with the flavors of caramel and grapefruit.  The finish is dry and bitter; for me just right.
Though I'm not a big fan of stout beers, the Malka Stout is one of my favorites.  It placed well in our Israel Brews and Views Stout Tasting Panel.  This is an Irish-style stout at 6% alcohol.  Roasty, with light bitterness, and flavors of bitter chocolate and coffee. 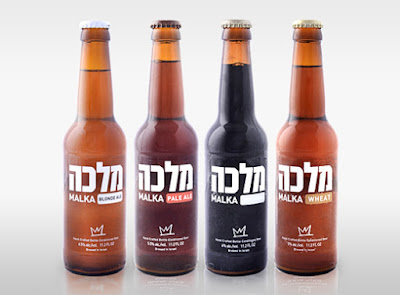 Malka's newest beer is Hindi, an India Pale Ale, 6.2% alcohol.  Hindi is a good "introduction level" IPA, suitable for Israeli tastes, not shockingly bitter like so many American IPAs, but with flavors of citrusy hops and caramel, balanced by the malt.
"You may have noticed that our fifth beer, a Wheat Ale, hasn't been on sale for more than a year," Assaf reminds me.  "We stopped making it because it was just another German-style hefeweizen, the kind that almost every other brewery in Israel is making.  We are now developing a new 'Israeli wheat beer,' better attuned to our local market.  It should be on the shelves pretty soon."

Over the next several months, the Malka Brewery will concentrate on "stabilizing" the production and sale of these beers in Israel.  But Assaf and Dan are already looking at further horizons.  For a brief time a few years ago, Malka Beer was exported to the U.S.  "We would like to restart sales to the American market," adds Assaf, "and we are also looking at a few European contacts that have shown interest.  In addition, we are now running a pilot project in Russia through a local distributor."

Through private initiative and hard work, the Malka Brewery and the Meadan-Hagibor project are changing the definition of Israeli craft beer.  Modernization, innovation and quality: That's what's brewing in the Galilee.

[A similar version of this article appeared in The Jerusalem Post Magazine.]
Posted by Doug Greener at Monday, July 09, 2018