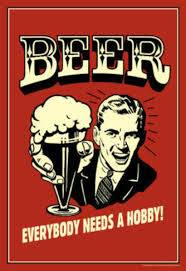 Well, to tell the truth, he does have a son living in Israel and has lots of other things to do while he visits here.  But he did take the trouble to meet with me and share his beers.

"Since then, my philosophy has been to make interesting, somewhat unusual beers that you can't find in the store," Dr. Scott continues.  "This has included a lime zest/candied ginger wit, an orange blossom water infused Pilsner, and about six more recipes.  We've won a few awards in local American Homebrewers Association sanctioned competitions but have never gotten past the first round in the U.S. National Homebrew Competition, although some of my beers have received scores in the mid 30's out of a possible 50." 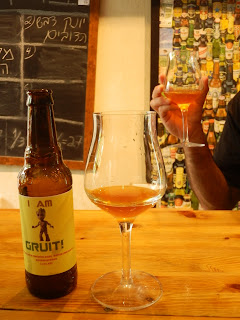 I met Dr. Scott at Beerateinu, the Jerusalem Beer Center, where we were joined by partner Shmuel (Schmulz) Naky, himself a talented practitioner of the fermenting arts.

The first beer we tasted was I Am Gruit, Dr. Scott's excursion to pre-hop days when people flavored and bittered beer with almost anything that grew out of the ground -- fruits, herbs, mosses, weeds, roots, leaves, flowers, fungus and barks.  The mix of this vegetation was called "gruit," and it was gradually replaced by hops across Europe by the 14th and 15th centuries.  Gruit varied in different locations, of course, but some common ingredients included sweet gale, mugwort, yarrow, ground ivy, horehound, Calluna heather, juniper berries, ginger, caraway seed, aniseed, nutmeg and cinnamon.  Sounds delicious.

I Am Gruit contains cinchona bark, kaffir lime leaves and juniper berries for the flavoring, along with wheat and rye malt, and honey.  The lime leaves are enough to give the beer a powerful sour citrus flavor.  Alcohol by volume is 5.64 %.  I found it very refreshing, but after 60+ years of beer drinking, I'm a little hooked on hops.  It was interesting to go back in time, but in the case of beer, I prefer the present. 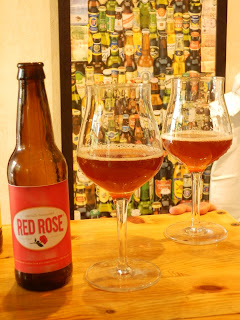 The second beer, Red Rose, is a Flanders red ale, a barrel-aged sour beer, with the addition of rose hips.  Dr. Scott uses five different kinds of malt (Munich, Vienna, Caramel, Pilsner and Carapils) plus flaked wheat in the mash; Glacier hops are used to give aroma.  (Dr. Scott grows his own Glacier and Centennial hops in his garden.)

"After fermentation, the beer is aged for five months in an oak barrel that held a previous sour beer," says Dr. Scott.  "Then I put rose hips into the barrel five days before kegging and carbonation."

The result is a reddish amber beer, acidic but not extremely so, with no hop bitterness that I could detect.  There were underlying flavors of raisins and sour citrus.

The last beer we shared was Peat MacHeather, a Scotch Wee Heavy style ale.  The malt is smoked with peat, like a Scotch whisky, and heather honey is added to the fermentation.  Peat MacHeather is strong (9.8% ABV), very dark amber colored and smoky, with additional aromas of sweet malt and caramel. 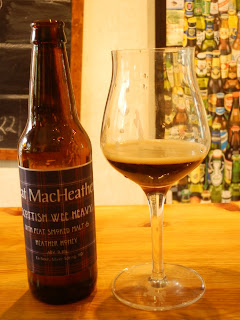 Chocolate and alcohol are the dominant tastes.  In this case, without any hop presence, the alcohol provides a nice balance to the big malt character.  I enjoyed tasting this beer in dainty sips (since we shared the bottle three ways).  It's not a beer for chugging down on a hot day.

Sharing these unfamiliar beers with Dr. Scott was a very pleasant and original diversion from my regular "job" of drinking mostly mainline Israeli craft beers.

However, Dr. Scott's beers, as well as he himself, are on their way to becoming Israeli.  He's making aliyah (immigrating to Israel) quite soon and of course will continue to home-brew here, "using uniquely Israeli ingredients to make new beers."

That's good news for everybody, especially me.  I'll get to taste a lot more of Dr. Scott's brews, and he won't have to bring them all the way from America for me.
Posted by Doug Greener at Sunday, July 22, 2018