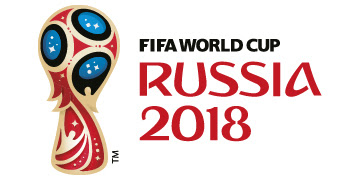 If you live in the U.S., you may not be aware that there is now a world soccer championship being played out in Russia.  However, for everyone else on the globe, this is the most exciting event that's happening now.  Hundreds of millions of usually sane individuals are losing their minds over these games, also known as the Mondial.

Alas, Israel (again) didn't make to the final playoffs, but the fever is also here as Israelis choose another favorite team, watch the games on TV, drink beer and cheer through the night.

Two Israeli craft breweries have chosen to commemorate this once-in-four-years event by introducing themed beers for the Mondiale.  They were both brewed in "limited editions" for the period of the games, and I understand they may be sold out even before we have a world champion.

The first is from Jem's Beer Factory in Petach Tikva.  Brewery partner Jeremy Welfeld rarely misses a PR opportunity for his fine beers.  In this case, he has brewed a pale ale named Mondi-Ale.  Unfortunately (and I mean this very seriously), it is only being sold on tap at the Jem's brewpubs and restaurants, and a few other locations, none of them in Jerusalem.

So even though I haven't tasted Mondi-Ale, I understand that it's a pale ale with a citrus hops aroma.  Jeremy adds that it's perfect for watching the soccer games on television during our Israeli summer.  Since it's a light 5% alcohol, you can knock down a few glasses while you're keeping your eye on the ball. 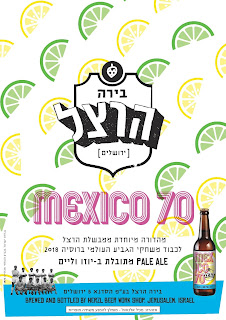 The second topical beer is Mexico 70 from the Herzl Brewery in Jerusalem.  Soccer fans know that the 1970 Mondial was hosted by Mexico, and that was the first (and only) time that Israel participated!  Still, I guess we like to be reminded of those glory days, and Herzl owner Maor Helfman is only too happy to accommodate us.

In fact, he brewed a first version of Mexico 70 in 2014, during the Mondial in Brazil, when it was a wheat beer made with mango and chipotle peppers (smoke-dried jalapeño).

Today's Mexico 70 is very different.  It's a pale ale, 6% alcohol by volume, brewed with lime and yuzu zest.

(Yuzu is a sour Japanese citrus fruit with an aroma and flavor somewhere between grapefruit and lime.  It's not eaten straight, but used as a souring ingredient in cooking and, it now seems, in brewing.)

Maor explains that Mexico 70 lets Herzl brewers play around a bit with different ingredients.  In fact, Herzl has also brewed beers which contained cocoa and vanilla and even Cuban tobacco leaves.

Mexico 70 is a cloudy, mid-amber color.  The aroma is lime and undifferentiated citrus.  Since I don't know what yuzu smells and tastes like, I can't tell if it was there, but the citrus fragrance was high value.  In the taste, too, lime was very dominant, with lemon in the background.  Yet there was little sourness.  In fact, the aftertaste ended on a sweet note.  The beer was super refreshing.  I can see it fitting right in while you're watching a Mondial game.

Even if you're an American in Israel and somehow ignoring the soccer madness, you can still enjoy Mexico 70, especially as the weather begins to heat up.
Posted by Doug Greener at Friday, June 22, 2018