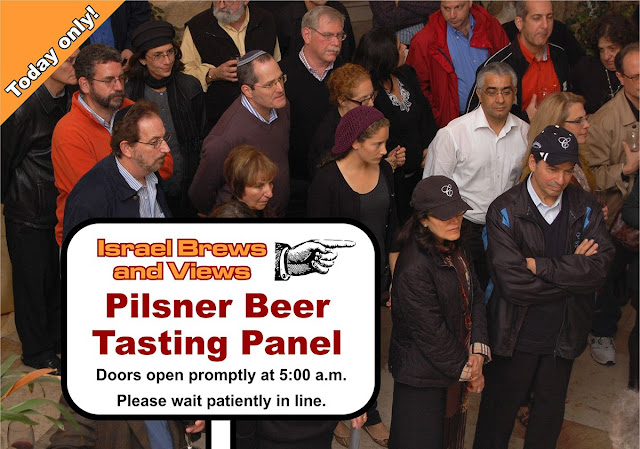 When I was much younger, growing up in America, one of the major beer brands advertised itself as the "King of Beers."  Maybe it was; maybe it wasn't.  But if any style deserves that title, it's Pilsner. 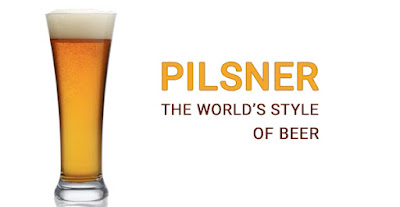 Born in central Europe in a burst of clarity, bitterness and flavor, Pilsner beer spread throughout the continent and the new world as the international standard for what beer should be.  Today, when the vast, vast majority of beer drinkers think of "beer," they are thinking of light lager, and they are thinking of Pilsner.  Worldwide, two-thirds of all beer is brewed in the "Pilsner tradition."

I'm not surprised that when the craft beer revolution took hold in America, Europe, Israel and other countries, it was in many ways, anti-Pilsner.  After all, this was the style (or at least what they called the style) of the industrial lagers which had come to be bland, fizzy, and rather odorless and tasteless concoctions.  Craft brewers, on the other hand, opted for distinction in colors, aromas and tastes, carbonation, body, bitterness levels and memorable finishes.

Among craft brewers, Pilsner lagers were largely ignored, eclipsed by stouts and porters, strong, tasty Belgians, and ales of all colors and tastes -- not to mention beers with additives of fruit, spices, herbs and what not.

But the simple, bright and crisp Pilsner was waiting in the background; waiting for all the hop-bombs and malt-bombs and fruity-bombs to run their course; waiting for the craft brewers to redeem the Pilsner name from the industrial brewers. 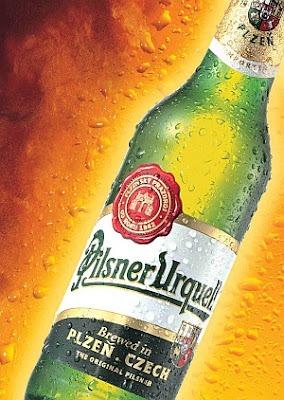 Today, almost every craft brewer in the U.S. and Europe makes a Pilsner or two, and the original Pilsner Urquell brand in the original city of Pilzn is growing in popularity.  Micro-brewed Pilsners are the fastest growing segment among all U.S. craft beers, with sales basically tripling between 2013 and 2016.

In Israel, six commercial craft breweries make a Pilsner.  Since one of them (Sheeta Brewery in Arad) brews it as a seasonal beer made only for the summer, it was not available when the Israel Brews and Views Tasting Panel gathered together in solemn assembly.  So we could only taste five.  They all are commercial brews, largely available in bottle shops and beer specialty stores throughout the country.

Our panel this time had ten tasters, believing as we do that the more tasters, the more truly representative are the results.  Our tasters were men and women, young and old, urban and rural, sabras and immigrants, beer geeks and beer guzzlers.  Although some of us possess beer judging credentials, our panel does not pretend to act as a professional body.  I believe, however, we do encapsulate the tastes of the wider Israeli public. 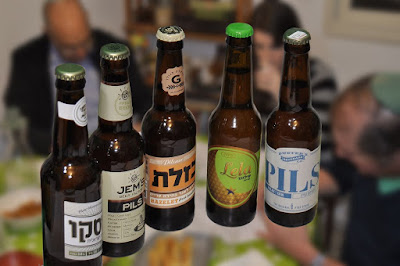 We tasted our five Pilsners completely blind.  All glasses just had a number on them, corresponding to a beer which only the servers knew.  The tasters recorded their impressions on a specially prepared page and when they were finished, gave each beer a ranking.  The best beer received five points, number two got four points, and so on.  All the points given to each beer were counted to obtain the final rankings.

In some of our previous Tasting Panels, the results have not been close, with clear winners and clear losers.  This time, the top scoring beer was only two points ahead of the two tied for second place, something I would call a "statistical dead heat," or what pollsters might term, "within the margin of error."  The fourth and fifth places were more clearly defined.

Something else of interest:  For the top three beers, we were basically all on the same page.  They got all the "five point" scores -- in almost equal amounts.  The other scores, however, were pretty much spread out among all five contestants, showing that the tasters were not exactly unanimous on everything.

Because the top scorings were so close, we decided this time to do something different.  Instead of giving individual rankings, we divided the results up into two groups: three beers in the upper group and two beers in the lower group.

Here, then, are the results with relevant comments from the tasters:

Buster's Pils -- From Buster's Beverage Co. in Beit Shemesh, brewed at the Alexander Brewery in Emek Hefer.  4.8% alcohol by volume.


Jem's Pils --  From the Jem's Beer Factory in Petach Tikva, 5% ABV.  One of the tasters mentioned that Jem's Pils had surprisingly strong esters and phenols in its aroma and taste -- characteristics more commonly found in ales than in lagers.

Bazelet Pilsner -- From the Golan Brewery in Katzrin on the Golan Heights.  4.9% ABV.

Gentle Pilsner --  From the Lela Brewery in Maccabim (brewed commercially at the Mosco Brewery).  Brewer Eli Bechar calls this a "Gentle" Pilsner, making it an even lighter version of a light beer.  3.8% ABV.

So there you have it.  The tasters have spoken.  Congratulations to Buster's Beverage Co., the Golan Brewery and Jem's Beer Factory, whose Pilsners were close enough to be considered a three-way tie.

And special thanks to Taster Mike Horton, photographer and graphic designer extraordinaire, whose magic camera returned the Esteemed Tasters to the picturesque city of Pilzn, where it all began. 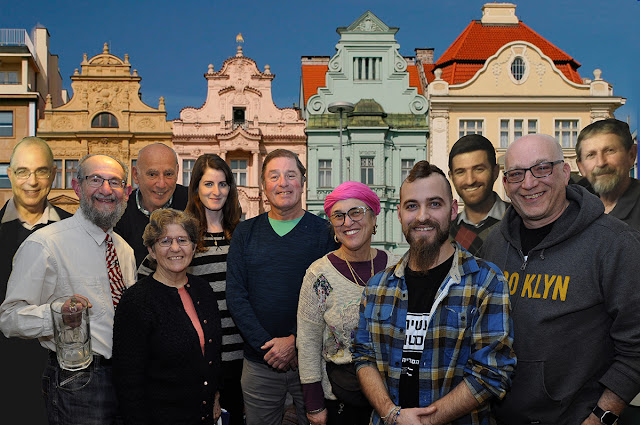