Drinks you need for Passover this year

If you're one of the many who thinks alcohol adds to a festive occasion, like for example a Passover Seder, you have a few options this year other than the same old, same old wine or liquor.  All are certified kosher for Passover. 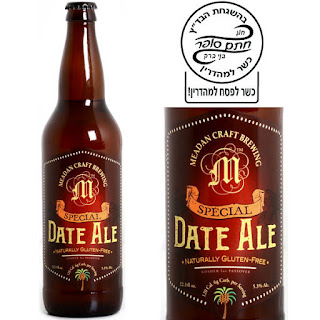 Back for the second year in a row is gluten-free, kosher for Passover beer from the Meadan Brewery in Carmiel.  There are two varieties, each brewed from date syrup (silan) with the addition of brown sugar and hops.

The Special Date Ale is 5.3% alcohol by volume, with a clear, dark amber color.  It has a fruity aroma with a very bitter taste, a touch of tartness (sour) and a dry finish.  Think of it as the "IPA" of non-grain beers.

The Amber Date Ale is also 5.3% and less bitter than the Special; the taste includes floral notes and dried fruits.

Brewery owner Bryan Meadan said that his ales are available in beer specialty stores and major liquor stores in Israel.  I had no trouble finding them in Jerusalem.  Bryan also exported a container of 22-ounce bottles to California, where they are available in several cities in the state (more details here.).  In the U.S., you can order them online from the Liquorama site (http://www.liquorama.net/israel-1/).

I have written earlier about my difficulty in accepting Meadan gluten-free, kosher for Passover ale as "beer" (please see here).  Many define beer as a grain-based alcoholic beverage, and without the grain a necessary component is missing.  In addition, almost all beers play the bitterness of the hops against the sweetness of the malted grain, thereby achieving a balance or a purposeful slant in one direction.  This is what makes beer brewing so challenging.

However, since I wrote that, I have tasted sour or "wild" beers, fruited and herbal beers, hopless beers, beers+wine, and beers+whisky.  All of them taste very different from the beers we grew up with.  So why not include maltless beers in the mix.

Whatever you call them, Meadan ales are tasty, refreshing beverages that will add diversity to your Seder table, during Passover, and throughout the whole year.

Avi told me that after Gingit is fermented and pasteurized, more sugar is added to sweeten the final product.  Avi suggests drinking Gingit straight with ice, but also using it as a base for mixed drinks.  "It's great with gin, spiced rum, tequila and vodka," he adds, "and it pairs well with any spicy food, for example, curries or stir-fries."

Gingit packs a powerful punch of ginger flavor on your tongue and ginger heat in your throat on the way down.  It's dry, sparkling and refreshing.  The added sugar doesn't make it sweet, just brings a bit of balance to the ginger sharpness and sour lemon.  I loved it, and I'm not a big fan of Canada Dry Ginger Ale (like my mother is).

You can buy Gingit in beer and liquor stores in Tel Aviv, Jerusalem and Gush Etzion.  (More information about Gingit here,)

Also back again this year are the delicious apple ciders and hard lemonades from Buster's Brewing Co.  There is Sweet Cider (4.8% alcohol), Dry Cider (6.7%) and Spiced Cider (4.8%).  The Hard Lemonade comes either regular or with added cranberry juice.  Both are 5% alcohol.  (Visit the Buster's website in English here.)

With these Israeli brewed treats, the holiday of Passover, the bane of Jewish beer lovers for generations, will be much less fearsome this year.