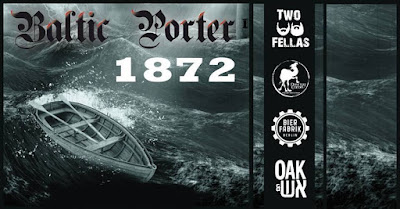 As 2017 ended, I went to the Dancing Camel Brewery in Tel Aviv for the first pouring of the 1872 Baltic Porter, an Israeli-German collaboration beer.

The beer had not two, but four collaborators: Dancing Camel and Oak & Ash in Tel Aviv, and Bierfabrik and Two Fellas in Berlin.

David Cohen, owner of Dancing Camel, has already brewed several beers in collaboration with German craft breweries.  "Why do we love collaboration beers?" he asks.  "Because beer holds no agenda, no political affinity, no religion and no cause more sacred than the freedom of the human spirit."  Who am I to disagree?

David explained that each of the brewers contributed something to the concept and recipe of 1872.  The German breweries suggested a Baltic porter, since northern Germany was one of the places where this style originated some 200 years ago, as well as the basic grain bill using German malt.

"The Dancing Camel brought up the idea of adding Israeli date honey -- silan -- and Oak & Ash was called upon to age the beer with oak," says David.  "The beer was brewed simultaneously in Tel Aviv and Berlin, and each brewery had leeway to choose the malts and hops.  The use of the date honey and the oak aging was required by all."

The name of the beer commemorates the tragic storm and flood of November 13, 1872, which devastated much of the Baltic Sea coast from Denmark to the German-Polish border.

The Baltic porter style developed when the British began exporting their popular porter beer to the Baltic countries (Estonia, Latvia and Lithuania) and also Sweden, Denmark, Poland, Finland, Russia and northern Germany.  These countries began brewing it for themselves, but according to their own tastes.  For example, they fermented it at lower temperatures with lager yeast, rather than ale yeast.  This tends to mellow out the flavors.

Baltic porter was also somewhat heavier and stronger than its British progenitor. David adds: "Our 1872 is 8% alcohol by volume, just right for this style.  Also, Baltic porters are usually not oak aged, as ours is.  This adds a touch of oak taste and smoothness to the final beer."

Background explanations are nice, but it was time to taste 1872 for ourselves.  I had some on tap at the Dancing Camel pub with Israel Brews and Views Taster Yitzchak Miskin, and back at home from a bottle with Taster Moshe Lifshitz.

1872 is a clear, dark reddish-brown beverage with healthy carbonation.  With the first whiff, you would not be delusional if a Belgian dubbel came to mind: aromas of caramel, roasted malt, licorice and chocolate.  The body is full and thick, with flavors of caramel malt, a little smoke, date honey, dark fruits and vanilla.  The overall impression is sweet and mild to the palate, fading into a bitter finish.  The high alcoholic content stays in the background.

All of us agreed: This is a complex, flavorful and warming beer, especially suitable for the winter months.  It's excellent as a sipping beer on its own, or pair it with strong tasting foods such as chilies and stews, sweet potatoes, odorous cheeses like Camembert, Gouda and brie, and any chocolate desert, cheesecake or apple pie.

Alone among Israeli brewers, David Cohen started around three years ago to build bilateral relationships with German craft brewers.  He has been very successful.  Since then, the Dancing Camel has participated in several German-Israeli collaboration beers, including Happy Hour in Sodom, Two Cats on a Camel, Gates of Helles, and now 1872.  Dancing Camel beers are sold in pubs and stores in Berlin and other cities, and its Leche del Diablo chili pepper wheat beer and Doc's Green Leaf Party IPA  are brewed under license and sold in Germany.  David opened a Facebook page for his activities in Germany called Dancing Camel Deutschland.  (Read more about Dancing Camel and these collaboration beers here.)

David explains that the initial impetus for cooperating with German breweries came from the Israeli Consul General in Munich.  David pursued it with visits to Berlin and other cities and admits struggling with "the ghosts of the past" when in Germany.  However, his contact with the German brewers led first to ties of professional appreciation, and then to feelings of friendship.  "One thing organically led to another," he says,"and today I feel very much at home when I visit Germany, which I do around once a month."

So kudos to David for setting his own path, as he did in 2006 when he opened Dancing Camel, Israel's first craft brewery.
Posted by Doug Greener at Wednesday, January 10, 2018