Since we are a (sort of) traditional Jewish family living in Israel, but still with strong familial and cultural ties to the U.S. of A. (the "old country"), we try to celebrate Thanksgiving, but normally move our Thanksgiving meal from Thursday to Friday night, joining it to our Sabbath meal. 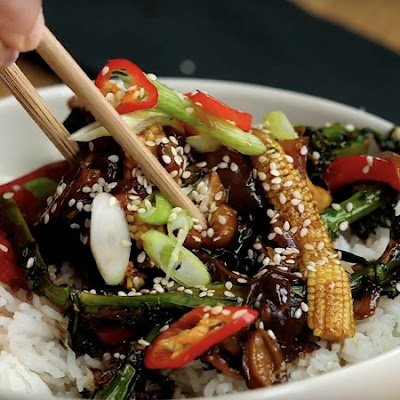 This year we actually did both.  And it gave me an opportunity to continue with my exploration and appreciation of sour or "wild" beers.  Here's what we did:

On Thanksgiving Thursday, I made a vegan Sweet 'n' Sticky Stirfry, about as far as you can get from the traditional turkey and stuffing and sweet potato pie.  (However, in a nod to tradition, Trudy made a beautiful pumpkin pie.)

As the name says, the stirfry was indeed sweet.  Why not pair it, I thought, with something sour?  Since we are still waiting for an Israeli brewery to make a sour beer,  I had to use an import.  I was lucky enough to have a cold bottle of Lindemans Geuze Lambic Beer, imported from Belgium.

Geuze is a born-in-Belgium beer style in the lambic family, but not as sour and acidic as straight lambics.  It has traditionally been prepared by blending young and old lambic beers which have been fermenting in wooden barrels to achieve their sour character.  The younger beer is less sour than the older and still contains fermentable sugars.  When mixed with the older beers and bottled, you get a second fermentation and a beer that is complex, balanced, acidic and well carbonated -- geuze. 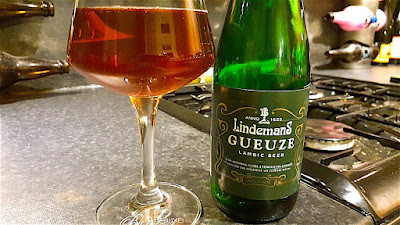 The Lindemans geuze (5% alcohol) uses a new technique which filters the beer and adds CO2 and candy sugar to a year-old lambic, making it slightly sweeter and more carbonated than the traditional "old geuze" style.

Nevertheless, it was still plenty sour for novices to this style, which I am.

But I must say it worked.  The sweetness and richness of the stirfry was cut by the carbonation and the sour fruit and apple taste of the beer.  I also detected some vanilla and caramel in the taste, which added to the mix.  Sweet and sour is a very acceptable combination of tastes for our western palates. My mouth enjoyed putting them together, even though they came from two different sources!  What an interesting way to do Thanksgiving.

The sour geuze was also not bad with the sweet pumpkin pie. 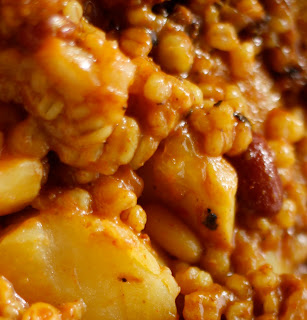 The next night, we had cholent, a traditional Sabbath stew made with beans, barley and potatoes.  Some people add meat, but in our vegetarian kitchen, Trudy uses soya chunks and veggie hot dogs.  Many people leave the cholent in a warm oven for the entire night, to make it even thicker and creamier for the Sabbath lunch.

We paired our cholent with the only commercial pumpkin beer made in Israel -- Pumpkin Ale from the Galil Brewery on Kibbutz Moran in the central Galilee.  In America, pumpkins are forever intertwined with Thanksgiving and the month-earlier holiday of Halloween.

So the cholent-pumpkin ale combination was in some way the opposite of the stirfry-geuze.  The cholent was salty and spicy, eaten together with a pickle and mustard, while the pumpkin ale was fruity and malty with sweet spice.  It was not a perfect pairing, but an interesting one which still had echoes of the harvest holiday. 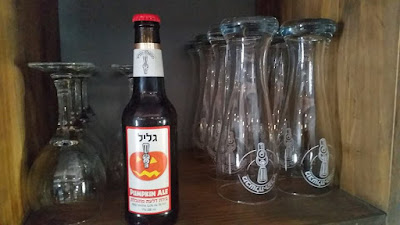 It seems to me that the Galil Pumpkin Ale, which has been coming out every fall for at least five years, has become stronger in the taste of dla'at (which is the nearest Israeli gourd to the American pumpkin) and pumpkin pie spices.

The ale is a brown amber color with a thin head.  Alcohol by volume is 5.1%.  The aromas are not very pronounced, some spice, caramel and malt.  The label does not say which spices are used in the beer, but I was able to taste some cinnamon and nutmeg, in a sweet envelope -- the same as were in our pumpkin pie.

There was still some beer left over to accompany my pumpkin pie, and in this case they complemented each other quite well.  A nice ending to the Greeners' two-day holiday of Thanksgiving.
Posted by Doug Greener at Monday, December 11, 2017