If you're a beer shopper in Jerusalem, you've probably noticed some fancy bottle labels on Shesh Achuz (6%) Kapara beer from the Herzl Brewery.  For example, there's a pioneer woman swilling a bottle, a desert island shaped like a bottle cap, a mustachioed face, a buxom bathing beauty, and just figuratively used calligraphy. 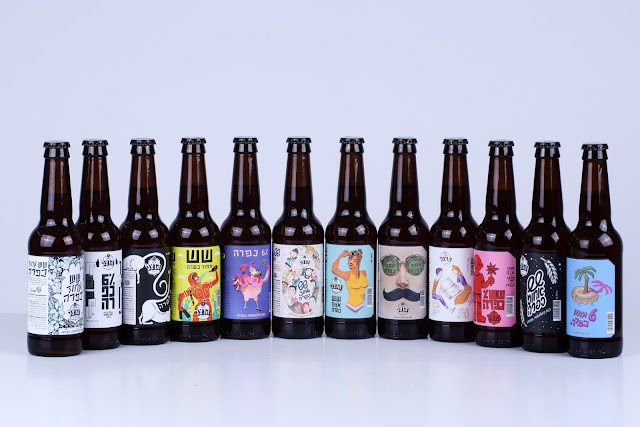 All of these labels were designed by students in the Visual Communication Department at Shenkar College of Engineering and Design in Ramat Gan.  Maor Helfman, a partner at the Herzl Beer Workshop, established contact with Shenkar and suggested that the students present their ideas for labels.

The school agreed and the students went to work, doing research on the brewery and the beer, a British-style mild ale, with a pleasant malt sweetness and low on hop bitterness.  Sixty students participated in the project, and 12 were chosen to have their designs printed and pasted on the bottles -- 200 bottles for each of the winning labels.

I wanted to tell you the students' creative thought behind some of the designs.  I asked the person at
Shenkar who organized the project, and she promised to send me a list of the winners whom I could contact.  But she never did.  Sorry about that.

The results of the label project, according to Maor, were "fantastic."  People called the brewery and asked where they could find the special bottles.  Sales went extremely well, as beer enthusiasts snatched up the bottles, not only to enjoy the beer but to collect the labels.

Nevertheless, I did notice that up until a few days ago, there were some bottles still on the shelves in beer and liquor stores in Jerusalem; for example, Beer Bazaar, Beerateinu, Hamisameach, Nechemia Brothers, and Aggripas Drinks.  If you hurry, you may be able to find one or two still left.

This was a great idea from Herzl: good for the brewery, good for publicizing Israeli craft beers, and good for the Shenkar students who got some practical experience in designing for the real world.
Posted by Doug Greener at Tuesday, October 17, 2017