A free-style wheat beer from Blinderweiss

I first met Michael Blinder on a visit to Haifa to see my number three son and his wife.  Michael wanted to introduce me to his first commercial scale beer, Blinderweiss -- a three-syllable mouthful that's as fun to say as the beer is to drink.

But I'm getting ahead of myself.

I met Michael, who lives in Hadera, and his very energetic marketing man, Neta Koltin, in the LiBira Brewpub (the subject of another article someday).  I met Michael again at the big BEERS Festival in Tel Aviv in August (refresh your memory here).

Michael began home-brewing three years ago, and from the beginning was aiming to achieve a very specific taste for his beer.

"Everybody brews in their own way," Michael explains.  "It's not just the recipe that determines the final product.  It's everything the individual brewer does.  Blinderweiss represents the taste that I wanted to attain."

Michael began to brew Blinderweiss commercially at the Mosco Brewery on Moshav Zanuach in January, and the beer was ready for distribution one month later.  "We had to do a lot of experimentation until we achieved the same beer at Mosco as we had at home," says Michael. 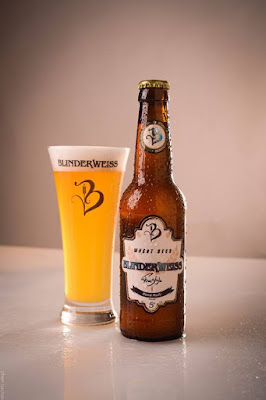 Blinderweiss, as Michael describes it, is a free-style wheat beer.  Its style is closest to an American wheat ale.  Although malted wheat is 65% of the grain bill, it does not use typical wheat beer yeast, and it is heavier hopped than most wheat beers.

There was no mistaking this in the taste test.

Blinderweiss may look like a wheat beer, pouring out a very cloudy pale yellow color with a full, white head, but the aroma lacks the usual banana-cloves of a German wheat beer (hefeweizen).  Instead, there's a lot of citrus, spice, hops and hay.  On the tongue, you get more fruit, caramel, yeast, and even vegetal flavors.

Bitterness is moderate and the finish is roasty and long-lasting.  Alcohol by volume is a kind 5%.

Since I am not a fan of hefeweizens, I found Blinderweiss to be a most enjoyable beer.  As far as food pairings go, I think of Blinderweiss as an AB universal recipient of the beer world, that is, it would go well with almost all foods.

Neta Koltin told me that Blinderweiss is now on sale in stores and pubs in the Haifa to Netanya area, as well as in Jerusalem and Rehovot.  He is continuing to expand the distribution.  Production now stands at 1,400 liters per month.

Though they are heavily emotionally and financially invested in brewing, Michael and Neta are keeping their day jobs for the time -- Michael as a fresh flower exporter and Neta working at Radio Haifa.  Michael's business partner is Roman Shih.

I asked Michael if there are plans to brew other styles of beer, and what would they be called, since the "weiss" in Blinderweiss dictates that it could only be a wheat beer.

"For now," Michael answered, "we are concentrating on this beer since we believe it's really the best.  If there are new beers, I guess they'll be called 'Blinder-something.'  We'll just have to wait and see."
Posted by Doug Greener at Thursday, October 26, 2017