Wheat and mango in new beers

I've just had the pleasure of tasting two pretty new beers which are now being sold in beer specialty shops and selected liquor stores.  They are quite different, but both in my opinion are welcome additions to the craft beer panoply in Israel. 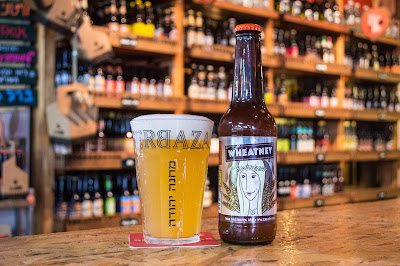 The Beer Bazaar Brewery in Kiryat Gat (known in Hebrew as Mivshelet Ha'aretz) has come out with Wheatney, their own version of a German-style wheat beer ("weissbier") for the "Israeli taste."  As I've written before, wheat beers seem to very popular in Israel and every craft brewery wants one in its repertoire.

Lior Weiss (no relation to the beer), a partner and brewer of Beer Bazaar, told me that Wheatney is based on his unique recipe of Pilsner malt, wheat and rye.  The alcohol by volume is 5%, very comfortable if you're having more than one on a hot day.

Wheatney is straw colored, slightly hazy, with active carbonation and a huge frothy head.  The aroma is very typical of this weissbier style: banana and cloves, but with an herbal background from the hops and some toasty malt.  The flavor is also quite marked by the banana and cloves, with the hops adding fruit and spice but very little bitterness.  The finish is sweet and medium lasting.

If you're a wheat beer fan, and apparently many Israelis are, you can't go wrong with Wheatney.

HeChatzer Brewery ("Back Yard Beer") has introduced another version of their popular mango beer Kruzo, called Double Kruzo because it's made with twice the amount of mango and twice the amount of dry hopping.  (Read about Kruzo at last year's Jerusalem Beer Festival here.)  The beer is brewed in commercial quantities at the Srigim Brewery.

Double Kruzo is at base a pale ale.  The color is hazy pale orange, with an active carbonation that I appreciated.  The aroma was very hoppy, with citrus and tropical fruits being dominant, and some grass.  The bitter mango comes through in the taste, though very understated; in fact, not much more so than the original Kruzo.  Other fruit tastes are also there from the Magnum and Citra hops: citrus, tropical fruits and pineapple.  The mouthfeel is very creamy, and the finish moderately bitter and refreshing.  Alcohol by volume is 5.3%.

HaChatzer partners Yochai Maytal, Ariel Chinn and Shachaf Ashkenazi have demonstrated their talent and innovation on numerous occasions, and Double Kruzo is definitely further proof of that.
Posted by Doug Greener at Friday, September 08, 2017