New beers from Jem's, Alexander, The Dictator, and Oak & Ash

New beers keep coming across my desk -- on the way to my refrigerator -- and I'll try to write about them in the order they arrive, more or less.

While it's still summer, let's get a hold of this year's version of Jem's Summer Ale from the Jem's Beer Factory in Petach Tikva.

This is a light in color and in strength (5% ABV) pale ale made for summertime drinking.  For those who have doubts or questions, the name tells you so!

Our bottle poured out the color of clear ginger ale with very little foam.  There was some lemon in the aroma, but very little hop presence.  On the palette, we got more lemon, some dankness, and a touch of apricot.  The overall impression was that of a light lager with a dry, refreshing finish.

I and my drinking partners simultaneously came out with the words, "beach beer," because this is a perfect beer for the lazy days of summer, packed in ice on the beach, or taken from the fridge during or after a long, hot day. 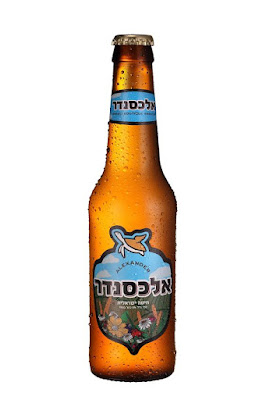 The Alexander Brewery in Emek Hefer has brought out its own version of a wheat beer, called an "Israeli wheat."  It seems as if every Israeli craft brewery wants a German-style weissbier (also known as weizenbier or hefeweizen) in its repertoire.  Some brought one out as soon as they opened; for others like Alexander, it's taken longer, but they're all getting there.  The Israeli public has made it clear that they like wheat beer.

In strength, color and aroma, the Alexander Wheat is typical for German-style wheats: 5% ABV, hazy pale, with unmistakable scents of cloves from the wheat ale yeast.  It's taste, though, is spicier that European wheats, with hints of fresh pumpkin pie spices.  Well-balanced; neither overly sweet from the wheat malt nor very bitter.  The finish is mild and refreshingly bitter.  This is a beer that was designed to help us cope with our Israeli summer.

I was introduced to weissbier in Germany by my friend Chris exactly 50 years ago.  I thought it was a beautifully thirst-quenching beer that we chugged down in heroic quantities.  "The first gulp has to be for as long as you can make it," I remember Chris coaching me.

My tastes have changed since then, but this Alexander Wheat beer brought me back to those days. 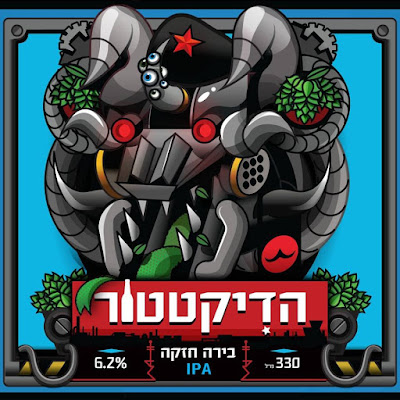 The latest beer from the Dictator Brewery (made at the Beer Bazaar Brewery in Kiryat Gat) is an India Pale Ale, another style that is now becoming a "must" for every craft brewery in Israel.  Brewer Yotam Baras has departed from his tradition of putting human dictators on his beer labels.  The IPA features the Biblical "iron beast," the fourth beast envisioned by the Prophet Daniel in chapter 7, verse 7:  ". . . awesome and dreadful and exceedingly strong, and it had huge iron teeth . . .".   The graphic artist has visualized this monster into a fearsome sight.

The beer inside, however, is much tamer.  It's a strong (6.2%) IPA that supplies all the bitterness you want.  The color is a hazy orange-copper, and the dominant aromas are citrus (mainly grapefruit and orange) and pine resin.  On the palette is more bitter citrus and yeast, balanced by a gentle malt sweetness -- a very tasty and refreshing combination.

Bottom line: One more very drinkable Israeli IPA, but not breaking any barriers or pushing any envelopes. 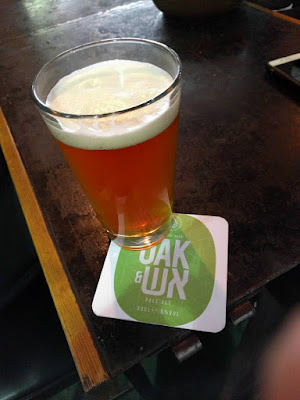 Oak & Ash is a new beer brand being brewed at the Dancing Camel Brewery in Tel Aviv.  In fact, the founder, owner and head brewer of Oak & Ash is Asher Zimble, who is the head brewer at Dancing Camel.  He got seized by the entrepreneurial spirit and decided to brew his own beers, reaching an agreement with Dancing Camel owner David Cohen to bring in new equipment for the betterment of the entire brewery.

As the name more than implies, Oak & Ash has adopted a brewing plan which calls for conditioning its beers with oak wood.  This is a process which I mentioned in the past, noting that I have difficulty discerning the presence of oak aging in beer.

That changed when I tasted Oak & Ash's first beer, a Rye Pale Ale, 5.5% ABV, hazy and golden orange color, and very fruity.  For the first time, I got the wood in the aroma and the taste.  Whether it was oak or maple or mahogany, I couldn't tell you, but it was certainly wood.  "Like the smell after you saw wood," is how my drinking partner Moshe put it.

We also detected strong hop aromas of citrus and spice.  The taste offered a complexity of bitter fruit and spice, with ripe tangerine and kumquats standing out, but also malt and caramel.  Although "rye" is in the beer's name, we were unable to find any traces of it in the aroma or flavor.  We are always trying to upgrade our olfactory and gustatory radar, but somethings are still out of range.  The body was medium, with a long dry finish.

A second beer from Oak & Ash, a Wheat Ale, has recently come on the market, and I will write about it in the future.  David Shamis, in charge of sales and marketing, told me that the brewery also plans on introducing a German-style Bock Lager and an Irish Red Ale, both also conditioned with oak.  Something to look forward to.
Posted by Doug Greener at Monday, August 28, 2017