Could this be the end of the beer festival season?  Probably not, but three more festivals are on tap for next week.  That should effectively bring us to the end of August, the end of summer vacation, and the time when our thoughts turn to the High Holiday season and the start of a New Year.  So before that happens, go out and drink some beer, eat something, absorb the music, and laugh with friends in the company of fellow beer lovers. 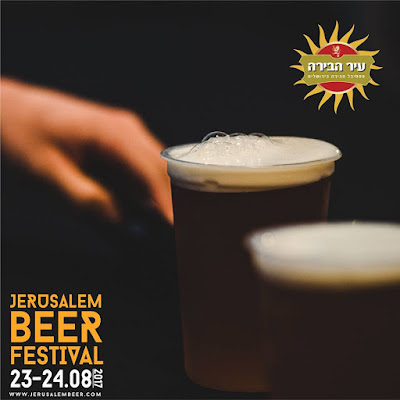 This one is on my home turf.  One of my favorites, and not only because I can jump on a bus or the Light Rail and be home in a few minutes.  The Jerusalem Beer Festival has tradition on its side -- this is the 13th straight summer it's being held -- and in recent years has taken place over a huge area in the central Independence Park (Gan Ha'atzmaut), a beautiful setting for any festival.  Impresario Eli Giladi puts his soul into making everyone feel welcome and attaining just the right mix of beer, food, music and ambiance.

The Festival will take place next week on Wednesday and Thursday, August 23 and 24, from 6:00 p.m. until midnight.  Eli promises that 120 different beers from Israel and abroad will be flowing.  The popular music groups Knessiyat Ha Sechel and Hayehudim will take the central stage on Wednesday night, followed by Muki and rapper Nechi Nech on Thursday.

Entry costs 45 shekels, and discounted tickets of 40 shekels are available to students, soldiers and National Service, holders of the Jerusalem Card, and people with disabilities.  You can order tickets online in English at:  http://www.jerusalembeer.com/en

I intend to attend on Thursday, August 24.  As is my wont, I will get there early on with my entourage of friends, imbibers, and fellow judges, and leave before the flood of crowds begins.  If you see me, please come over and say hello.  I pose for selfies. 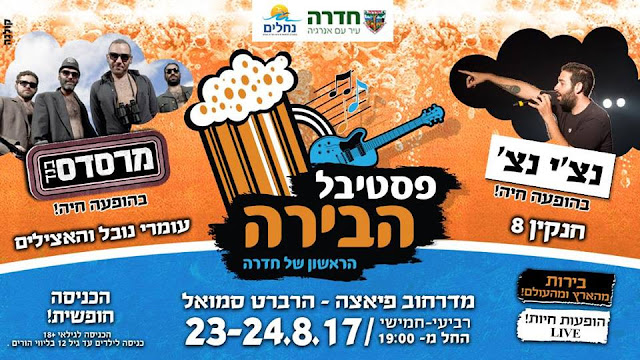 For those further north, you can attend the world's first Hadera Beer Festival on the same days as Jerusalem's.  Here admission is free, beginning at 7:00 p.m., on the Piazza Pedestrian Walkway, Herbert Samuel.  Dozens of local and foreign beers will be served; food will be sold, and giant "knightly" tables will be available for sitting, eating and drinking!  Live performances include the Mercedes Band and rapper Nechi Nech. 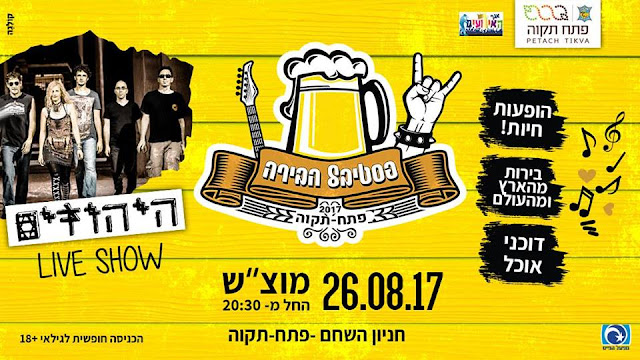 Beginning on Saturday night, August 26, at 8:30 p.m., the Petach Tikva Beer Festival opens on the Shacham parking lot.  Entrance is free to all those over 18; younger children may also attend but they have to be accompanied by an adult.  Over 45 Israeli and imported beers will be available, along with stands selling street food and more "knightly" tables.

There will be a live performance by the popular group Hayehudim ("The Jews").  Fitting name for a beer festival in Israel, I guess.  As long as the music is loud and keeps on coming!