I hope you're all in the mood for more beer festivals because they're still comin' at us.  Here are three which have come to my attention.  Pick the one sort of near you and consider going. 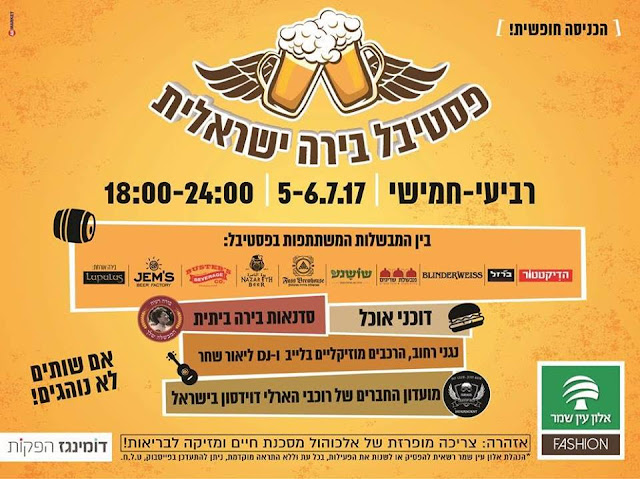 There's not too much publicity about this one, except that it's taking place on Wednesday and Thursday, July 5-6, at the Alon Ein Shemer Fashion Mall at the Karkom Intersection.  6:00 p.m. to midnight, and admission is free.  There will be stands for Israeli craft beers and imported beers, food and live music.  The Harley-Davidson Club in Israel is also taking part, but I'm not sure what that means.

The Israeli brewers who are scheduled to appear include: Fass, Buster's, Nazareth Beer, BlinderWeiss, Ottobira, Jem's, Srigim, and The Dictator.

The Mateh Yehuda Beer Festival has always been one of my favorites.  It captured just the right evening atmosphere, music, food and local beers.  Then it stopped happening for a few years.  So I'm really happy to learn that it's come back this year.

It's being held at the Mini-Israel Park near Latrun on Wednesday and Thursday, July 12-13, beginning at 8:30 in the evening.  Admission is 38 shekels, which includes a tasting glass which you keep and the first two tastings.  Six local brewers will be selling their beers (Pepo, Srigim, Shapiro, HaShachar, Mosco, and Buster's), plus a number of other brewers from different parts of the country.  Food and live music?  Of course. 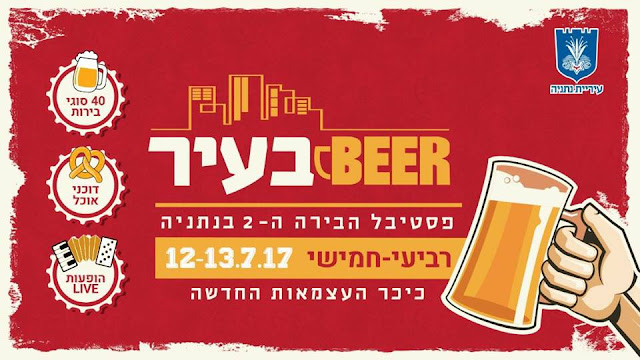 On the same two days, July 12 and 13, the second annual Beer in the City Festival will be taking place at Kikar Ha'atzmaut (Independence Square) in Netanya.  Technically, you can go to the Mateh Yehuda Festival on one night, and to the Netanya Festival on the other.  I'm sure you'll enjoy them both, but quite a few of the beers will probably be the same.  We are a little country, after all.

Anyway, the Beer in the City organizers promise 40 different kinds of beers (Israeli craft and foreign), live performances and stands for street food.  Entrance is free and the doors open at six o'clock each evening (and close at 1:00 a.m.)