One of the most pleasurable new beers I've had recently is called TropicAle and is contract brewed by Yuval Katz at the Beer Bazaar Brewery (Mivshelet Ha'aretz) in Kiryat Gat.  His beer label is named Ketta, a Hebrew word meaning portion or section or paragraph.  It's a word widely used in Israel and Yuval says "it just seems to fit."  So be it.

Yuval is from Herzliya and has been home-brewing since 2010.  In fact, in 2012 (before I started this blog) an early version of TropicAle won Best-in-Show in the prestigious Samuel Adams LongShot home-brewing competition.  A few months ago, Yuval girded his loins and began to brew commercially.  "It seemed the next logical step," he says, "sharing my passion for beer with the world."  Yuval is, however, keeping his day job as content editor at HT Zone, an online consumer club in Kfar Saba for high-tech employees.

Yuval calls TropicAle a "New England pale ale," [NEPA] which is not exactly a recognized beer style ("New England IPA" is), but is being widely used.  It signifies a pale ale that is full of fresh fruit flavors, hoppy but not overly bitter, and unfiltered.  This suits TropicAle to a T.  The alcohol by volume is 5%. 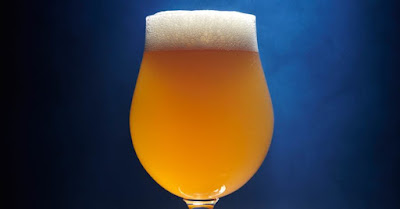 TropicAle pours out a hazy, bright orange color, with a strong hop aroma, redolent with citrus, tropical fruits and grass.  But it's the taste you're really waiting for.  In addition to the citrus, my drinking partner Moshe and I detected passion fruit, mango, pineapple and banana.  A little imagination goes a long way, of course, but I don't think anyone would miss the powerful "fruit shake" character of this beer.  The finish is long and bitter, which has you wanting to take another gulp.

Yuval says that he was aiming to achieve a hoppy and fruity beer "that doesn't compromise on taste."

I would say that he definitely succeeded -- and so, it seems, does the beer drinking public.  "I was blown away by the sales at the Beer Bazaar," Yuval marvels.  "To me, it shows that Jerusalem beer drinkers are more open to trying something different.  In Tel Aviv, everybody chases the latest trend.  In Jerusalem, if they like it, they drink it!"

Yuval plans on bringing additional beers to market under the Ketta brand.  These include an English porter, saison, and Belgian quadrupel.

If Yuval can maintain the quality standard of TropicAle, these are beers you should be looking out for!