Way back in April, the winners were announced to the B'tsisa home-brewing competition, another one of Israel's growing list of beer contests.  B'tsisa (which means "In Fermentation"), however, is no johnny-come-lately, but one of the more prestigious competitions for home-brewers in Israel.  (Read about last year's contest and ceremony here.)

Sponsored by the Beer & Beyond store and activity center in Tel Aviv, the exhibit and ceremony this year was held at the Weihenstephan Biergarten in the Tel Aviv port.  I didn't attend, but I was able to hustle, make contact with some of the winners, and taste their beers.  That's why this is s-o-o-o late.

Of these, I was able to find and taste Omer Laser's Belgian Strong Dark Ale, Asaf Murkes' Weizenbock, Elad Talbi's IPA, and Noam Shalev's Fruit Beer (Peach Lambic).  I'm going to tell you about them because they're winners all -- but you're not going to have a chance to taste them because they're all non-commercial home-brews.  Sorry.

This is one powerful beer, although at 9%+ alcohol by volume (Omer doesn't remember if it's 9.2 or 9.7), it's actually in the mid-range for this style.  It pours into your glass an opaque dark brown topped by a thick and foamy tan head.  The aromas are burnt caramel, dark chocolate and toasted malt.  At first taste, you're hit with an almost undecipherable mix of flavors: raisin, caramel, carob and figs.  Of course, it's sweet, but nicely balanced by hops in the background.

You feel the high alcohol content rather than taste it; a positive attribute.  The body is full, almost I would say syrupy, much like a home-made fruit wine or liqueur.  This is a beer which will perhaps go well with salty and other strong cheese, and grilled and roasted vegetables.  It would easily overpower most other food.

Omer has tackled a very complex beer style and came out on top.  I don't think the Belgians themselves could do it any better.

Thirty-year-old Elad Talbi from Tel Aviv took the Session IPA gold for his beer.  "Session beer" simply means is has a pretty low alcohol by volume (in this case 4.99%) so you can have more than one during a drinking session!  Elad has been home-brewing for a year and this is his first competitive entry.

The beer I got from Elad was not exactly his winning entry, but something close enough, he said.  He called it "somewhere between a blond and a session IPA, less aromatic and less bitter" than his winner.

So with that in mind, I poured out the beer he gave me, a clear amber color with a very creamy head and full carbonation.  There's a wonderful aroma of pineapple and pine, which are also in the taste, along with perhaps some apricot.  The taste begins sweet and ends dry and bitter.  Very interesting how that happens, and of course, it's that kind of finish that make you want more.  Although this bitterness is very pronounced, it does not interfere with the hop and yeast flavors.

Even though I didn't have his winning beer, the beer I tasted was also a winner in my book.

Home-brewer Asaf Murkes from Modi'in entered a perfectly brewed Weizenbock (a strong wheat beer) in that category and won.  The others might have also been great, but we only tasted Asaf's.

Although Weizenbocks can be dark in color, this one is pale and clear, with very creamy foam.  The aromas are spicy cloves from the wheat ale yeast, but also apple cider and some vanilla.  Almost no hops are detected.  The flavors are pretty complex but almost all in the spicy range.  The heavy carbonation gives the glass a look of sparkling white wine.  The body is full, rounded out by the malt-sweet backbone.  Alcohol by volume is a hefty 6.7%.

Asaf, in our opinion (mine and drinking partner Moshe's), has nailed the Weizenbock style as good as any I have tasted.  Someday, an Israeli-brewed Weizenbock this good will be available commercially.  Until then, I'll just have to remember how Asaf's winning beer tasted -- and you'll have to believe me. 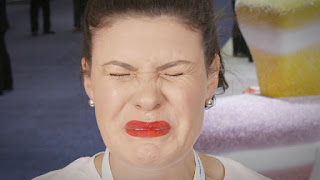 Nothing on this blog has been more difficult for me than giving an opinion on Noam Shalev's Peach Lambic beer, which won first place in the Fruit Beer category.  I do not have the tools or the taste for doing justice to this style of sour Belgian beers.  I still can't get beyond my initial reaction to the sourness, but I am aiming to overcome this.

So let's do this:  This report on the B'tsisa winners is late enough.  I'll stop here and post what I've written until now.  Then I'll devote some time to Noam's Peach Lambic and write about it in a future post.  Not too long in the future, I promise.  We all should know more about sour beers.
Posted by Doug Greener at Wednesday, July 19, 2017