Here we go again!  Beer festivals are continuing to pop up all over the country.  They're not even waiting for the summer.  Here are two more for this month. 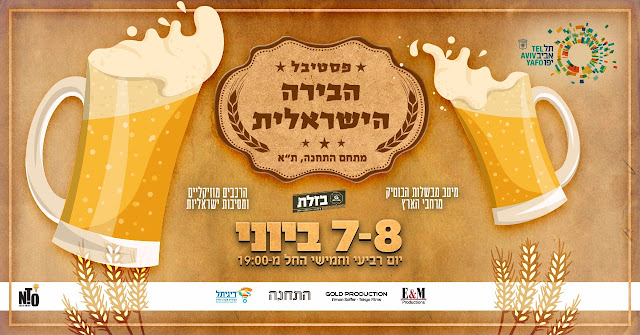 
In just another few days, another beer festival will open at the Train Station (Hatachana) in the Neveh Tzedek neighborhood of Tel Aviv.  Despite its rather overarching name, this is the first attempt at a beer festival by the event production team of Arnon Sofer and Sagi Epstein of Gold Productions.

I asked Arnon why he thought Tel Aviv needed another beer festival just a few months before the huge annual BEERS Exhibit opens in the same location.

"They have beers from Israel and from all over the world," Arnon explained.  "We will only have Israeli craft beers on display.  We will give Israeli beers the respect that is due to them."

Okay, fair enough.  But I wonder if that is a big enough difference to get the crowds that they need to be successful.  We'll know in a few days.

The Israeli Beer Festival will take place on Wednesday and Thursday, June 7 and 8, opening at 7:00 p.m. each night.  Tickets cost 70 shekels at the box office, which includes five beer tastings.  If you order the tickets ahead of time online, the price drops to 53 shekels (order at https://www.baligam.co.il/search or www.tixwise.co.il/israbeer-fest).  If you have a digital Tel Aviv Residents card, the price is only 47 shekels.  Any questions about tickets, etc., can be directed to Arnon at 052-620-7297.

The Israel Beer Festival is under the patronage of Bazelet Beer (Golan Brewery).  As of now, the following breweries will be displaying: 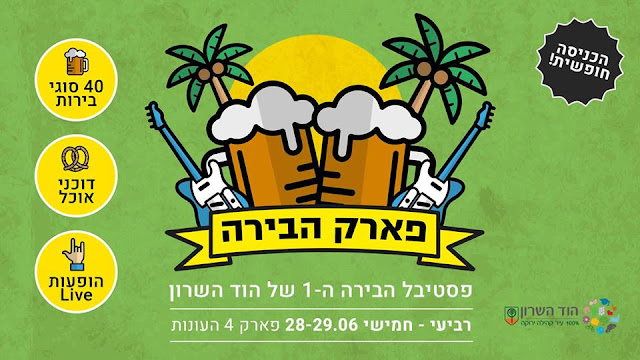 The first beer festival in Hod HaSharon will be held Wednesday and Thursday, June 28 and 29, at the Four Seasons Park.  The festival opens each day at 6:00 p.m.and entrance is free.  The organizers, BarDan Productions, promise over 40 kinds of beer from Israel and abroad, booths for street food and other items for sale, and live music.  It is being billed as a festival for students, families, and all those to whom beer gives a smile!

If you like beer and live in or around Hod HaSharon, this festival is meant for you.

I'll end with a few suggestions about beer festivals: Don't try to attend every festival that pops up.  There will be a lot of them this season; a lot more than last summer.  Have fun, but pace yourself.  Make arrangements with friends for getting together and getting home safely with a designated driver or public transportation.  Here are some links to articles which give you advice on how to get the most enjoyment out of beer festivals.
http://www.wikihow.com/Enjoy-a-Beer-Festival