As I promised (here), below is your free, handy map of the famous Machane Yehuda market in Jerusalem, with the names, locations and photographs of the bars serving Israeli craft beers on tap.  It's a jpeg version which you can open, save and print at any size you want.  Use it when you visit the market to find out where you can go to enjoy excellent Israeli craft beer.

Please tell the bartender you read about them on Israel Brews and Views.  Don't be taken aback when s/he looks you straight in the eye and says, "What's that?"  Just show them the map.  And have a good time.  Thanks.

These bars are also on an illustrated pub crawl video which you can access on the Wish Trip application.  Here is the link: 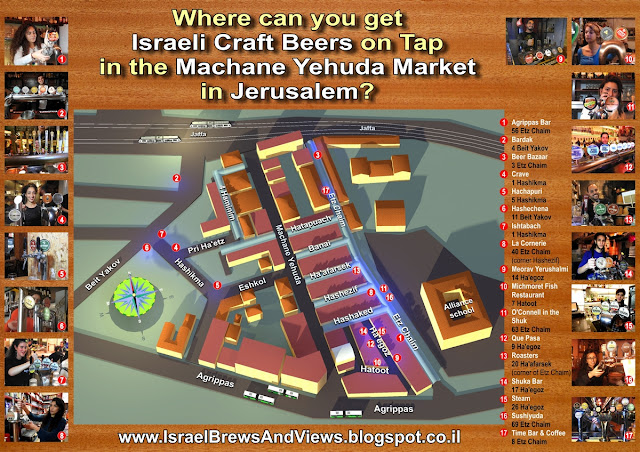 It's a shame you can't go out a buy a bottle.  There are a few fine Israeli stouts out there, but nothing quite like Touching Darkness.
Posted by Doug Greener at Thursday, April 20, 2017 No comments: Denny says that he hopes that Israeli beer drinkers will now be able to enjoy Pilsner beer without having to buy it from Europe.  I concur.  Buster's Pils is a credit to the style, and an excellent way to introduce yourself to Pilsner beer.
Posted by Doug Greener at Saturday, April 08, 2017 1 comment: