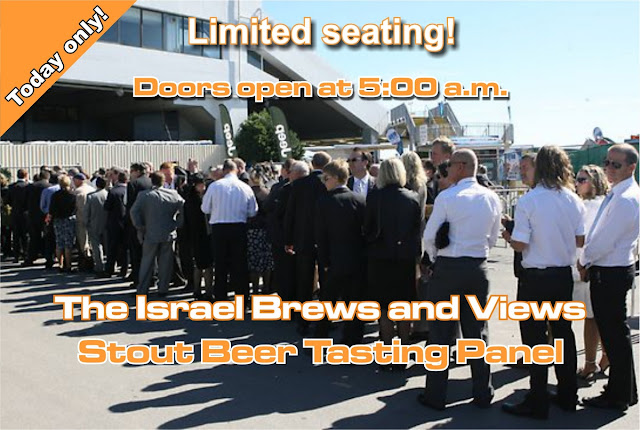 I know, the suspense must be terrible.  What were the results, you've been asking, of the Israeli Brews and Views Stout Beer Tasting Panel?

Well, we recently met in convivial assembly to taste and rate six Israeli brewed stout beers.  We chose stouts which are produced by the most commercial of our micro-breweries, and are therefore available in bottle shops and beer specialty stores throughout the country.  We also chose stouts which had no added ingredients or extraordinary production methods, but were classic stouts in the British or Irish traditions.

In the future, by the way, we hope to have separate reviews for those wonderful specialty stouts which are also being brewed in Israel -- oatmeal stouts, milk (or sweet) stouts, smoked stouts, Imperial stouts, oak aged stouts, and perhaps others.

Our panel was expanded to 11 judges and, as you know, the more judges, the more truly representative are the results.  Our judges were men and women, young and old, urban and rural, sabras and immigrants, beer geeks and beer guzzlers.  Because we are not professional judges or tasters, I believe we encapsulated the tastes of the wider Israeli public.

Stouts are black-as-night beers, where you should expect full, roasty tastes, some astringency and a dry finish.  The hop character can be variable, but generally the bitterness comes from the roasted barley itself.  The distinctive flavors can be chocolate and/or coffee, of course, but also caramel, dark fruits like plums or prunes, and even licorice.

Chronologically, porter beer was developed before stout, in London, probably during the 1720s.  It became popular among the city's porters (from where it got its name, of course), who enjoyed its strong taste and high alcohol after a long day's work.  Porter was brewed in different strengths, and the strongest of these came to be called "stout porters," quaffed only by stout-hearted men, no doubt.  Before too long, "porter" was dropped from the name, and the beers were called simply "stouts."

Today, porters and stouts are kind of interchangeable, but in general, stouts tend to be darker, roastier in taste, and drier than porters.

We tasted our six stouts completely blind, as we've done in all of our past Tasting Panels.  All glasses just had a number on them, corresponding to a beer which only the servers knew.  The judges recorded their impressions on a specially prepared page and when they were finished, gave each beer a ranking.  The best beer received six points, number two got five points, and so on.  All the points given to each beer were counted to obtain the final rankings.

The results were not a close field.  The highest ranking and the lowest ranking beers were separated by 22 points.  There was a pretty clear winner and a clear loser.

The results also demonstrated something very interesting: Even though there were major differences in the individual tastes of our judges, we were basically on the same page in ranking the beers.  For example, the winner got five "6 point" votes (the highest) and three "2 points."  Number two got three "6 points" and one "1 point."  Number three got one "6 points" and a bunch of 5s, 4s and 3s -- a good middle position.  At the other end, the lowest ranking beer got four "1 point" and one "5 points."

And here, without further ado, are the results of their judgment:
Sixth Place:
Jem's Stout -- This is a classic dry stout from Jem's Beer Factory in Petach Tikva. with 5% alcohol by volume.  Several of the judges mentioned that they normally enjoy this beer, but it did not do well in the head-to-head competition.

Second Place:
Malka Stout -- From the Malka Brewery on Kibbutz Yechiam in the Galilee.  An Irish-style stout, at 6% ABV.

First Place:
Lela Mild Stout -- From Lela Beers, brewed by Eli Bechar, with offices in Maccabim but brewed at the Mosco Brewery.  5.2% ABV.  While not unanimous, most judges gave Lela high marks, even though it beat the second place beer by only three points.

So congratulations are in order to Eli Bechar of Lela Beers.  His Wheat Beer came in First Place in a previous Israel Brews and Views Tasting Panel for Flavored Wheats.  Lela Beers are not widely distributed, but can be found in beer specialty stores in major cities, as well as in a number of bars and restaurants around the country.

We would also like to thank the Beer Bazaar and Beerateinu in Jerusalem for facilitating the delivery of the beers from the brewers to us.

And special thanks to Judge Mike Horton, photographer and graphic designer extraordinaire, whose magic camera transported the Esteemed Judges to the Roman Coliseum for a final "L'chayim!" 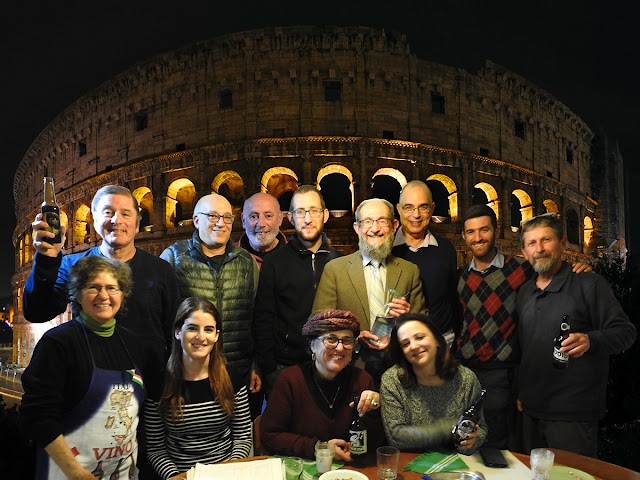