Our recent Tasting Panel for Israeli stout beers (see here) in no way covered all of the stouts brewed in this country.  In fact, there are several new stouts out there now, but they didn't qualify for our Tasting Panel because they are what I call "stouts plus" -- stouts with something extra; maybe smoked, sweet, oatmeal, oak-aged, or imperially enhanced.
Here, then, are reviews of two of them.  Stout beers are enjoyable throughout the year, though especially in the colder months, so now's a good time to try these.

Buster's Oak Aged Stout
Led by Master-of-Fermentation Denny Neilson, Buster's Beverage Company in Beit Shemesh started out making apple ciders and spiked lemonade.  But Denny was always a beer brewer at heart, and in fact was making and selling beers from his home in Mevasseret Zion even before Buster's was opened.  (One of these was the incomparable Chutzpah Double IPA which you can read about here.)  He also gives excellent courses in beer- and wine-making, and distilling. 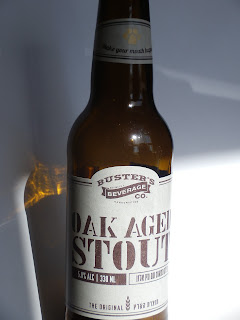 Buster's first venture into the commercial beer market is their Oak Aged Stout, a 5.8% alcohol stout aged with oak chips.  Denny says that this method is preferable to aging in oak barrels because the barrels would have to be disinfected with chemical sulfites, which would have an adverse effect on the beer.  "We don't like chemicals," he adds.

The beer is brewed at the contract brewery facilities, known as Abir Habar, of the Alexander Brewery in Emek Hefer.  Denny says that this is only until Buster's gets its own brewing system, hopefully by the end of the year.

The Oak Aged Stout pours out an opaque black-brown with a thin creamy head and aromas of coffee and bitter chocolate.  The taste opens with a sour astringency so appreciated in fine stouts, and develops into mild roasted coffee.  There's also a lovely chewiness and creaminess in the beer's texture, with a bitter ending.

My drinking partner Moshe and I felt that this was an excellent beer -- but where was the oak?  Perhaps the oak aging added to the tartness and the creamy mouthfeel.  As far as flavor goes, I must admit that I have never tasted oak wood, so I was not sure what I should be looking for.    Perhaps I owe it to my readers and myself to chew on some oak chips -- if I could just get over my fear of splinters between my teeth! 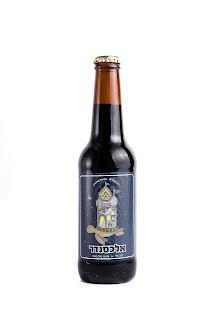 From the Alexander Brewery in Emek Hefer comes their newest seasonal beer, Imperial Stout.  Traditionally, imperial stouts are said to have originated in England in the 18th century for export to the court of the Russian czars and czarinas, who loved their beers black and strong.  For this reason, they are also known as Russian imperial stout.  Whatever the history, the style has become a popular craft beer brewed in the U.S. and Europe.  In effect, it is stout beer on steroids -- brewed with large amounts of roasted barley malt, highly complex flavor and high in alcohol.  These are beers meant for sipping, not gulping.

As the label says, Alexander Imperial Stout is made with added sugars, which boost the alcoholic content to a whopping 10.4%.  This is another dark brown to black beer with a thin tan head.  I loved the aroma: strong alcohol and with a wine-like essence.  A very thick and full-bodied beer, with tastes of roasted caramel, coffee, bittersweet chocolate, molasses and roasted malt.

Moshe thought it was "too alcoholic" -- that the alcohol got in the way of the other interesting flavors.   But I didn't find that a problem.  I enjoyed the warmth of the alcohol going down.  This is a fine winter beer: great by itself on cold days and nights, or with strong flavored foods, aged cheeses and dark chocolate desserts.

We're not through with "stouts plus" yet.  Keep your eye on Israel Brews and Views for more reviews of these surprising beers.
Posted by Doug Greener at Wednesday, February 08, 2017