We're on a roll here, people.  Doing a catch-up on Israeli stouts which didn't make it in to our Stout Beer Tasting Panel because they were brewed with special ingredients or processes.  Here are two more -- one an oldtimer, been with the brewery since the start, while the other has been out there for only a few months.

This beer from the Shapiro Brewery in Beit Shemesh is one of their three core beers, along with the Wheat Beer and the Pale Ale.  The Oatmeal Stout is 5.2% alcohol by volume, and is made, as you would expect, with the addition of oatmeal during the brewing process. 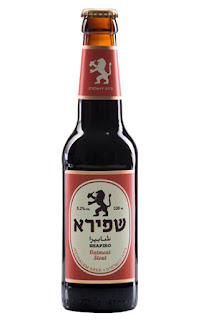 The beer pours a very dark brown with thin tan foam.  There are light aromas of malt, chocolate and coffee, but nothing really dominant.  The taste is bitter chocolate, perhaps some licorice.  The carbonation was quite strong and it has a mid-thick creaminess and body.  After sitting in the glass for a few minutes at room temperature, the chocolate and astringency were enhanced.

I guess there are people for whom the words "Oatmeal Stout" on the bottle will stimulate their imagination to smell or taste oatmeal.  But I wasn't getting it.  The oatmeal was probably the ingredient that gave this beer its creamy texture, which was quite an accomplishment, thank you.

During my Friday morning get-togethers with members of the Machane Yehuda Market "parliament," we sit next to a bar selling Shapiro Oatmeal Stout on tap.  It is by far, the most popular beer among us decision makers, as well it should be. 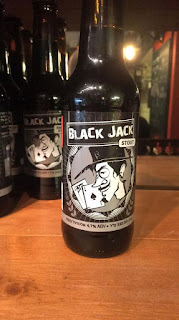 This is the latest bottled beer from the Beer Bazaar Brewery in Kiryat Gat, for sale at the Beer Bazaar pubs in Tel Aviv and Jerusalem, and other beer and liquor stores.  The delicate smoky taste comes from some of the malt which is smoked over an oak fire.  Alcohol by volume is 4.7%.

Black Jack is really black, with a medium beige head.  Strong aromas of sweet chocolate, roasted malt and espresso hit you right away -- a delicious combination.  The taste is mid-sweet, with notes of milk chocolate, caramel, and dried figs and dates.  It has a thin body, but a strong bittering aftertaste, and this is where you feel the gentle smoke.  Don't expect a very smoky experience.  This beer is well balanced between bitter and sweet, and also (in my opinion) with just the right amount of smoke.  A very enjoyable "stout plus."

To complete our exploration, my next post on stouts will include two Israeli home-brews -- one Imperial, the other merely regal -- and a surprise guest visitor from abroad.
Posted by Doug Greener at Monday, February 13, 2017